Student A and Student B after preliminary questioning about their role in the theft of a flash drive from their WTCC teacher collectively stated, "I don't know anything about it." After follow up questions both students stated that they had "momentary" possession of the flash drive but were unwilling to cooperate with efforts to recover the teacher property. The result was a 1/2 day suspension from their WTCC program with "severe obstruction" the code of conduct language cited in their disciplinary referrals. In a separate incident, Student C told a cashier in the cafeteria that he would not return his lunch tray to a server. The student had accrued over thirty dollars worth of charges and was required to eat a lunch that just met school nutritional standards, but was free of "extras" such as a la carte items and "hot" entrees. The student simply ignored the cashier and ate his lunch. This happened a few times until the main office got involved. In this case the effort was focused on answering the question, "Why aren't you paying?" As is often the case we found that there were paperwork challenges, financial hardships, family system issues and just general difficulties managing these types of tasks. The code of conduct was placed on hold until more details in regards to the preceding emerged. When the code of conduct was brought back to the table the conversations were focused on a payment plan that included school based service and regaining the trust of the cashiers and servers.

I bring up these two scenarios to illustrate just how much nuance there is in a decision to react to a behavior with restorative practices, a consequence or something in between. Here is a bit more context from U.S. Public Schools Are Suspending Millions of Students, by Julia Layton published no January 12, 2017, Last year, a high school student in Vestal, New York, called his teacher a "f**king racist" in class. Senior Vincent Spero, who says he was reacting to his teacher's use of a racial slur, was deemed a threat to the school. On Dec. 2, he was suspended indefinitely. At that time, statistically speaking, Spero became more likely to go to prison someday. U.S. public schools suspended 2.8 million students, or about 6 percent of its student population, during the 2013-2014 school year. That's about 10 percent more than 2000 numbers and more than double the suspension rates of the 1970s.

The School to Prison Pipeline: No one ever says they want to be a convict when they grow up. Julie and Robert look at the School-to-Prison pipeline and the variables that form this insidious system. Suspensions rose dramatically with the widespread adoption of "zero-tolerance" policies in the 1990s. Schools mandated suspension for any student bringing a weapon onto campus, amid "growing concern about crime and violence in schools," write reporters Libby Nelson and Dara Lind on Vox. [...]

Suspension doesn't address the issues that may cause a student's problematic behavior. And because students often see out-of-school suspension as "an officially sanctioned school holiday," it's hard to make an argument for deterrence. Yet inefficacy may be the least of school suspension's problems. An alarmingly vast body of research suggests the disciplinary measures employed in many U.S. public schools could be ruining students' lives.

[...] As for Vincent Spero, the student's attorney filed a lawsuit alleging Vestal High School exhibited racial bias when it suspended Spero for cursing at his teacher. The school has since rescinded the suspension, and Spero has returned to school.

On a typical day, I wake up at 5:00 AM and usually stay busy until about 8:30 PM, which is when my work is done and my daughter is asleep. That is, if everything goes smooth. Often, things out of the norm occur and my timeline is disrupted forcing me to pull my laptop out later. I am always thinking about efficiencies that will save me time. I came across the article, 9 Bad Habits You Must Break To Be More Productive and wanted to share it with you, as I know I am not alone in feeling overwhelmed sometimes. I found that I have some of the bad habits described in the article that may impact my production, a few being hitting the snooze button, falling asleep while watching something on my iPad and multitasking (which I thought was a strength, but apparently, it kills production). It’s an interesting read that made me think about adjusting my daily routines and work habits – hope you find it helpful.

Our current population is being extremely "hard" on our facility. Of late you have alerted me to food items being thrown against ceilings and walls, ceiling tiles/tables being broken and fixtures being damaged. Please be alert and redirect any behavior that may impact the facility. When you see damage snap a picture and make a mental note of the time and pass it along to the main office.

Effective Monday, January 30 most of the furniture in the freshman foyer will be relocated. Our current group is struggling with the freedom this space offers and as a result they will be relocated to the rear of the cafeteria.

Today in the LGI is our next After School PD Hour please consider a look at this article.

Subfinder (AESOP). If you are having trouble submitting for an absence please call Sharon VanHall at Boces at 1-866-334-6669. I am also able to put absences in subfinder at any time. (There is a certain cut off time for anyone else putting information in subfinder). So, please make sure you are letting the main office know one way or another if you are going to be out. I will also need the reason for your absence. (i.e. Personal Illness, Family illness etc.). We have had a few instances lately where we have been informed late in the day of an absence because it was never called in to sub finder or the main office. Thank you, Kyra Springett.

If you have any baking silicone or ice trays to donate to the Newark High School Art Club it would be greatly appreciated. We will be melting crayons into the molds to sell at the Empty Bowls soup dinner on March 30. If you also have any spare buttons, bottle caps, soda can tabs, ribbon, old broken crayons etc. we would love those donations, as well. Thanks for your time and contributions. From Mackenzie Westcott & the Newark High School Art Club.

Our sporting events are a great venue to undo some of the social and emotional stress our students experience. Recently, Mr. Corey took advantage of a few teachable moments to produce the following: "Our student section at last night’s boys basketball game had signs and some chants that were not acceptable and it is a major topic of conversation today in school. Most of these signs and chants referred to marijuana use by an opponent. Opportunistically, there is another boys game today where we expect an even larger crowd. I was not able to be on the announcements this morning so I’d ask for all of your help in emphasizing the following understandings: (1) Student sections can absolutely be fun without being disparaging (2) Our players and our opponents are legally children (3) Schools have an obligation to create a safe environment for children (4) Saying anything negative directly towards a specific player, coach, referee is NEVER acceptable

Guidance for students when they ask ‘what should I say?’ (1) Be positive about our team (there is plenty) (2) Be funny, without being crude (3) Be creative…. ‘Airball’ and ‘Warm up the bus’ are old and worn out (4) Anything they would be OK with other fans chanting at their younger sibling(s) if they were playing"

Friday, January 20 in the am. Tom Out: Principals Meeting at BOCES. Contact: T Roote.

Friday, February 3 from 1:00-2:00 pm in our auditorium. Merry Go Round Theatre. Contact: A Lannon

Friday, May 12 at NRW. Special Olympics. 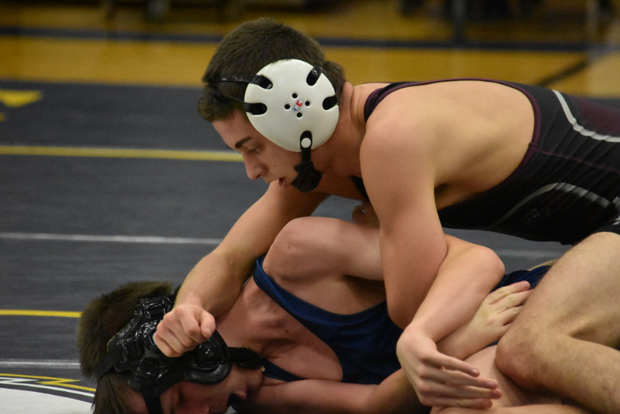