Orion is using Smore newsletters to spread the word online.

Get email updates from Orion:

John Cabot, in 1497- 96, and Giovanni da Verrazano, in 1524, may have sailed along the coast of Maine. In 1604 French colonist under Samuel de Champlain and the Sieur de Monts wintered at the mouth of the St. Croix River. In 1607 English settlers, led by George Popham and Raleigh Gilbert, were sent out of by the Plymouth, or North Virginia, Company. They established a community, Sagadahoc, at the mouth of the Kennebec River, but a year later returned to England.

Rhode Island was founded by Roger Williams in 1636, who had been banished from the Massachusetts colony for His advocacy of religious tolerance and the separation of church and state. During the colonial period, Newport was a major hub for shipping and trade, and in the 19th century Rhode Island was at the forefront of the Industrial Revolution and the establishment of power- driven textile mills.

New Hampshire was first named North Virginia, and it was once under the jurisdiction of Massachusetts. Early historians record that in 1623, under the authority of an English land-grant, Captain John Mason, in conjunction with several others, sent David Thomson, a Scotsman, and Edward and Thomas Hilton, fish-merchants of London, with a number of other people in two divisions to establish a fishing colony in what is now New Hampshire, at the mouth of the Piscataqua River. Nine years before that Captain John Smith of England and later of Virginia, sailing along the New England coast and inspired by the charm of our summer shores and the solitude of our countrysides, wrote back to his countrymen that:

"Here should be no landlords to rack us with high rents, or extorted fines to consume us. Here every man may be a master of his own labor and land in a short time. The sea there is the strangest pond I ever saw. What sport doth yield a more pleasant content and less hurt or charge than angling with a hook, and crossing the sweet air from isle to isle over the silent streams of a calm sea?"

When was the colony of Connecticut founded? The Connecticut Colony was founded in 1636 by Thomas Hooker and other colonists, at Hartford. Word taken from a Native Indian phrase meaning “river whose water is driven by tides or winds.” The first settlement by Europeans in Connecticut was made on the site of the present Hartford in 1633, by a party of Dutch from New Netherlands. In the same year a trading post was established on the Connecticut river, near Windsor, by members of the Plymouth Colony, and John Oldham (1600-1636) of Massachusetts explored the valley and his reports led to the founding of the colony by Thomas Hooker in 1636. Fast facts and interesting information about the founding, establishment, geography, climate, religion, history, natural resources, raw material, industries (refer to Colonial Times) and the famous historical people associated with the Connecticut Colony of Colonial America.

Massachusetts Bay Colony, one of the original English settlements in present-day Massachusetts, settled in 1630 by a group of about 1,000 Puritan refugees from England under Governor John Withrop. In 1629 the Massachusetts Bay Company had obtained from King Charles I a charter empowering the company to trade and colonize in New England between the Charles and Merrimack rivers. Omitted from the charter was the usual clause requiring the company to hold its business meetings in England, a circumstance that the Puritan stockholders used to transfer control of the colony to America. The Puritans established a theocratic government with the franchise limited to church members. Growing estrangement between the colony and England resulted in the annulment of the company’s charter in 1684 and the substitution of royal government under a new charter granted in 1691. The charter of 1691 merged the Plymouth colony and Maine into the Massachusetts Bay Colony.

Problems in the New England Colonies

It has long been understood that the prime motive for the founding of the New England colonies was religious freedom. Certainly what those early colonists wanted was the freedom to worship God as they deemed proper, but they did not extend that freedom to everyone. Those who expressed a different approach to religious worship were not welcome. Puritans especially were intolerant toward those who held views other than their own. Farming in the New England colonies was a challenge. Due to the cold, long, and harsh winters, the growing season was very short. The soil was also rocky, so farmers had to take all the rocks out of the ground before planting. Due to these shortcomings, the farmers in the New England colonies only farmed enough for their family, themselves, and their farm animals. Another problem was that the Natives wanted to get rid of the colonist because they were destroying the land. This lead to war and disagreement amongst the two groups.

Relations With the Natives

Native peoples like the Massachusetts tribes enthusiastically welcomed European settlers to their shores up to the third decade of the seventeenth century. Their motives were mixed. Many thought the armed Europeans would protect them from their more powerful native enemies. They also welcomed the trade with Europeans in skins and hides, receiving wampum in the form of shells and beads in exchange. Natives generously shared with the settlers their belongings, supplies, food, and the skills necessary for survival in the New World. What the settlers gave them in exchange was destined to destroy them: disease, firearms, whiskey, a brutal religion totally at odds with nature, and a demand for material goods that would rob them of their independence. Within ten years of the arrival of Winthrop and his party, the natives' welcome of the settlers had worn out. The settlers had appeared on the scene with two objectives in mind with regard to the Indians: secure their land and convert them to Christianity. The natives soon saw trade as the settlers' means of exploitation. Sachems began to resent missionaries as interlopers interested only in preparing the way for land grabs. The English made their own laws on what for centuries had been native soil and held natives accountable to English rules. Moreover, any breach of English law resulted in a native's being subjected to a public humiliation unknown in his or her own culture.

"He that will not work shall not eat."

This is a well known warning used by Captain John Smith to motivate the discouraged and disgruntled men who formed the English colony at Jamestown, Virginia, in 1607. Many had expected to find gold or other easy riches. Instead, they found that just surviving would be an enormous challenge.

2. "For we must consider that we shall be as a city upon a hill. The eyes of all people are upon us."

These are the best known lines from a sermon spoken by John Winthrop to his fellow Puritans on their way to Massachusetts in 1630. It expressed his belief that people throughout the world would be watching to see if the new settlement could live up to its ideals of Christian brotherhood. The sermon planted the belief, shared by many Americans even today, that America has an obligation to set an example for the world of a good and just society.

3. "Taxation without representation is tyranny."

These words are usually attributed to James Otis, a leader in the independence movement in Boston as trouble rose with England in the 1760s and 1770s. They spread far and wide in the colonies as calls for independence grew louder.

4. "The distinction between Virginians, Pennsylvanians, New Yorkers, and New Englanders, are no more. I am not a Virginian, but an American."

These words are from Patrick Henry's speech in 1774 at a meeting of the First Continental Congress in Philadelphia. They reveal that some colonists were beginning to feel a sense of unity they had never felt before. This shift of consciousness was crucial for the creation of the United States in 1776, since most colonists had always thought of themselves mainly in terms of their own colonies. 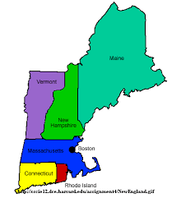 A seventeenth-century map of the New England colony.

The climate of New England was generally very similar to England or France, with only minor differences. It was a maritime climate and this climate helped promote growing crops because winter was shorter and growing season longer. The climate was not, however, well-suited to growing special tropical crops, like tobacco, indigo, or sugar, because it was note warm enough. The level of rain was less than England at the time but higher than the present-day Midwest. The climate in the New England colonies when the country was founded were just about the same as they are now. Moderate Summers 3-4 months long then cold and moist the rest of the year. Extreme cold further North and heavy snows. But the short Summer made for a very short growing season so the crops were mainly fast growing like squash, pumpkin, gords, etc. The long cold Winters made the early Spring a good time for harvesting Maple sap for one of the area biggest exports, Maple Syrup.

Surviving in The New England Colonies

Whaling was a very succesful way to make a living if you were able to work well together and catch whales often. If you did catch a whale, you could get a very profitable item: whale oil. Whale oil was used to make commodities such as soap and candles.

Building ships was also a good way to make money. The reason it was a good money maker for the New England colonies is because you needed ships if you were a sailor, fisherman, whaler, or a traveling merchant. These colonies also built ships for England themselves.

Fishing was a very good way of making money in the New England colonies. Due to the lack of good farming soil, fishermen were able to get enough fish to sell and make a living. This made life easier for everybody, because if there was no food, nobody would be able to live in the colonies.

Blacksmithing was also a great way to make money. Blacksmithing includes making silverware, locks, and just about anything with iron or metal in the 1700's. The items blacksmiths made often had to do with houses and items to improve your life at home.

There weren't always enough people for labor forces in the colonies, so many men had to work more than one job. Often, people would have to get together to build more houses, leaving the women and children to do the chores and cook. The natives had a big part in helping the colonist survive. If its wash;t for natives, the colonist wouldn't have survived.

Work in the Colony

Orion is using Smore newsletters to spread the word online.