As part of the Newburgh Illuminated festival on the weekend of June 21-23rd, The Historical Society of Newburgh and the Highlands is teaming up with The Alexander Hamilton Awareness Society (The AHA Society) for a special history event.

On Saturday, June 22nd, at 6 PM, two of George Washington's original cabinet members, "Alexander Hamilton" and "Thomas Jefferson" will meet on the lawn of Washington's Headquarters to square off in a public debate. This first part on the lawn will be family friendly and all are welcome.

After that, we invite the 21-and-up crowd to grab their tankards as we set out to continue the debate in local bars. Back in the 18th century, much of public debate took place in the local tavern. We're continuing that tradition with a pub crawl with Thomas Jefferson, Alexander Hamilton, and 18th century reenactors. Join us in period clothing if you have them! 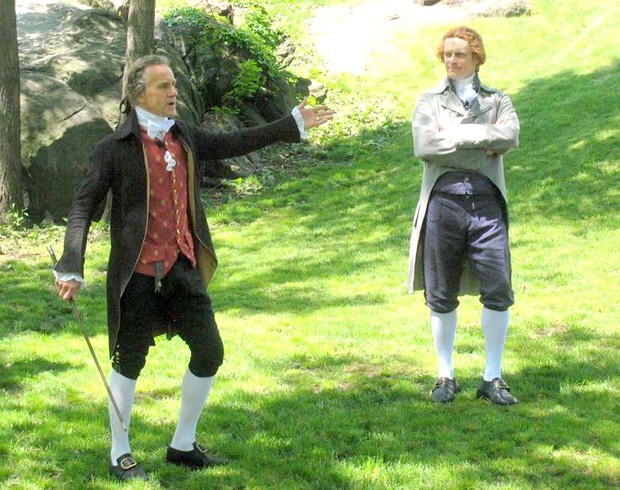 All locations are within short walking distance of each other.

(Note: Times are approximate to give time for attendees to move from one location to the next)

In the evening, you can break away after the debate on the lawn to attend the Early Chamber Music Ensemble's "Be Glad Then America" performance of 18th century music and dance.

Ritz Theater on Broadway at 7pm.

Alexander Hamilton and Thomas Jefferson debate each other on the lawn of Washington's Headquarters.

Meeting Location: Around the Minuteman statue on the grounds (in front of the Hasbrouck House).

Come try a "Newburgh Conspiracy" beer or another specialty from this local brewery.

Pop by this local restaurant/pub as another stop on our official pub crawl route.

Other recommended stops on your pub crawl route

Torches on the Hudson

@torches
A restaurant and bar on the picturesque Newburgh waterfront

Facebook @NewburghIllumin
Newburgh Illuminated is a city-wide weekend festival celebrating the city's history of innovation. In 1884, it became the second American city to be electrified when Edison built the first power plant in Newburgh and wired it up.

Join in on this festival of arts, heritage, and music in Newburgh. Learn more about Newburgh Illuminated and other planned events here.

The Historical Society of Newburgh Bay and the Highlands

Facebook @newbughhistory
The Historical Society of Newburgh Bay and the Highlands, headquartered in the 1830 Captain David Crawford House, is a private not-for-profit organization chartered by the State of New York. Incorporated in 1884, the Society was originally dedicated to the collection and preservation of records and data pertaining to the Hudson River Valley, focusing especially on its Revolutionary War history.

Serving as stewards of our history, the Society is dedicated to preserving, promoting and protecting the unique history, architecture and culture of Newburgh. Our unique story is told through the Society’s collections, programs and events such as the Hamilton vs. Jefferson debate and pub crawl.

Facebook @theahasociety
Founded in late 2011, The AHA Society strives to enrich the public's knowledge and understanding of Alexander Hamilton, an influential Founding Father that greatly shaped the United States that we live in today.

The AHA Society focuses on providing accurate and factual information about Alexander Hamilton and the Founding period of the United States in an interesting and engaging manner. We do so through a variety of initiatives, including presentations, events, exhibits, websites, videos, and social media outreach.

Keep up-to-date on our society at The-AHA-Society.com and learn more about Alexander Hamilton from AllThingsHamilton.com