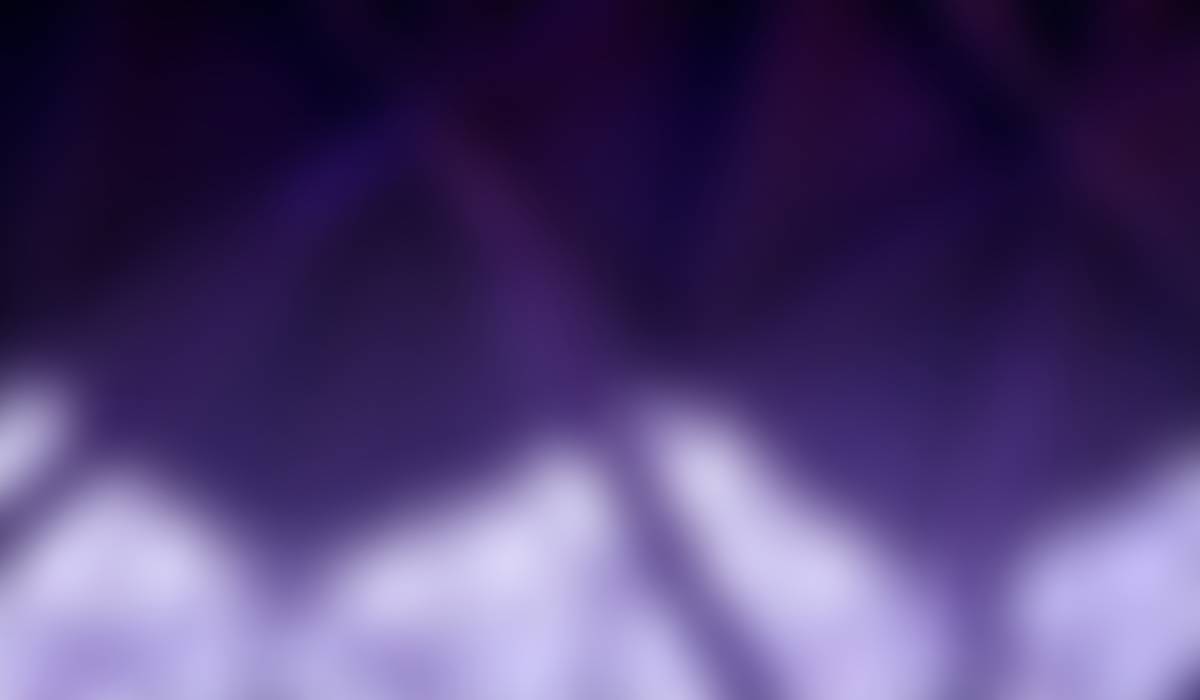 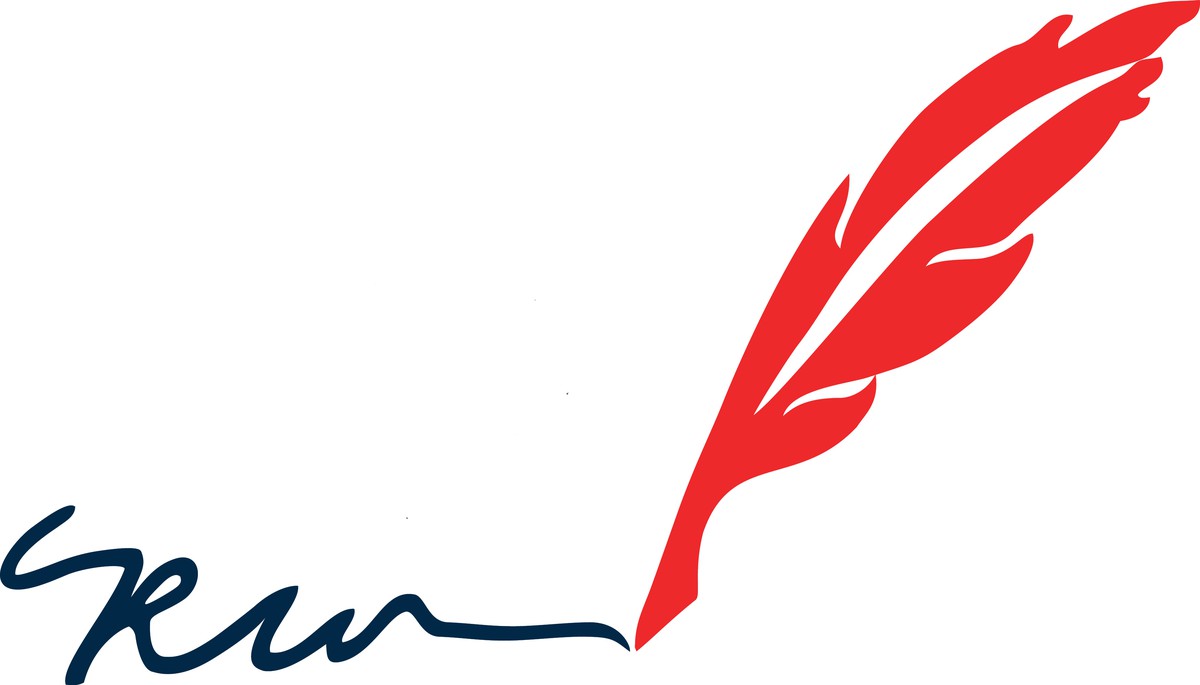 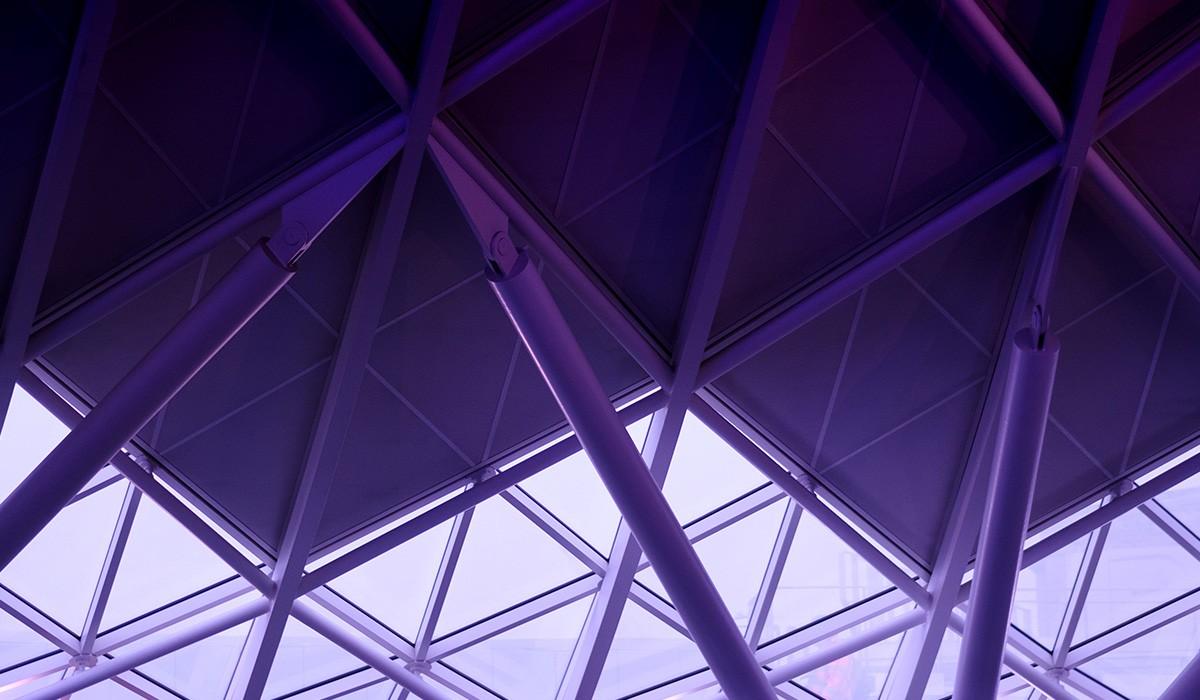 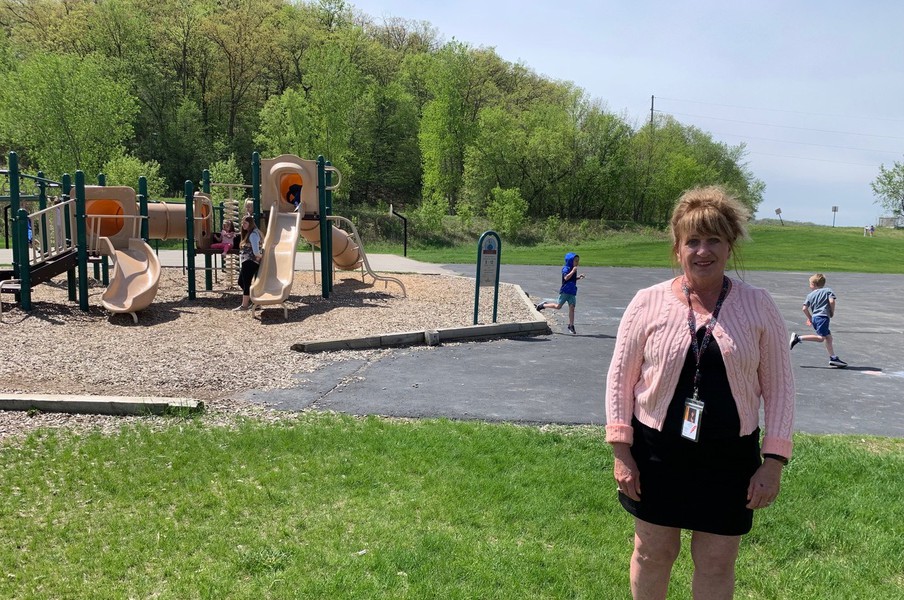 Lori Kenney's work with students extends from the playground to the classroom. She retires next month.

Flexibility is part of the para world

If you’re not sure what a paraprofessional does during a typical day, here is how Lori Kenney describes her job at Burnside Elementary School.

“I do reading and math interventions, greet the children at parent drop off, watch over four recesses every day, walk the children to Aspen Avenue at the end of the day, and anything else I can help my teachers with that I work for. Flexibility is the key.”

Lori is retiring after 30 years with Red Wing Public Schools.

What have you enjoyed the most about being a para?

Helping the students learn, whether it’s in kindergarten or up to sixth grade.

What do you hope the next chapter in life brings?

Relaxation and more time helping my husband with our total home remodel.

What will you miss most about Red Wing Public Schools?

The special relationships you build with students … and my coworkers. 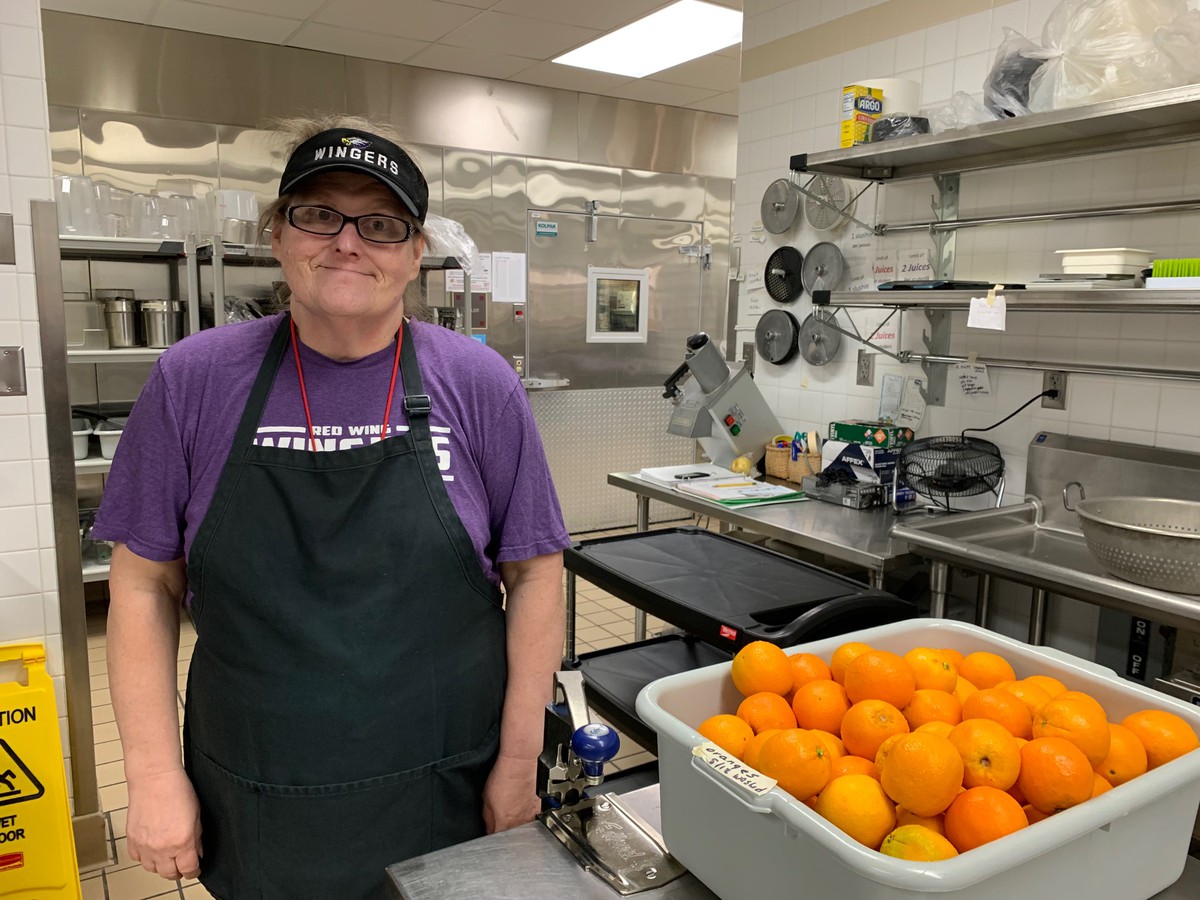 Rhonda Johnson will cook her final meal as a district employee on June 2.

Ready to put down the mixing bowl

“We baked all the breads, buns, desserts, cookies for all the conferences. Everything,” Rhonda recalls of the bakery, which closed shortly before the pandemic.

The year 2017 found her back at Red Wing Public Schools, but this time at Red Wing High School. She will retire June 3.

What is your favorite menu item?

Pizza. I like the pizza up here, which we haven’t had a lot of lately.

What might students going through the lunch line not know about you?

I’ve done several jobs at the schools. I’ve done substitute van driving, substitute custodial and I was part-time custodian at the Arena, cleaning in the mornings.

What will you miss most about Red Wing Public Schools?

The people. This is the best group of girls I’ve ever worked with – and I’ve worked with a lot of them.

What do you hope the next chapter in life brings?

I’m cleaning St. John’s School and the church. From there, I don’t know. You never know what comes. Maybe I’ll substitute back here again!

NOTE: The Spotlight continues to shine on teachers and staff who are retiring. Leave a message for any retiree or share a favorite story by clicking on the button above. 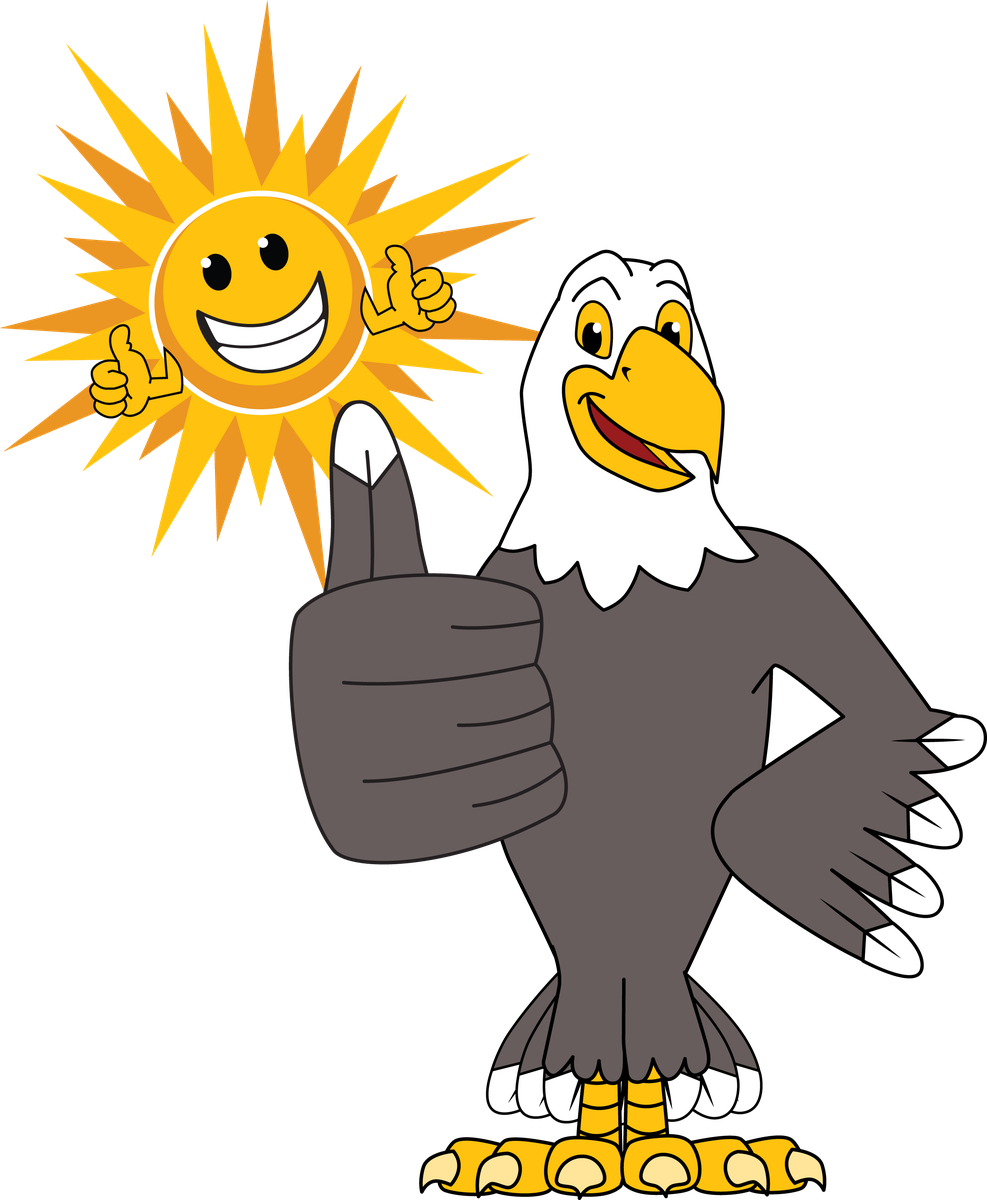 Burnside, Sunnyside and Twin Bluff students and staff have much to celebrate, and they will do so in a big way May 23-27 during Winger Pride Week.

Monday -- Winger Pride Day. Wear purple and white. We will take time to create thank-you notes for those who have helped us this year.

Tuesday -- Sports Day. Wear your gear for your favorite team or athlete. We will play games outdoors.

Wednesday -- Socks & Sunglasses Day. Wear your favorite socks and sunglasses. We will go on a scavenger hunt. 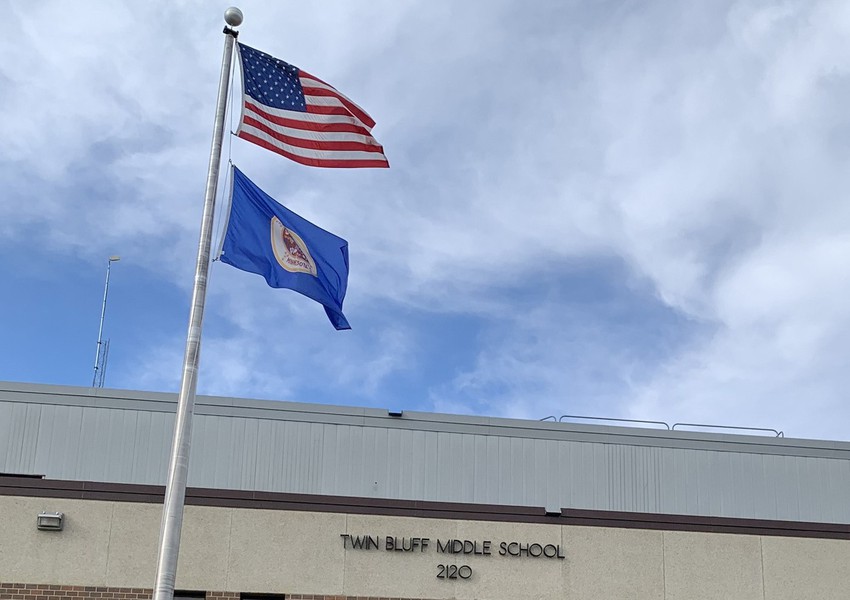 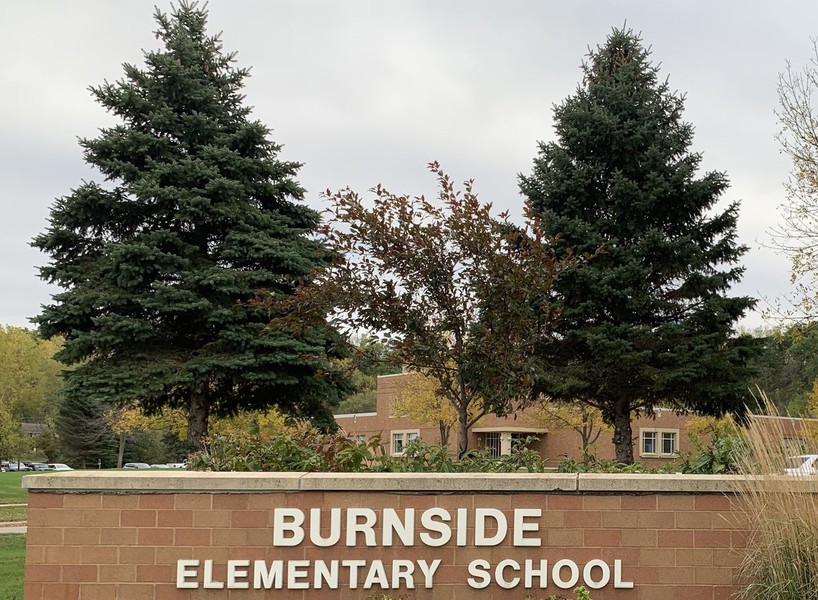 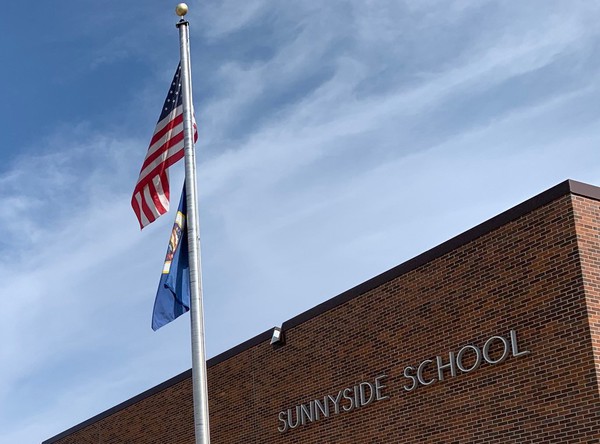 May 23-24: Activity/field days during physical education

Photo of the week 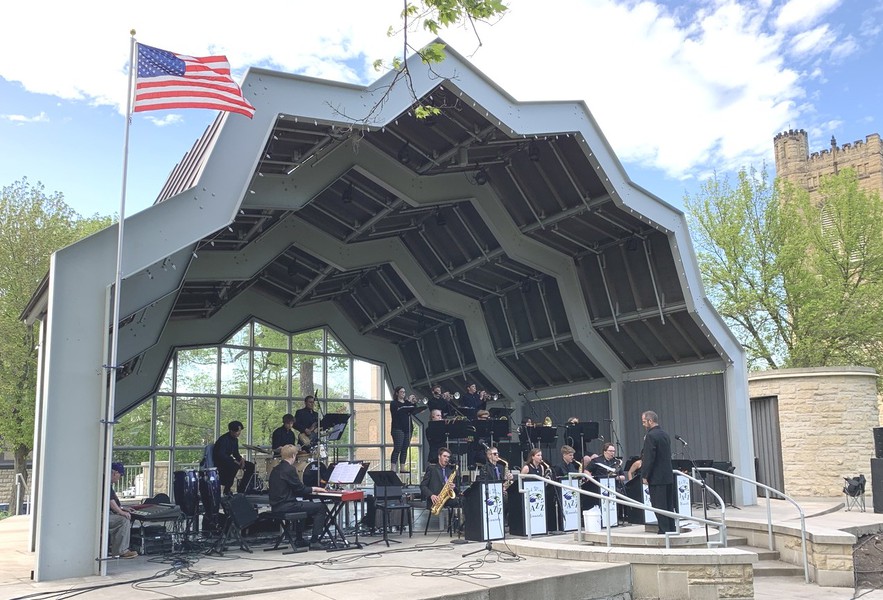 Big band, bop, Latin and all the jazz

Jazz Lab students perform under the direction of Tom Wentzler on May 18 in Central Park. Jazz Lab is a class. The annual free concert included the Jazz 2 and Jazz 3 bands as well as the Ovation choir; those ensembles practice before or after school. 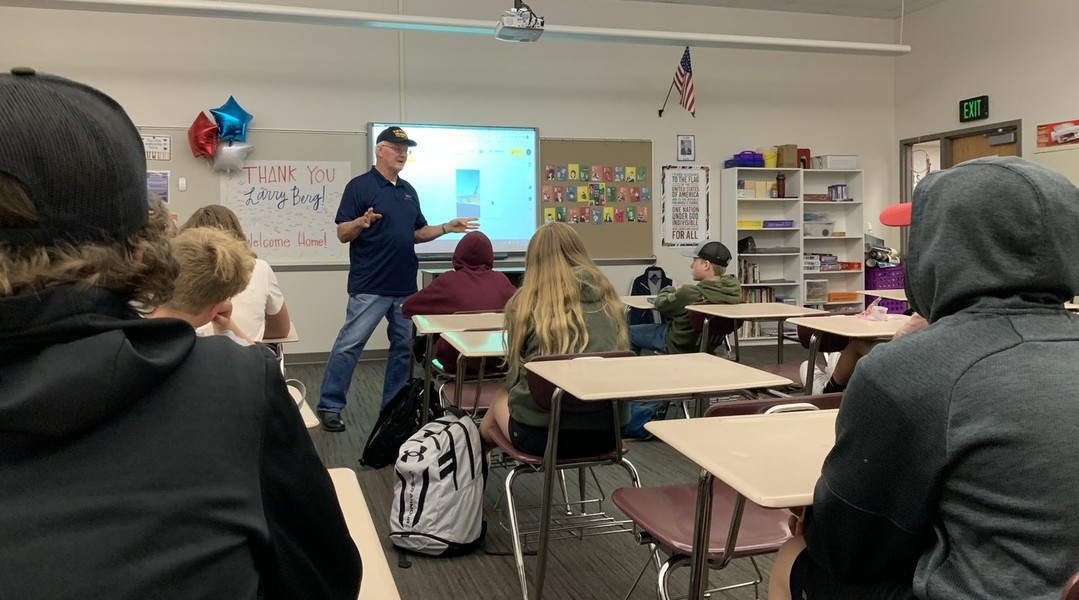 Larry Berg speaks with seventh graders in Mrs. Mann's classes about his during service the Vietnam War and about Honor Flight, a program that flies veterans for free to Washington, D.C.

Lessons in U.S. history get personal 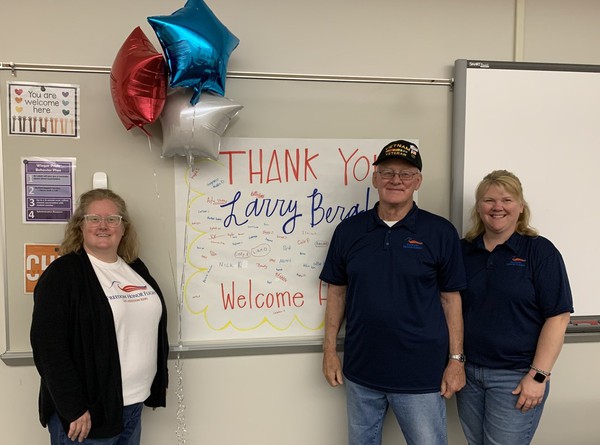 Mrs. Kim Mann's social studies students are learning about the nation's wars and conflicts. As part of their lessons, they wrote letters thanking those who served.

Those letters reached the hands of World War II, Korea and Vietnam vets on May 7 during an Honor Flight home from an long, emotional day Washington, D.C.

That "mail call" met so much, Vietnam vet Larry Berg told students during classroom visits on May 22.

"When we returned from Vietnam, there was no one there to honor or thank us," he said. "I wasn't spit on. Some of us were."

Honor Flight is a national network of hubs dedicated to honor our nation’s veterans with an all-expenses paid trip to the memorials in Washington, D.C. Participants share their experiences while remembering friends and comrades lost.

Berg, 74, flew with the La Crosse, Wis., hub with daughter Betsy Manning, who teaches in Red Wing Public Schools. She served as a his Honor Flight guardian, a person who supports the veterans from 5 in the morning to 10 at night.

They shared photos from their day and he also spoke about being drafted while a young farmer in Pine Island. His skills resulted in being assigned to operate the generator that powered basecamp in Vietnam. For every person in the infantry, he explained, another 10 other provide everything that keeps operations going. He had a job and did it.

Students were silent at first, but Berg had questions for them: Has anyone in your family served in the military? Do they ever talk about it? What do you think about ... ?

As they filed out in unusual silence to their next class , several students stopped to shake Berg's hand.

"Thank you for your service, sir." 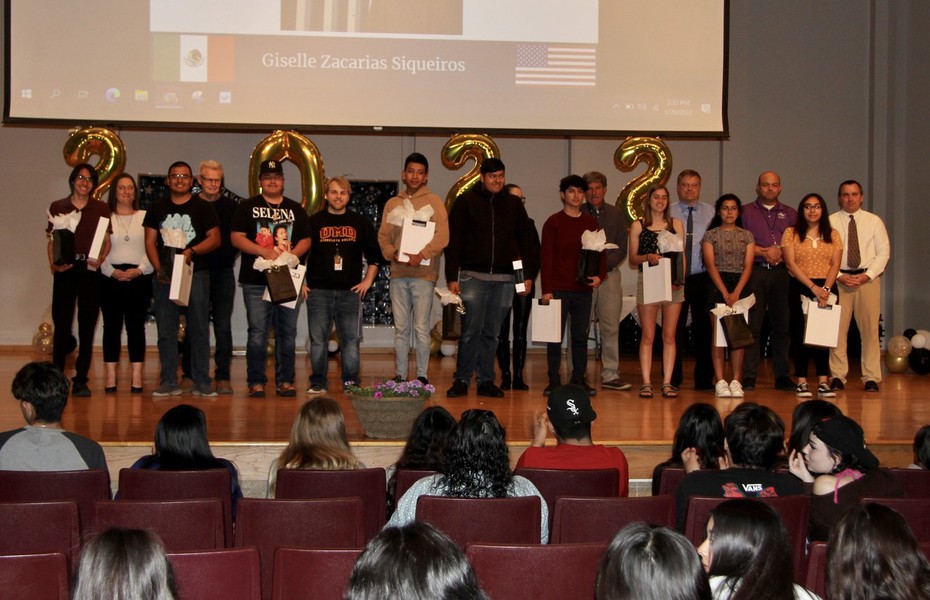 Ready for the next step in life 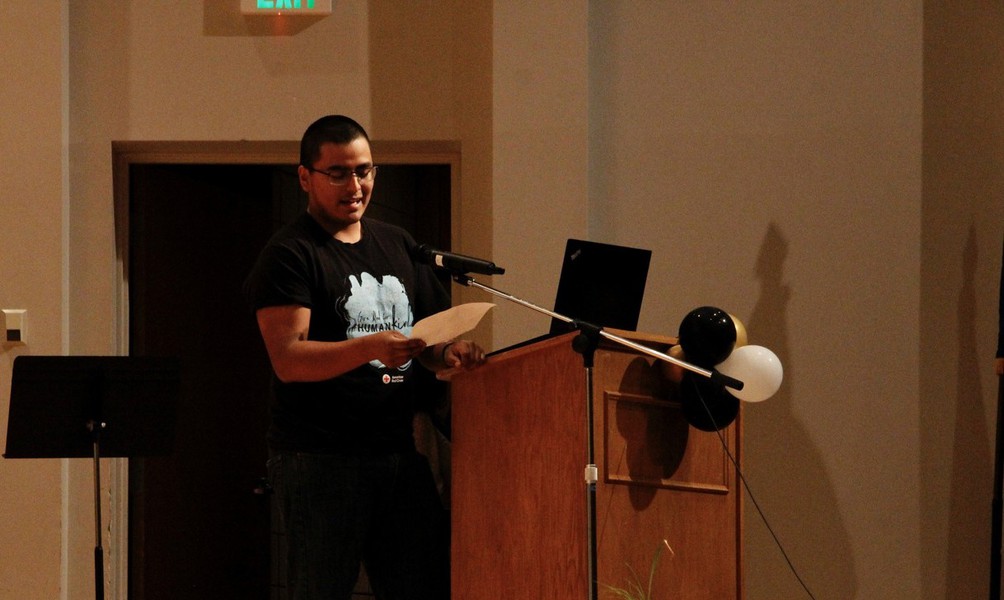 Red Wing High School celebrated the class of 2022's Hispanic members on Friday, May 20. At one point, teachers, administrators and tutors took the stage with the students.

The bilingual event included recognition, music, speeches and refreshments. Speaking on behalf of his fellow students, Luis Catarino Santiago talked about what they've learned and about their hopes for a bright future made possible through Red Wing Public Schools. For him, the music program has been especially rewarding, he said.

THIS WEEK AND NEXT AT RWHS

Thursday, May 26: Winger Study after school

Bid here: Goodbye to the ties!

The Goodbye to the Ties online auction raised more than $650 from the 20 ties sold to date. More of retiring teacher Scott Bender's ties will be sold each school day through June 2, the last day of school. Click the link above. All proceeds will be split equally between two new scholarships at RWHS in memory of Sammy Kriese and Jana Langhans. 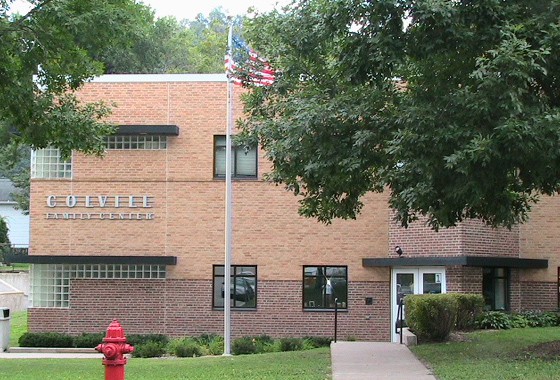 Colvill Family Center has year-end celebrations planned for next week in the gym. Short programs will include songs, a video slideshow and diploma presentation. Please understand that there is limited space in our gym. 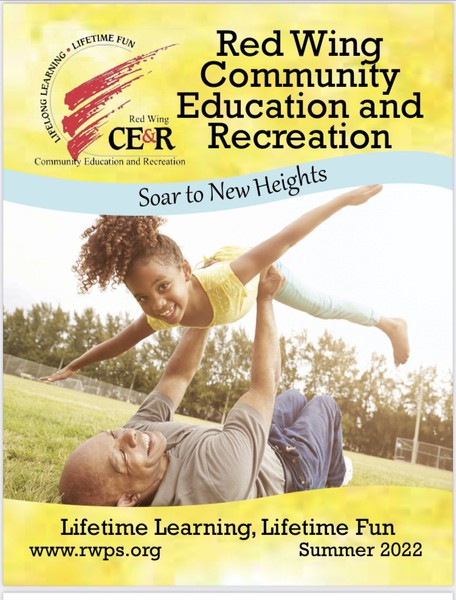 Driver's education isn't only for the young 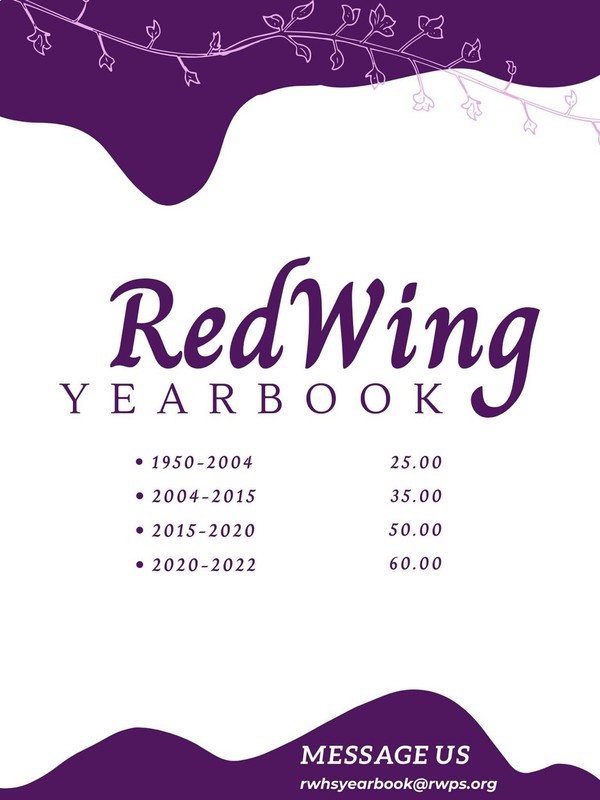 Surplus yearbooks from the past for sale

Please email rwhsyearbook@rwps.org to see if the year/s you want are still available! 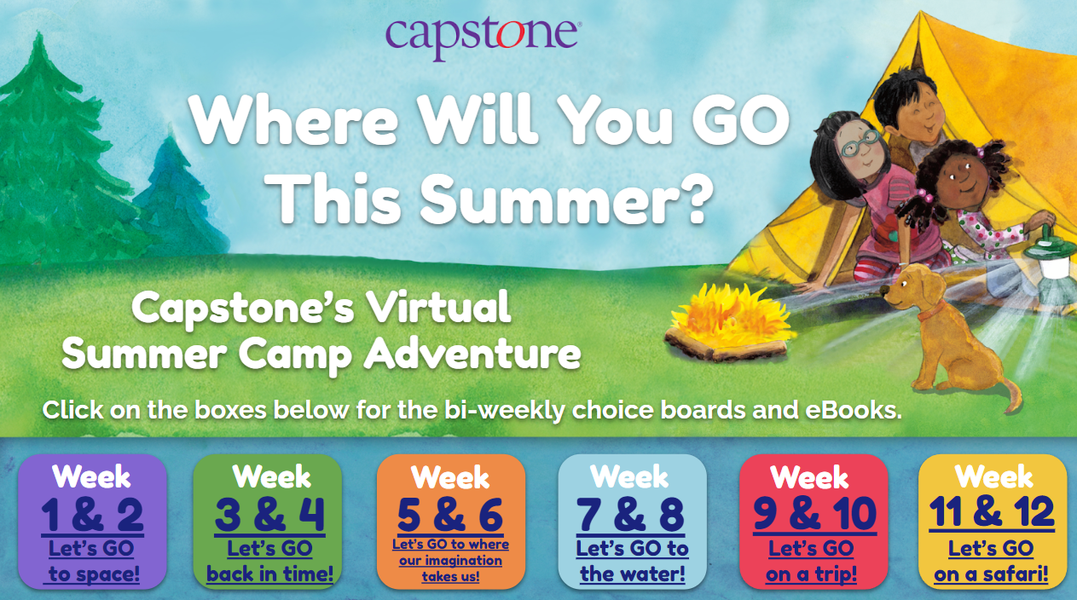 A camp virtually and literally at kids' fingertips

Red Wing Public Schools is offering virtual camp on its Elementary IMC webpage. This will be free through Capstone in collaboration with Buncee and Library Voice.

In addition to the virtual camp, students will continue to have access during the summer to the MackinVia ebooks and Tumblebooks as well as other online resources. 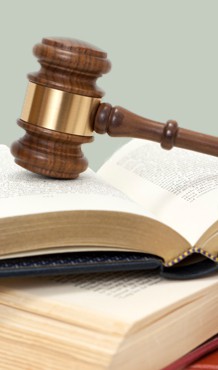 Red Wing Police Department will continue to provide a school resource officer during the academic year. The city and school district renewed a three-year contract, providing onsite presence until June 30, 2025.

The SRO is principally housed at the high school with time at Twin Bluff Middle School on a weekly basis.

Board members approved the contract on Monday, May 16, and praised the success of this agreement.

The board will meet at 6 p.m. May 31 in its first step to find a successor to Superintendent Karsten Anderson.

St. Francis Area Schools offered him its superintendent post on Monday and began contract negotiations. That district's board is expected to approve the contract on June. 6.

The board also finalized a land sale at 316 Goodhue St. Goodhue County Habitat for Humanity will pay $25,000. 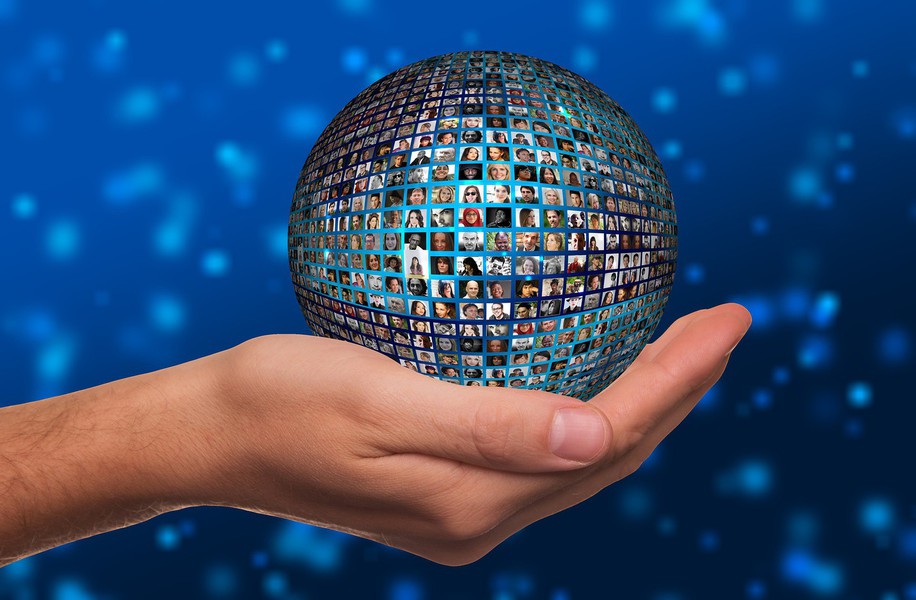 Community support means the world to us!

For May, the board accepted the following donations toward programs that benefit our students.

ON THE DISTRICT CALENDAR

Tuesday, May 31: Special School Board meeting to discuss hiring a new superintendent. 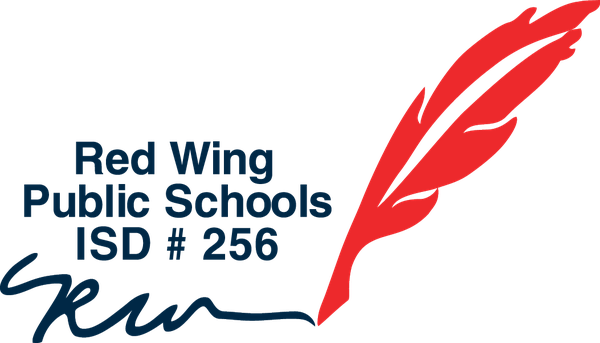 Red Wing Public Schools strives to provide an innovating and meaningful educational experience that fosters curiosity; pursues and applies best practices; embraces diversity by respectfully engaging all students, families, and staff; and connects and partners with our community. We serve pre-K through grade 12.