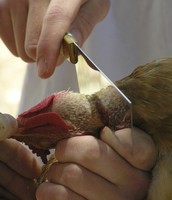 As soon as the chicks are born, the males and females are divided. The males get killed almost instantly, and the females are sentenced to a life of pain and suffering. Male chickens are thrown into trash bags to suffocate or get grind alive. The female chicken that is a few days old gets their beaks cut off by a hot blade with no pain killers used. After this, chickens are in so much pain that they can't eat. They then die from dehydration and weakened immune system.

Those that survive are put into an 18-20 inch wired cage, that holds about 10 hens. The average wingspan of a chicken is about 30 inches. Chickens are so close together that they pee, poop, and if they want to move, walk on each other. Chickens that die in these cages are left to rot. After the chickens are "useless" they are sent to slaughterhouses where their frail legs are shackled up and they get their throats slit.

Pigs are very intelligent animals that are smarter than dogs, and three-year old children. In the U.S. there are 65 million pigs suffering in factories. Mother pigs are forced to sit in cages that are 7 feet long and only 2 feet wide. This allows no room for the pig to move. Right after a mother pig gives birth, the pig gets impregnated over and over again.

Pigs go through a lot of stress and pain. Male pigs are castrated without pain killers, farmers cut off chunks of their ear for identification purposes, and pigs that are stressed out start to bite tails and turn to cannibalism. A "solution" to this is chopping off the pigs tails, and breaking off the ends of their teeth with pliers. Young pigs that show no promise have their heads smashed into the ground until they die. When workers want the pigs to move, they are kicked and beat.

There are 29 million cows in the US that are used for their meat. When they are young, they are branded, have their horns burned off, and males testicles are ripped out without painkillers. Cows are artificially impregnated, and then have their child taken away from them. Cows form a strong bond with their child, like a lot of species, and they will cry out for days after their child has been taken away from them. Cows are very smart and social, and all their basic rights are being stripped from them.

Cows are sometimes transported in extreme weathers to the slaughterhouses without food or water. When a cow is going to be slaughtered they die in horrible ways while experiencing major pain. Their throats are slit, they are hung up by their legs, and skinned. Some cows are still alive through this entire process.

How they slaughter cows, chickens, pigs in some farms in America

How to Follow a Healthy Vegetarian Diet | Superfoods Guide