Get email updates from Eduardo: 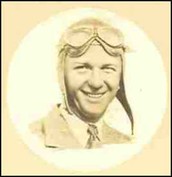 Clarence Duncan Chamberlin was born on November 11, 1893, in the small town of Denison, Iowa. He owned a very successful Harley-Davison dealership in town. He served as an aviation pilot during world war 1 and was 2nd lieutenant. He was the second person to fly across the Atlantic Ocean nonstop. He died on October 30, 1976 in Derby Connecticut.

After completing his education in the Denison public schools system, he enrolled at the Denison Normal and Business college. After graduating, he ended up , he was offered a job by Charles W. Taylor to serve as a chauffer on a six month trip through the southwest and to San Francisco for the worlds fair.

It was during these six months that he would discover two of his lifetime loves. He met Wilda Bogert who would later become his wife; he also discovered a passion for flying.

On Thanksgiving day of 1917, he decided to finally pursue his dream of flying. He enlisted with the Army Signal Corps as an aviator, but was told that aviation was too crowded. They encouraged him to be a military balloonist, but declined the offer. A few months later he received orders to report to the School of Military Aeronautics in Illinois. There his flying abilities progressed rapidly, and was given a commission as 2nd lieutenant. Soon after his promotion he became an instructor himself until a few months after when he received orders to go to New Jersey and await his deployment over seas.

Clarence went on to continue his aviation career, and also set many records. He was also the second person to complete a non-stop transatlantic flight, and was the first to do it with a passenger. He might as well have been the first if it wasn't for a legal injunction against the owner of his plane which delayed his departure.

Clarence married Wilda Bogert but then divorced in 1936. Later that year he married Louise Ashby, a young teacher he had met during a barnstorming trip up to Maine. He adopted her son Philip and later the family welcomed two new additions with the births of their two daughters Clarisse and Kathy.

" I don't want to float, I want to fly".- the year 1917 when he was encouraged to peruse a career as a military balloonist instead of an aviator.

I think that he is a risk taker because he dropped out of college to pursue his dreams.

Iowa flag- This represents his birthplace.

Toy car- He owned a dealership.

Toy plane-He was an aviation pioneer.