Every year, students have the opportunity to participate in the National Geography Bee. Central Middle School’s school-wide geography bee was held on Friday, January 10th. The week before, class bees took place in the individual social studies classes of all grades. Each student participated in seven rounds of geographic questions to test their current knowledge. After the seven rounds, a winner from each class was decided. The winners of the eighth grade classes were Alex Kotar, Anna Ortiz, Reagan Salvo, Katerina Sicard, and Julia Zurawski. In addition, the seventh grade class winners were Xavier Abeijon, Anton Levonian, Nick Mendes, Olivia Risler, and Alexandra Walec. Lastly, the sixth grade class winners were Jake Cooke, Caio Duarte, Kirill Ladner, and Emily Wood. These winners competed in more rounds of the Geography Bee in front of their peers. Eventually, the bee was narrowed down to two students: Anton Levonian and Julia Zurawski. Julia finished the bee in first, and Anton placed second. Julia then took the online test to see if she qualifies for New Jersey's state geography bee, which will be held in late March. The results will come in soon, so good luck Julia! Also, good job to all of the bee’s contestants! Below is a photo of Anton and Julia. 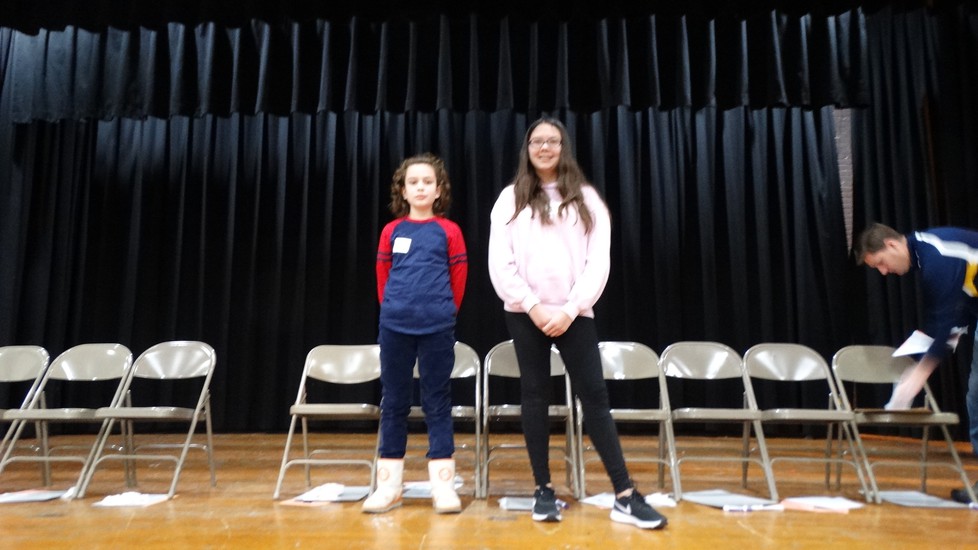 On January 29th, 2020, eight Central Middle School students visited Newark Academy to compete in the General Knowledge Competition. Six other schools participated in the competition, including Frelinghuysen and Morristown Beard. Central's Varsity teams consisted of Aadya Bharadwaj, Sophia Ehlert, Durga Shylesh, and Sofia Squizziato. Central's Junior Varsity teams consisted of Armaan Lerner, Anton Levonian, Lucas Miller, and David Youssef. For both teams, the first round was a learning experience. The second round went better. By the third round, both had gained more points and needed to do well in order to make it to the final round. Fortunately, both teams got to the final round. According to Mr. Gillespie, who chaperoned the trip, that is rare. The final rounds were competitive and a bit stressful but fun. The questions became more difficult, but they were able to handle it. By one of the JV members watching a movie, they were able to get a question right. The most nail-biting part was the end of it all. The judges were tallying up the points and then announced the winners. Central Middle School’s Varsity team earned 3rd place overall, and the JV team placed 2nd overall! All of the students had a lot of fun and enjoyed the competition. Below are two photos of Central's General Knowledge Team. 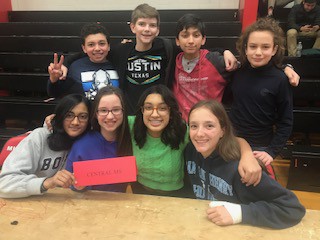 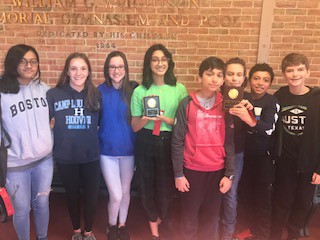 On Friday, January 24th, I had a chance to sit down with our guidance counselor, Mrs. Rominuk, During our meeting, I had the chance to ask a few questions about the Choose Love program in our school. Below is our interview in its entirety:

Q: When and how did the Choose Love program originate?

A: The Choose Love program was adopted by Long Hill in September of 2018.

Q: What is the purpose of the Choose Love program?

A: The purpose is to promote resilience, courage, gratitude, forgiveness, compassion, and empathy for the students. It also teaches students important life skills.

Q: How often do we have these Choose Love morning meetings?

A: We have these meetings once a month. Sometimes they are twice a month depending on the school schedule and activities.

Q: How do you feel students perceive the morning meetings, and what do you want students to take away from it?

A: What students take away from it and how they perceive it is up to them. Each student probably takes away something different from each lesson. The topics vary in regard to social and emotional well-being, and students have the opportunity to add to the classroom discussion based on their own thoughts, emotions, and experiences.

As most might already know, there have been major wild-fires in Australia. To help this problem, Central Middle School’s student council has collaborated with the Environmental Club to put together a fundraiser to raise money to help save animals in danger of losing their homes to the fires. The fundraiser ran until January 30th. The student council promoted this fundraising during lunches A and B using a paper thermometer, made by the Environmental Club. The goal was to fill up the thermometer with stickers, which people received each time they donated. So far, donations collected totaled $221.19. They will be donated to South Australian Veterinarian Emergency Management (SAVEM). This fundraiser was for a good cause, and everyone's help was greatly appreciated.

By By Kevin Feinstein

On Thursday, December 19, 2019, we had the school year’s first pep rally. For those who were not present, the pep rally occurred near the end of the school day and consisted of two major parts. The first part was a singing of the national anthem, and then the Student Council recognized all of the fall and winter sports teams, as well as the robotics team and the various consortium teams that met thus far. Afterwards, came an exciting basketball free-throw tournament of sorts. Thomas Osmond, our school president even declared it his favorite part of the pep rally, “... it is interesting to watch... there is competition between the grade levels and you really want your representative to make it...”, President Osmond describes the excitement of watching your friends and class representative in the free-throw competition. First, volunteers from each grade-level competed against one another for the highest score. When each preliminary round was over, the final contestants attempted to make as many of their allotted free throws as possible. Whoever made the most shots won. This exciting event was also a chance for students to cheer on their friends in the basketball competition, recognize the current teams from our school, and enjoy themselves and their friends. When asked the question, “Do you think the pep rally is helpful to our school community?’ he said, “Yes, it raises the morale of students and it lets the different teams get recognized, which I think motivates them… it’s also a break from regular school activity, and that’s always nice.” I, for one, cannot disagree with him. The pep rally was a great way to bring us all together as a community, and provides a much appreciated variety to our school experience. Luckily, if you missed the previous pep rally, or are wishing for another, there will be a similar event in the spring.

A terrible mistake has been made by Wikipedia and other websites of its type against the people of Long Hill and the entire state of New Jersey. They have referred to our very own Lord Stirling as “of New York.” Lord Stirling, or William Alexander, was a revolutionary war hero responsible for many military victories. As a Major General, and the third or fourth highest ranked man in the Continental Army, Lord Stirling led a large number of soldiers from many different colonies. He held back British troops at Long Island with the First Maryland Regiment when Washington and his army retreated. He also commanded numerous successful battles, such as the Battle of Monmouth and the Battle of Germantown. He even commanded troops at the Battle of Trenton, alongside Washington himself. Lord Stirling also saved Washington’s Army from total destruction at the disastrous Battle of Brandywine Creek.

Wikipedia claims Lord Stirling to be “of New York”, and although he was born in the state, he was a man of New Jersey. He was the greatest hero of Long Hill Township and could be considered the second greatest Revolutionary War hero of America. It is enough that New York stole his body for burial in New York, and we should not stand idly by while our neighbor to the north and its ally, Wikipedia, steal New Jersey’s heroes!

On Wednesday, February 19th, Central competed in the NJ School Consortium Volleyball Tournament against eight other schools at the Morris Plains Boro School. Central Physical Education teacher, Mrs. Felix, held try-outs and chaperoned the students on the trip. The Central players were Matthew Bennett, Gavin Eggers, Jacob Fullman, Riley Fullman, Alexis Perez, and Alexandra Walec. The students had a chance to play multiple, competitive games of volleyball, and they enjoyed the trip. Below is a photo of Central's volleyball team. 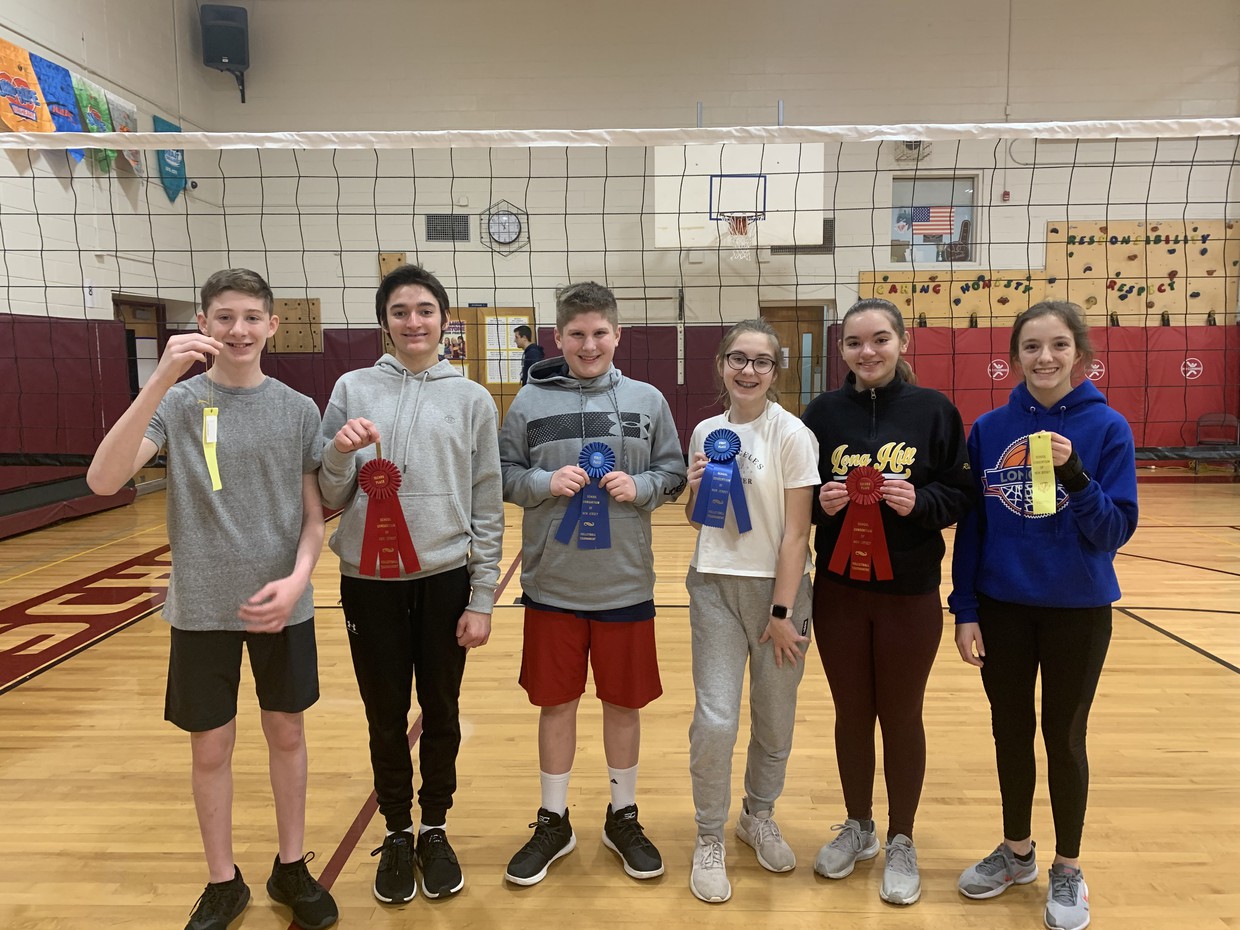 As the third marking period begins, there are two special holidays we think of in February - Valentine’s Day and Presidents’ Day. Valentine's Day is when we show our love towards other people… and candy! This day is a universally celebrated holiday, but Presidents’ Day is only celebrated in the United States because it is about our presidents.

A way that we celebrated Valentine's day at Central Middle School was a fundraiser for the musical production of Footloose. The fundraiser was selling roses and carnations. Ms. Eckert and Ms. Varner were selling them Monday, the 10th, through Friday, the 14th during the lunch periods. We also had a half day of school on Valentine’s Day, and we had Monday the 17th (Presidents' Day) off. Presidents' Day is very important to honor all of our presidents.