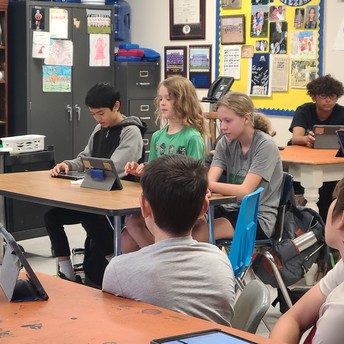 In Coach Janson's Debate class, the students have begun learning the format and rules for standard debates by presenting small arguments. 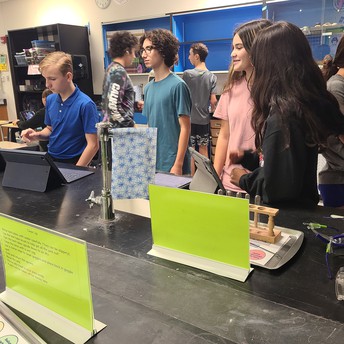 Getting Ready For A Lab 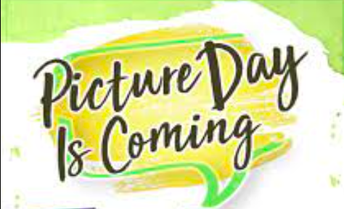 Order forms were sent home on Friday, but in the off chance your student lost it somewhere between school and home, you can order online at https://www.phototexasphotography.com/orderingschoolpictures

We are about 40% to our final goal, and the fundraiser will close in TWO weeks. Thank you to everyone who has donated so far!

Fundraising is something that helps to fund student activities and give teachers additional resources to support students. Through our partnership with School Funding Group we are simply asking for a minimum $20 dollar donation, and for that donation, you will receive numerous discounts on brand names like Amazon, Home Depot, Nike and Oakley. These discounts can far outweigh the cost of your donation.

The proceeds of this fundraiser will help fund:

Here is the link to donate, and I truly appreciate your generosity!

Did you sign up for the Lago Vista ISD Optional Accidental Damage & Theft Coverage for your student's device? Don't forget to pay for the coverage by October 1st! The cost is $50 for an individual student, $75 for households with multiple students.

Please visit https://www.myschoolbucks.com to pay for your student's coverage prior to October 1st.

If you have any questions, please contact our Technology Department at techhelp@lagovistaisd.net.

Parents - please check the emergency contacts you listed in the Parent Portal for your students. Please add all contacts: Dads, Moms, siblings, relatives, or friends that you would like to be able to pick up your child for an appointment or emergency.

If a person is not listed, we are unable to let them take a student from our campus.

If you have any questions or need help with that, please let me know.

Remember that all ticket sales are online for Volleyball and Football. Here's the link to buy tickets - https://www.lagovistaisd.net/page/dis.tickets

Also, please talk to your students about what they are allowed (and not allowed) to do while staying late for a game. We will supervise students at the game, but many times students will leave campus to run over to Sonic. Crossing 1431 is extremely dangerous, but it's not a decision that we can control.

So if you're student stays late to watch a game, have those conversations beforehand!

Also, pep rallies are back! Parents are allowed to come to the pep rallies, but please allow yourself extra time to check in through the front office.

If you have any questions, please let me know.

Next Week is Spirit Week

Here are the theme days:

Also, there are NO homecoming mums allowed during Spirit Week. Two reasons - I think this is a great high school tradition and gives the students something to look forward to, and second, have you seen some of those mums? Very distracting for middle school students!

A few things to put on your calendar coming up:

News from the LV Booster Club

Did you know that the LV Viking Booster Club provides funds to every sport in the district? Throughout the year, football concessions represents our biggest fundraiser and the funds that are raised are used to provide athletic equipment for all sports. So we truly represent one club fundraising for all district sports. We are so happy to have the ability to support so many, but we need your help in order to continue funding these programs successfully. We need volunteers from every sport to sign up for concessions and other support functions by clicking on the links provided below. As a side note, we are now able to accept all credit cards and Apple Pay in concessions with our newly installed and easy to use point of sale system. We are excited and focused on creating a culture of volunteerism district wide and we can only be successful together!”

Please see the concession links for all football teams --

If you received an email about accelerated instruction, the last day to respond to the form is September 10th.

The 7A Lady Vikings won in two straight games against Marble Falls on Wednesday evening. Lago Vista came out strong against Taylor with only giving up 10 points in the first set and then only 3 in the second. We had some strong consistent serving that was very difficult for Marble Falls to return. The support with the crowd really set the atmosphere as well! The crowd was so loud at times that we were penalized for serving twice because we couldn't hear the whistle! We appreciate everyone that came out to support these girls as it made all the difference in the world! Leading in serves was Ada Weyant and Kyrksen Cook. We had some great passing and assists from Myah and Brooklyn Marquez, Elah Francisco, and Emerson Burke. Overall, all of the girls did awesome and had great attitudes! They all fought hard and I can see so much improvement with court awareness in just one week! Also contributing to the team were Jolie Mosser, Eloise Thering, Ellie St. Martin, and Ava Bailey. Come back and support us on Monday!

The 7B Lady Vikings also won in two straight games against Marble Falls on Wednesday evening. It was a close start with the first set win at 25-19. Harper Phillips and Mitzi Wright started out strong with serving to help in the first set. The second set win was 25-15. Kylie Gerace and Odalys Guajardo had great consistent serving in this set! Leading in passing was Rileigh Ramirez. They all definitely progressed during the game. They improved with transitioning and had some great 3 touch points with a pass, set, and a hit, which is the ultimate goal. We had a great LV crowd for this group also and it definitely motivated them and pushed them! They should be hyped after this game and ready to compete! Also contributing to the team was Savanna Johnston, Camilla Cruz, Sierra Gonzalez, Emma Blair, Braxton Brewer, Selah Moore, and Aleeza Sahibzada.

The 8B Lady Vikings defeated the Mustangs of Marble Falls in 2 sets 25-19; 25-19 this past Wednesday. Serving was the theme of the night as Winter Callahan, Emily Viruette, & Audrey Ferguson were all able to push 6+ points on their serves. After a bit of a slow start the Lady Vikings picked up their defensive play with big contributions from Ke’Auvia Cox, Sabryna Holcomb, Winter Callahan and Anna Heston. The match was never in doubt as the girls hustled, bumped, set, served and spiked their way to victory. The Ladies are 2-0 on the season.

The 8A Lady Vikings also defeated Marble Falls this past Wednesday 25-17; 25-20 to move their season record to 2-0. The Ladies battled through some inconsistent play throughout the match to eventually overwhelm the Lady Mustangs late in each set with strong defensive and offensive play. Leading servers from the match: Eliana Helton, Olivia Parra, Claire Everett. Offensive Standouts: Eliana Helton, Sydney Mosser, Olivia Parra, Abby Tristan & Ayva Riter. Defensive Standouts: Claire Everett, Eliana Helton, Molly Roberts, & Sydney Mosser. The Lady Vikings will host the Lady Badgers of Lampasas on Monday 9/12. Come on out and support the girls! 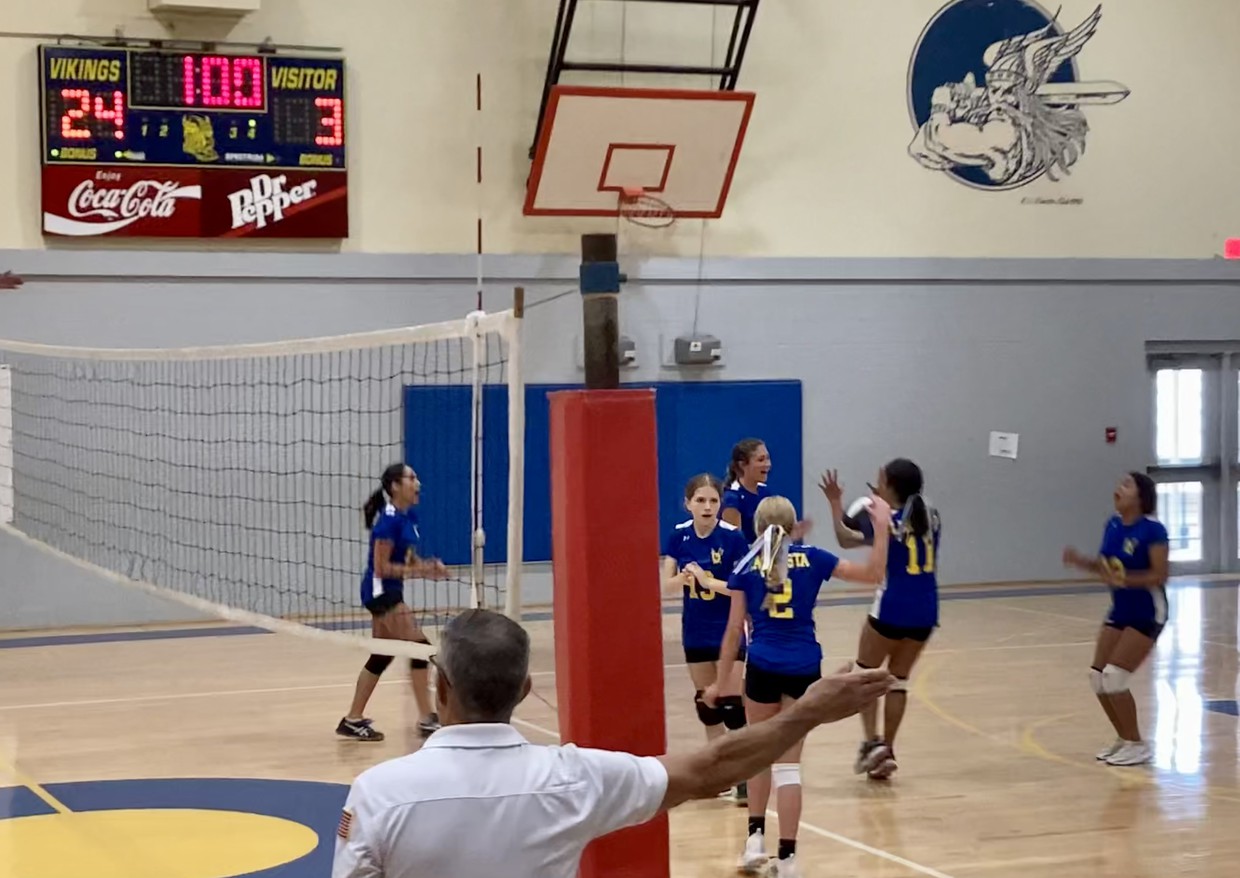 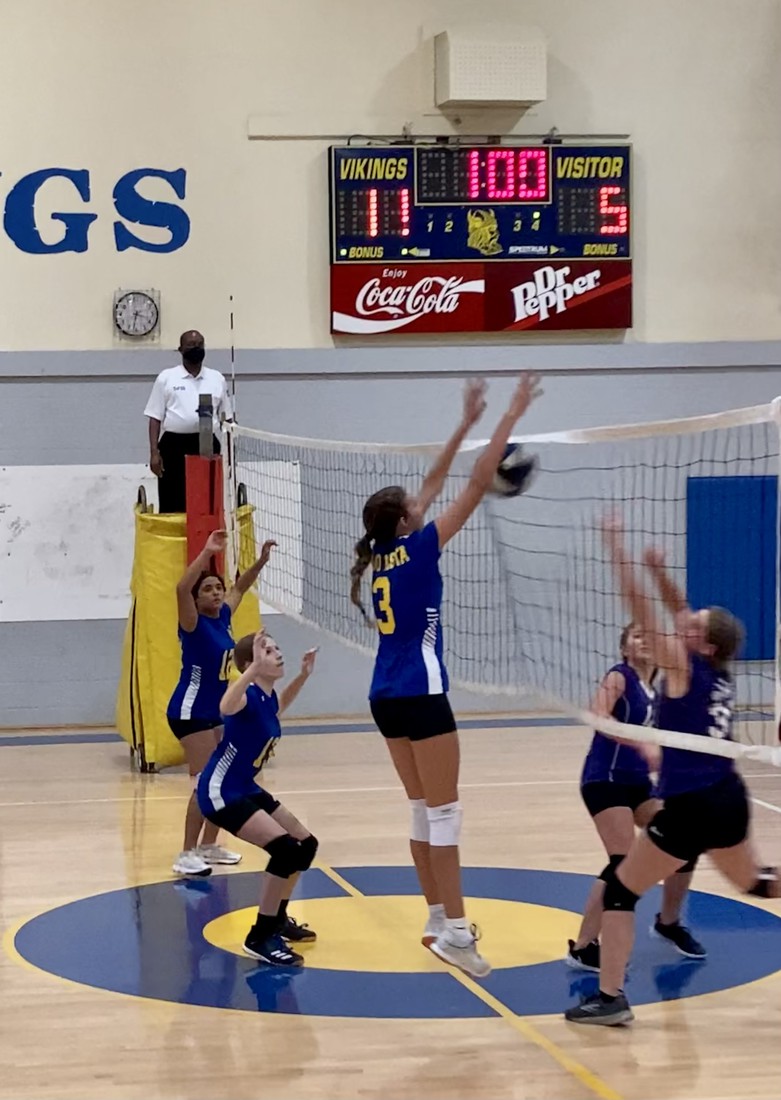 Also running for the MASSIVE girl's team were:

The top finishers for the boys were: 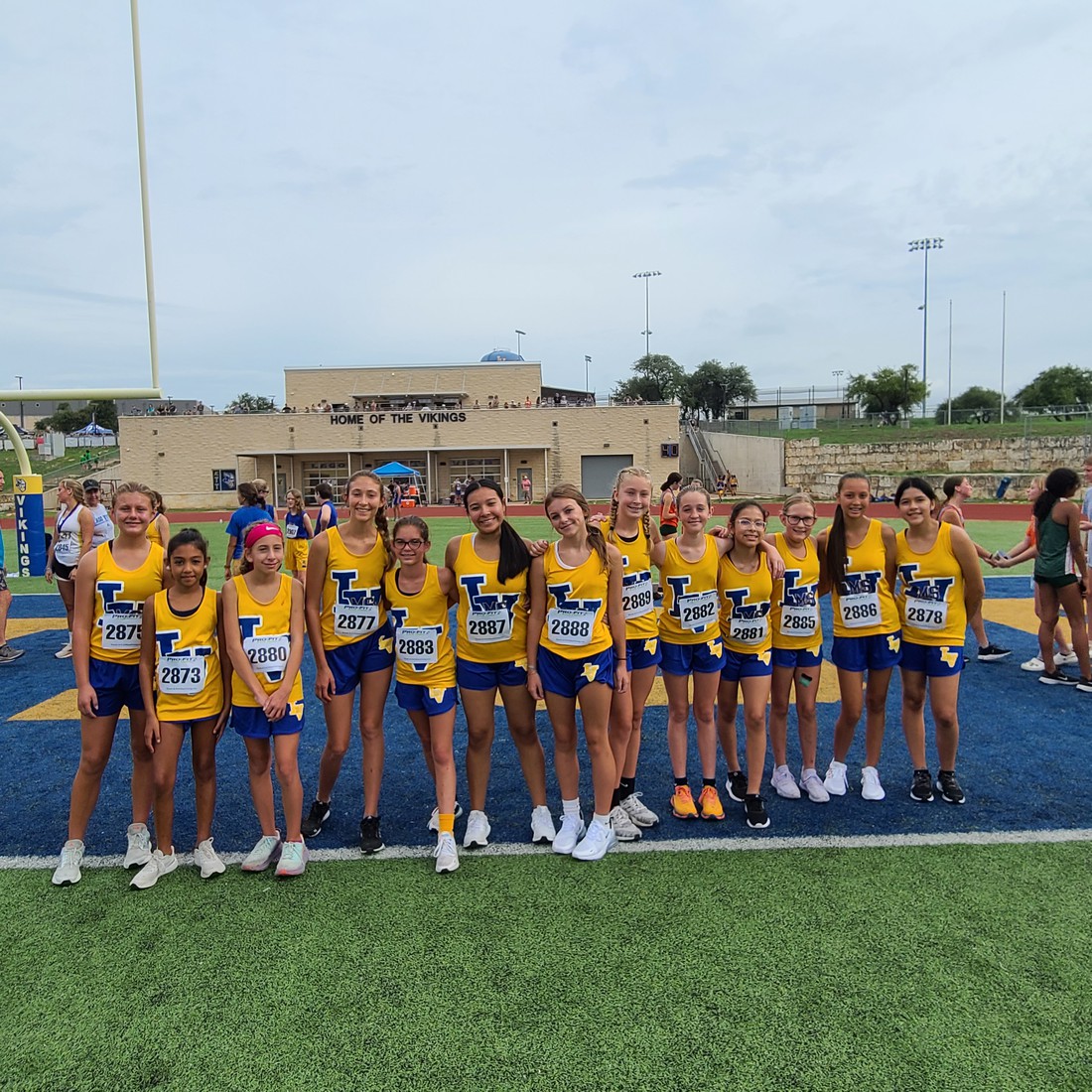 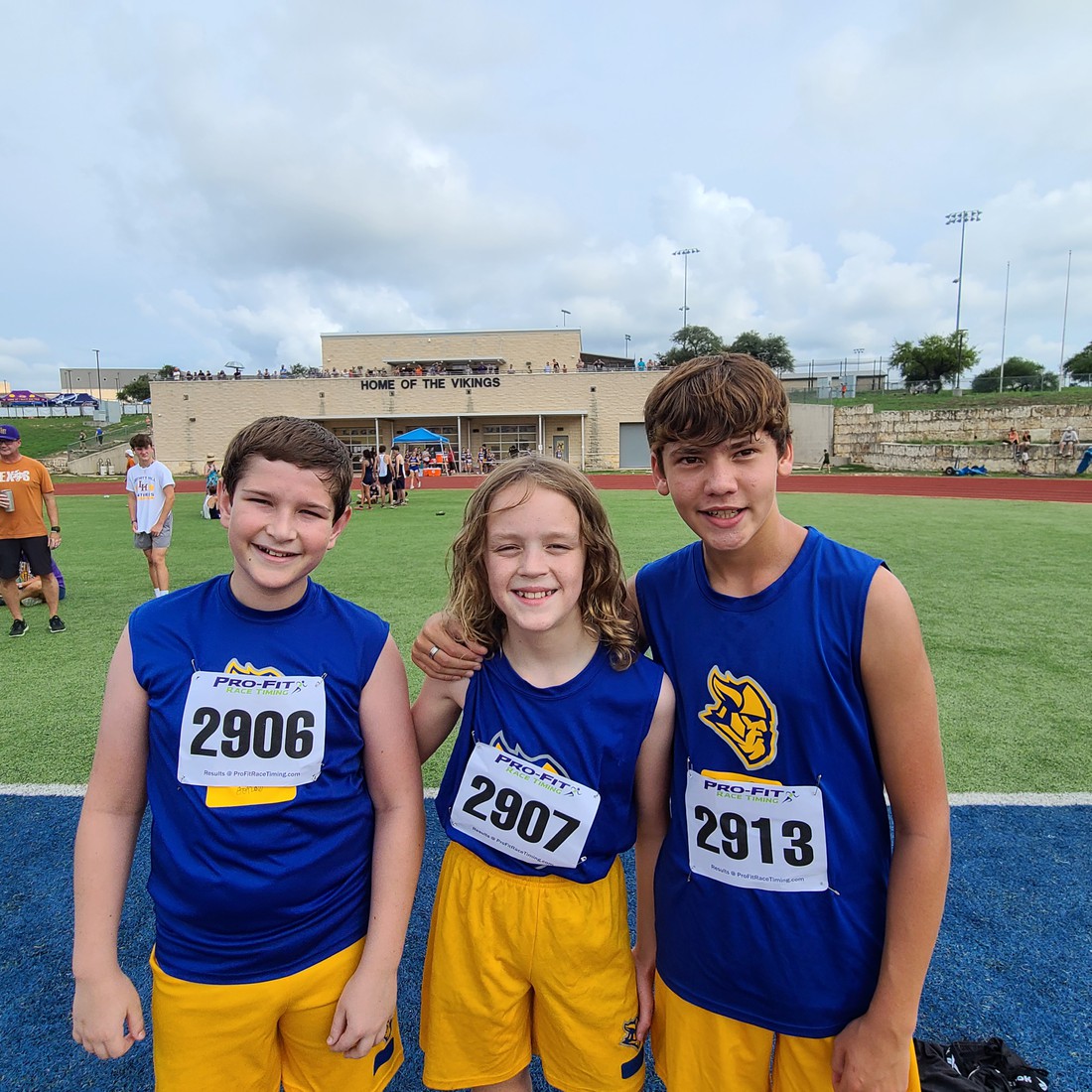 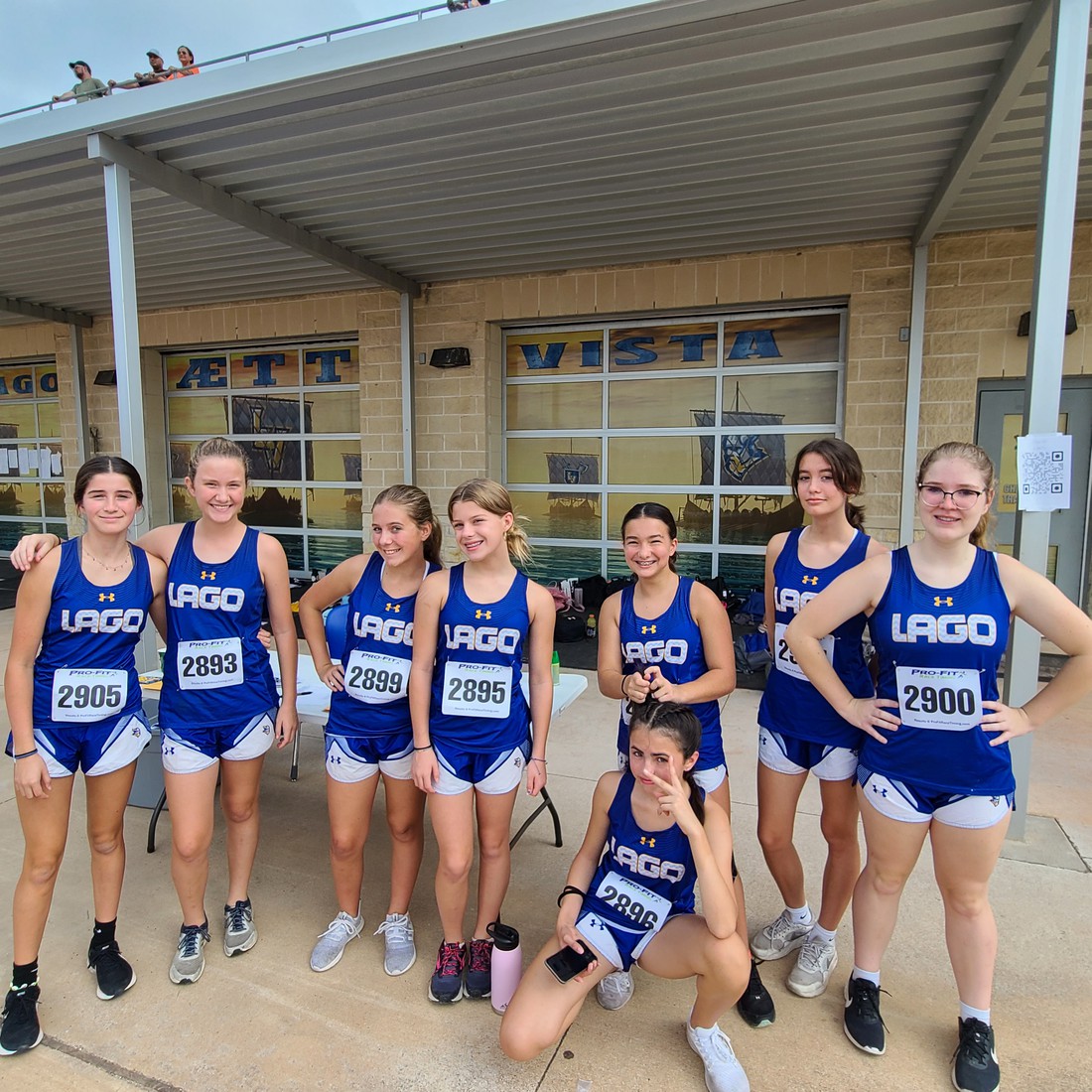 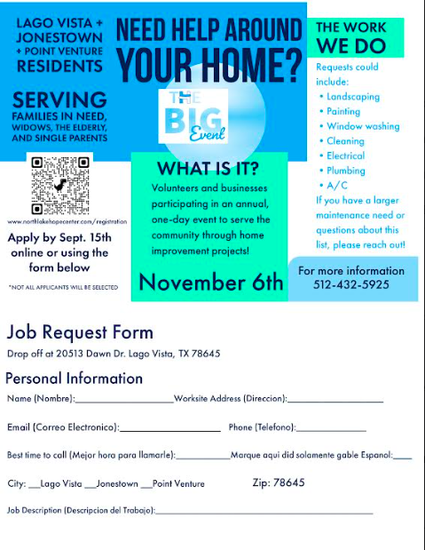 A Message From Nurse Carmichael

With a new year back in gear, we wanted to update everyone on this year's Covid Protocol. Instead of students staying home for any single Covid symptom, we have differentiated the symptoms into milder and more serious ones. Please see the different symptom lists here. The number of restricted days has also changed from 10 days to 5 days of isolation.

We hope this helps clarify the process for everyone.
Please don't hesitate to call your nurse if you have questions. 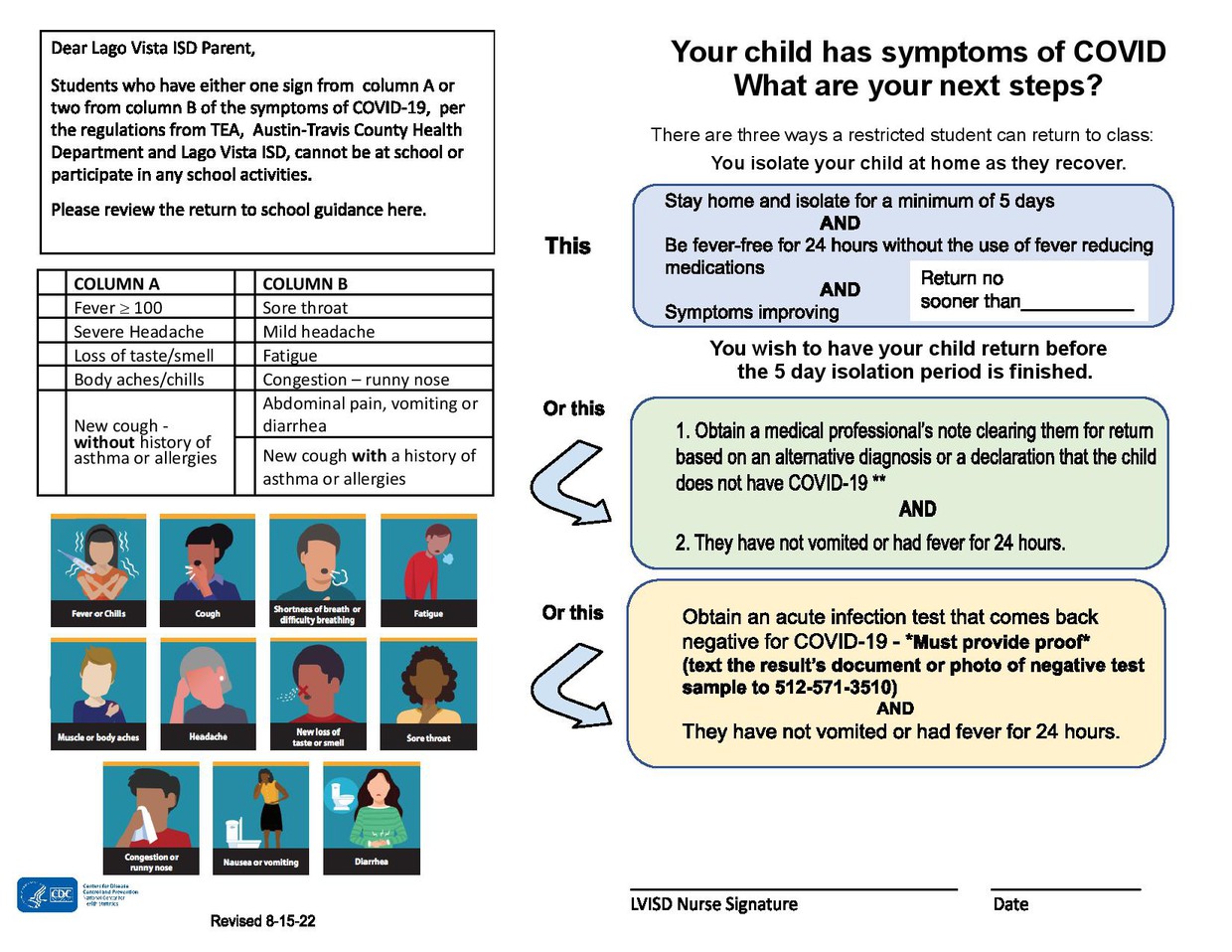 Want To Watch The Football Game But Can't Make It?

Coach Hill and I broadcast the Varsity Football games...watch them by following this link!

Over the weekend, they will be connecting the main power to the addition, and we will have light! 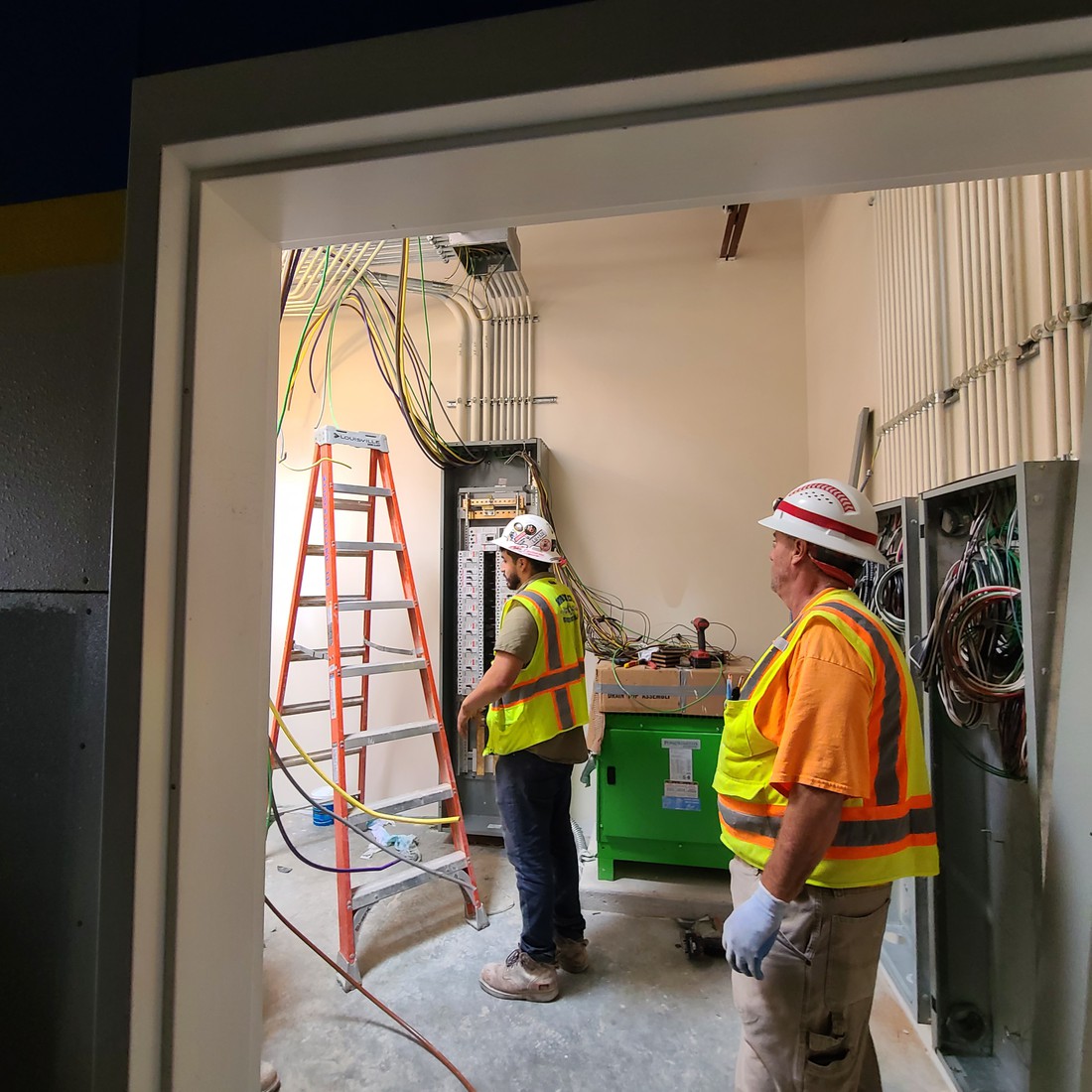 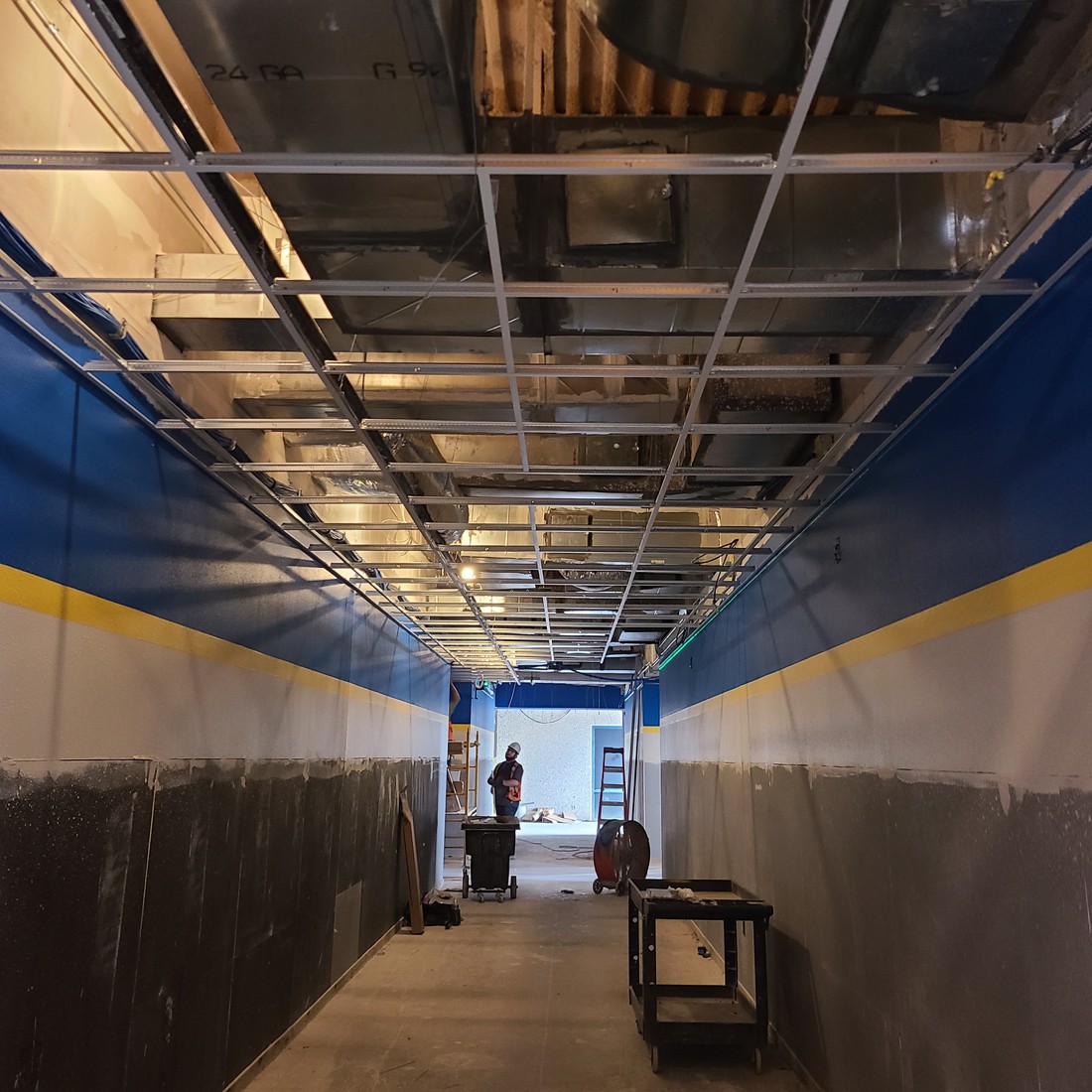 If you have registration questions, email Monica Kaiser - mkaiser@lagovistaisd.net

Schedule Questions? Our counselor April Woodburn can help you! awoodburn@lagovistaisd.net

General Questions? Sue Kunze, our campus secretary can find almost any answers for you. skunze@lagovistaisd.net 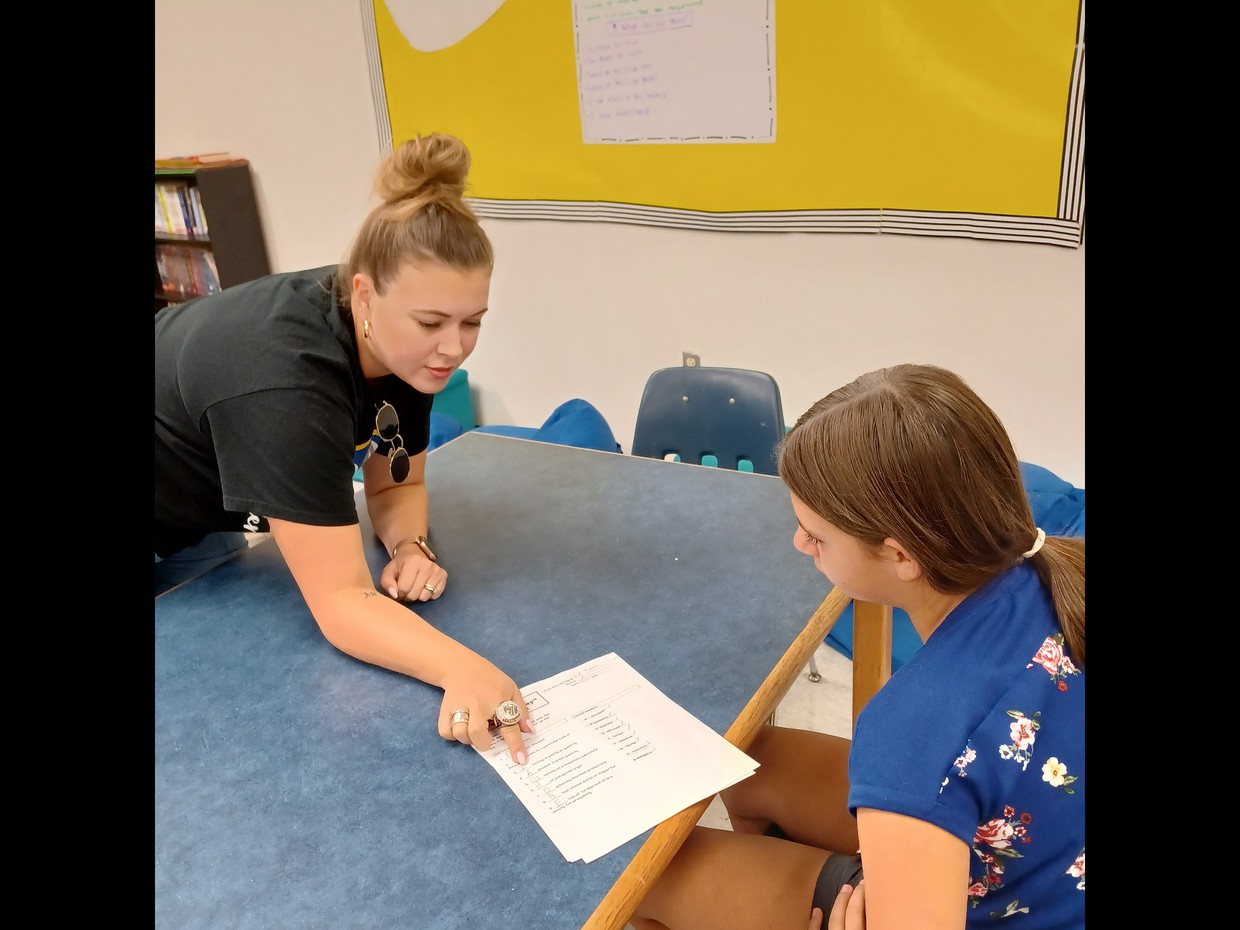 1) Where are you from originally?

I am originally from McKinney, TX.

2) What led you to become a teacher and how long have you been teaching?

I always felt led to have an occupation that influenced others in a positive way. Teaching just felt like the obvious choice! I took a few classes in college and fell in love with education! I was really hooked when I started student teaching and seeing the impact I, and other teachers, could have on a child.

I am married to Coach K and we have 3 children, Karter, Kooper, and Keelye. Our weekends are spent being our kids entourages to their various sporting events! Our family enjoys lazy days any chance we can get, which is not often!

4) What are your favorite hobbies?

I enjoy cooking! I love finding and trying new recipes! I have recently ventured into baking and have enjoyed it more than I thought I would!

5) What is your favorite thing about LVMS?

My favorite thing about LVMS is how the staff works together for the betterment of our students! We truly put students first and help nurture them into becoming well rounded young adults by the time they leave us.

Lago Vista Youth Basketball Wants To Hear From You!

WE WANT TO HEAR FROM YOU! Your feedback matters. Our community is growing by leaps and bounds. To ensure that we can support our kiddos and growth -- we need to learn a little bit more about what's important to you as parents. Please help us out and FILL OUT OUR SURVEY.

Recreational play: For the player that is at the beginner level, or who has been playing for around 3 years or less. They are either new to the sport, have some experience playing in camps or at school. Players are focused on learning the fundamentals, developing proper skills, learning how to play on a team and having fun.

Competitive play: For the player who is established with the sport and have been playing for around 3-5 years. They have experience playing on teams in a league and/or tournament setting. They know team basics and fundamentals and are capable of playing at a quick competitive pace in a travel setting.

Note: The results of the survey will be used to help structure our 2022-23 LV Youth Basketball season. All recommendations & changes to the LVYBB season will be the sole decision of the President and LVYBB board members using data, feedback from the community as well as availability of resources and volunteers.

The Take Care of Texas Video Contest is a fun way for young people to learn about protecting the environment and come up with creative ways to share this knowledge with others!

Students create a 30-second video that shows positive ways to Take Care of Texas. Contest sponsor Waste Management of Texas, Inc. will award prizes to the creators of the best videos.

Here is the updated bell schedule - remember that doors will not open until 8:10 and we are not able to provide supervision for your students before that time. 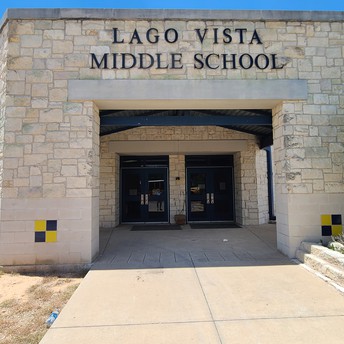 Follow Eric Holt
Contact Eric Holt
Embed code is for website/blog and not email. To embed your newsletter in a Mass Notification System, click HERE to see how or reach out to support@smore.com
close