"They're bringing drugs. They're bringing crime. They're rapists. And some, I assume, are good people." (http://www.newsday.com/news/nation/donald-trump-speech-debates-and-campaign-quotes-1.11206532)

The immigrants coming into the country are trying to smuggle across the border. For example the people of Mexican descent should get upset because they are being labeled as drug dealers and criminals. These people are coming from Mexico because the U.S. border is close to them.

"Donald J. Trump is calling for a complete and total shutdown of Muslims entering the United States until our country's representatives can figure out what the hell is going on." (http://www.cbsnews.com/pictures/wild-donald-trump-quotes/3/)

Terrorists are obviously a huge threat to any place. Muslims just happen to be the root of the terrorist attacks the past 10 plus years. Muslims are trying to flee their homelands to come to the United States for safety but the U.S. is hesitant to let them in. If we let them all into the country we don't know who is here to plan the next attack and look at places where it would be "good" to attack.

“As has been stated continuously in the press, people are pouring across our borders unabated. Public reports routinely state great amounts of crime are being committed by illegal immigrants. This must be stopped and it must be stopped now.” (http://thehill.com)

Illegal immigrants are causing a threat to the American citizens. We are fearing that an angry drug dealer will shoot us walking down the street mistaking us for the wrong person. The more people that are undocumented in the country the more of a threat they pose to us.

"I think the institution of marriage should be between a man and a woman," (http://www.politifact.com/)

The bible says the marriage is between a man and a woman. I grew up believing that and I still do. Traditional marriages should be the only marriages around, the gays can still be in relationships but they shouldn't be allowed to be legally married. 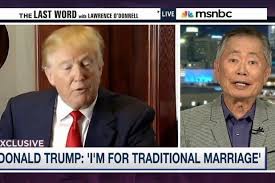 "Well, I'm a big Second Amendment person. As an example, for the horrible thing that just took place in Oregon had somebody in that room had a gun, the result would have been better." (http://www.ontheissues.org/)

When you buy a gun you should have a thorough background check seeing if you are able to purchase a gun and capable for using it for the right reasons. Felons should not be able to buy guns or people with gang activity in the past.