While some may claim that Dolly the sheep was the first creature cloned, this is incorrect. While she was the first mammal to be cloned, the famous sheep was not the first organism to be cloned. In 1885 Hans Adolf Edward Dreisch cloned a sea urchin by artificial embryo twinning. To do this, Dreisch shook the embryo until it split into two. The two embryo's continued to progress into two new sea urchins, each with their own set of genetic instructions. 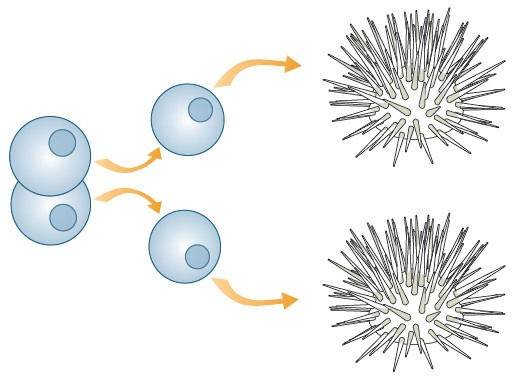 In 1902, Hans Spemann cloned a salamander by artificial embryo twinning in a vertebrate. What made cloning a salamander more difficult than a sea urchin was that the embryos are much more sticky and so they would not split when shook. To over come this, Spemann used a baby hair to make a noose so he could tie it around the embryo and tighten it until it split into two. These two embryos also continued to grow into two seperate salamanders. The biggest issue with this method is that the splitting must be done very early in the gestation process or else the embryo will not successfully grow into an adult salamander. Spemann's success showed that it is possible to clone more complex organisms which became useful for future experiments. 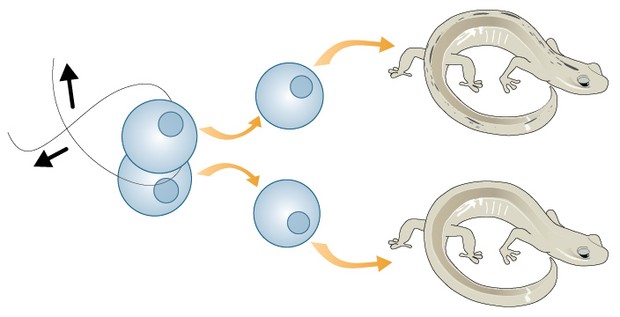 Continuing his research in cloning, in 1928 Hans Spemann was once again successful in cloning a salamander but this time by using the cell nucleus to control embryonic development. By using the same technique with the baby hair noose Hans squeezed a fertilized egg so that the nucleus was on one side of the cytoplasm, enabling the side with the nucleus to divide into cells. Once he had made 16 cells, or after four cell divisions, Spemann loosened the noose, allowing the nucleus to move into the non-dividing side of the egg. Next, like in his previous cloning, Spemann used the noose to seperate the newly created cell from the embryo. Once again, the experiment was successful and each cell grew into an embryo which later became an adult salamander. As this was the first nucleus transfer, it showed that it is possible to substitute the nucleus from an early embryonic cell for the nucleus of a fertilized egg because it will complete the same job of directing the complete growth of an organism. 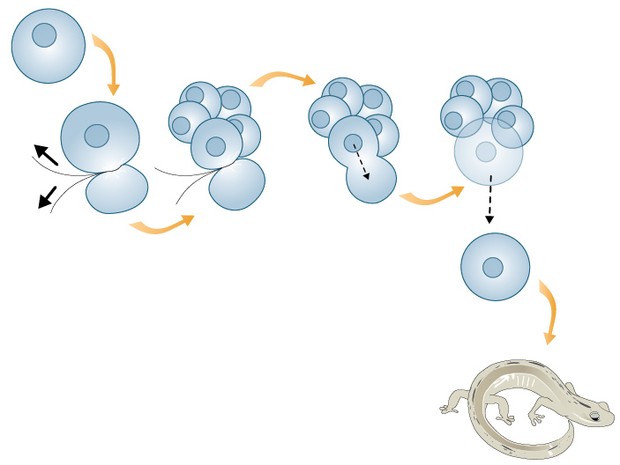 In 1952, Robert Briggs and Thomas King partnered together to be the first ones to successfully transfer a nucleus. Briggs and King took the nucleus from a young tadpole embryo and placed it into a frog egg from which the nucleus had been previously removed. The cell successfully developed into a healthy tadpole. Like Spemann, Briggs and King found that when this procedure was done on more developed embryos, it was much less successful. Of the few of these that survived, they did not grow normally. On the positive side, this experiment showed that nucleus transfer was a successful way to clone. 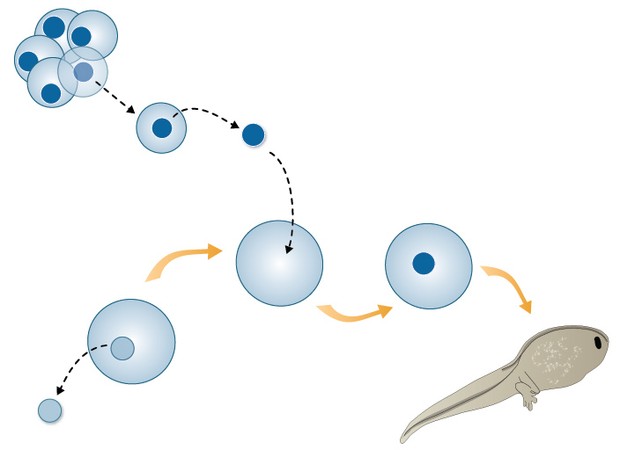 In 1958, John Gurdon placed the nucleus from a tadpole intestinal cell into an embryo with no nucleus to create a genetically identical tadpole. This proved that cloning can occur even when the nucleus is not taken from a somatic (reproductive) cell and suggested that cells get their genetic material as they divide and change. 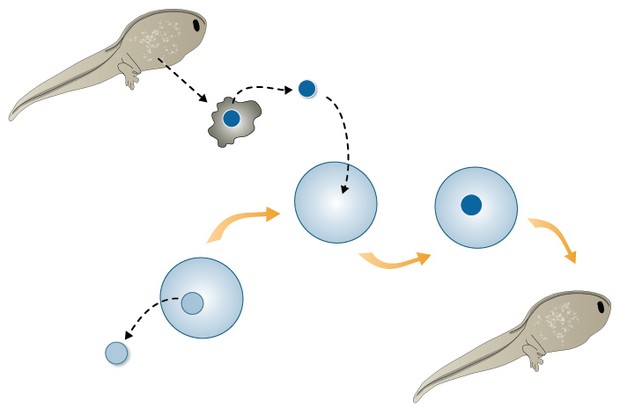 In 1975, J. Derek Bromhall became the first man to create a mammal embryo by transferring a nucleus. One of the biggest obstacles with this was that, in comparison, a rabbit cell, or any mammal cell, is much smaller than that of a frog or salamander. Because of this, Bromhall used a pipette as a tiny straw to extract the nucleus from the embryo cell and placed it in an empty egg. The experiment was considered a success when the embryo had continued to develop after a few days but it was never proven that the animal would safely and healthily mature to adulthood because Bromhall chose not to place the embryo in the womb of an adult organism. The conclusion of this experiment was that, like it is possible for salamanders, it is possible to create a mammal embryo through nuclear transfer. 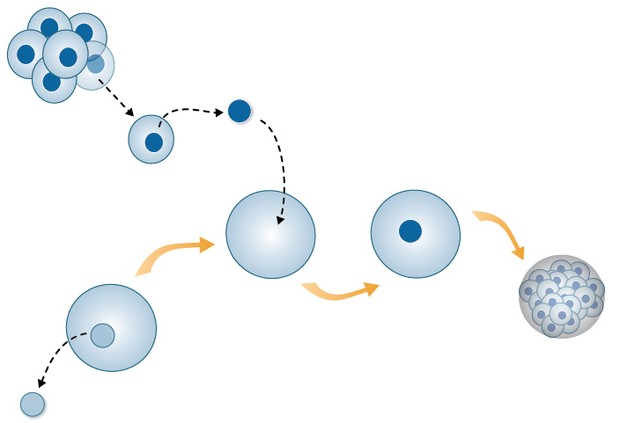 This brings us to the most famous of clones, Dolly the sheep. Dolly was created when Steen Willadsen used a chemical process to separate one embryo cell from a set of eight and fused it together with an egg with no nucleus. From here the egg continued to divide on its own like normal. After a few days, the eggs were placed in a surrogate mother of whom later gave birth to a lamb named Dolly. Dolly lived a healthy life and gave birth to another healthy young lamb named Bonnie (second photo below). Dolly lived a healthy life until she fell ill with a progressive lung disease and was put down in 2003. 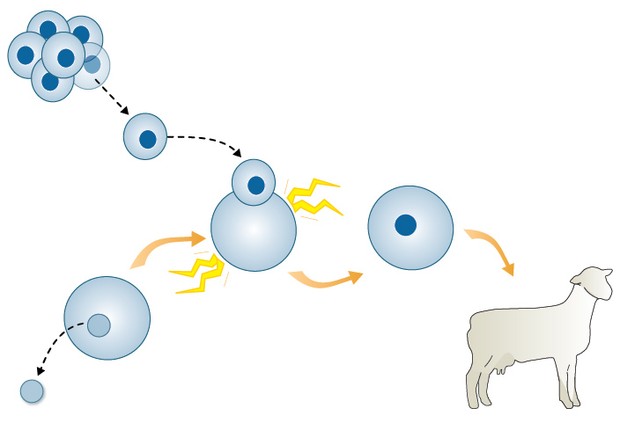 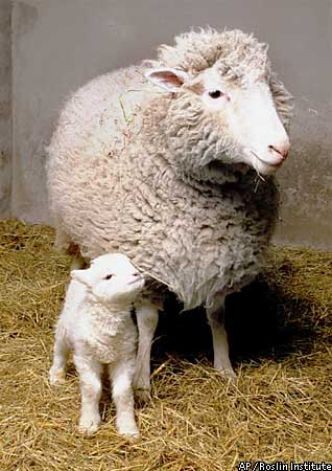 Despite false claims of human cloning, it has not yet been done. Scientists today are still working towards being able to clone a person in a safe, healthy, and humane way.