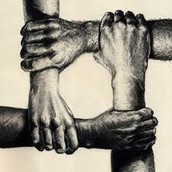 During the American Revolution, the colonies were divided by minor conflicts, however, Britain’s tyrannical presence was much more of a threat and the colonies needed to unite. This political cartoon by James Gillray portrays the colonies’ unity as they work together in order to separate Britain’s forces so they can be defeated. 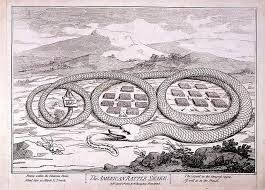 Gentlemen, Sir, I have been charged with giving birth to sedition in America. They have spoken their sentiments with freedom against this unhappy act, and that freedom has become their crime. Sorry I am to hear the liberty of speech in this house, imputed as a crime. No gentleman ought to be afraid to exercise it. It is a libery by which the gentleman who calumniates it might have profited, nby which he ought to have profited. He ought to have desisted from this project. The gentleman tells us, America is obstinate; America is almost in open rebellion. I rejoice that America has resisted. Three million of people so dead to all feelings of liberty, as voluntarily to submit to be slaves, would have been fit instruments to make slaves of the rest. I come not here armed at all points, with law cases and acts of parliament, with the statute book doubled down in dog's-ears, to defend the cause of liberty: if I had, I myself would have cited the two cases of Chester and Durham. I would have cited them, to have shown that even under former arbitrary reigns, parliaments were ashamed of taxing a people without their consent, and allowed them representatives. Why did the gentleman confine himself to Chester and Durham ? He might have taken a higher example in Wales; Wales, that never was taxed by parliament till it was incorporated. I would not debate a particular point of law with the gentleman. I know his abilities. I have been obliged to his dilligent researches: but, for the defence of liberty, upon a general principle, upon a constitutional principle, it is a ground on which I stand firm; on which I dare meet any man. he gentleman tells us of many who are taxed, and are not represented. The India Company, merchants, stock-holders, manufacturers. Surely many of these are represented in other capacities, as owners of land, or as freemen of boroughs. It is a misfortune that more are not equally represented: but they are all inhibitants, and as such, are they not virtually represented?....they have connections with those that elect, and they have influence over them. The gentleman mentioned the stockholders: I hope he does not reckon the debts of the nation as a part of the national estate. Since the accession of King William, many ministers, some of great, others of more moderate abilities, have taken the lead of government.

None of these thought, or ever dreamed, of robbing the colonies of their constitutional rights. That was to mark the era of the late administration: not that there were wanting some, when I had the honour to serve his majesty, to propose to me to burn my fingers with an American stamp-act. With the enemy at their back, with our bayonets at their breasts, in the day of their distress, perhaps the Americans would have submitted to the imposition: but it would have been taking an ungenerous and unjust advantage. The gentleman boasts of his bounties to America. Are not those bounties intended finally for the benefit of this kingdom? If they are not, he has misapplied the national treasures. I am no courtier of America; I stand up for this kingdom. I maintain, that the parliament has a right to bind, to restrain America. Our legaislative power over the colonies is soveriegn and supreme. When it ceases to be sovereign and supreme, I would advise every gentleman to sell his lands, if he can, and embark for that country. When two countries are connected together, like England and her colonies, without being incorporated, the one must necessarily govern; the greater must rule the less; but so rule it, as not to contradict the fundamental principles that are common to both. If the gentle- man does not understand the difference between external and internal taxes, I cannot help it; but there is a plain distinction between taxes levied for the purpose of raising a revenue, and duties imposed for the regulation of trade, for the accomodation of the subject; although, in the consequences, some revenue might incidentally arise from the latter.

The gentleman asks, when were the colonies emancipated? But I desire to know, when were they made slaves. But I dwell not upon words. When I had the honour of serving his Majesty, I availed myself of the means of information which I derived from my office: I speak, therefore, from knowledge. My materials were good; I was at pains to collect, to digest, to consider them; and I will be bold to affirm, that the profits to Great Britain from the trade of the colonies, through all its branches, is two millions a year. This is the fund that carried you triumphantly through the last war.... You owe this to America: this is the price America pays you for her protection. And shall a miserable financier come with a boast, that he can bring a pepper-corn into the exchequer, to the loss of millions to the nation? I dare not say, how much higher these profits may be augmented. Omitting the immense increase of people by natural population, and the emigration from every part of Europe, I am convinced the whole commercial system of America may be altered to advantage. You have prohibited where you ought to have encouraged, encouraged where you ought to have prohibited. Improper restraints have been laid on the continent, in favour of the islands. You have but two nations to trade with in America. Would you had twenty! Let acts of parliament in consequence of treaties remain, but let not an English minister become a custom-house officer for Spain, or for any foreign power. Much is wrong; much may be amended for the general good of the whole....

The gentleman must not wonder he was not contradicted, when, as minister, he asserted the right of parliament to tax America. I know not how it is, but there is a modesty in this House, which does not choose to contradict a minister. I wish gentlemen would get the better of this modesty. Even that chair, Sir, sometimes looks towards St. James's. If they do not, perhaps the collective body may begin to abate of its respect for the representative...

A great deal has been said without doors of the power, of the strength of America. It is a topic that ought to be cautiously meddled with. In a good cause, on a sound bottom, the force of this country can crush America to atoms. I know the valour of your troops. I know the skill of your officers. There is not a company of foot that has served in America out of which you may not pick a man of sufficient knowledge and experience to make him governor of a colony there. But on this ground, on the Stamp Act, when so many here will think a crying injustice, I am one who will lift up my hands against it.

In such a cause, your success would be hazardous. America, if she fell, would fall like a strong man. She would embrace the pillars of the state, and pull down the constitution along with her. Is this your boasted peace? Not to sheathe the sword in it scabbard, but to sheathe it in the bowels of your countrymen? Will you quarrel with yourselves, now the whole House of Bourbon is united against you...

The Americans have not acted in all things with prudence and temper. They have been wronged. They have been driven to madness by injustice. Will you punish them for the madness you have occasioned? Rather let prudence and temper come first from this side. I will undertake for America, that she will follow the example. There are two lines in a ballad of Prior's, of a man's behaviour to hsi wife, so applicable to you and your colonies, that I cannot help repeating them:-

"Be to her faults a little blind

Be to her virtues very kind."

Upon the whole, I will beg leave to tell the House what is really my opinion. It is, that the Stamp Act be repealed absolutely, totally, and immediately; that the reason for the repeal should be assigned, because it was founded on an erroneous principle. At the same time, let the sovereign authority of this country over the colonies be asserted in as strong terms as can be devised, and be made to extend every point of legislation whatsoever: that we may bind their trade, confine their manufactures, and exercise every power whatsoever - except that of taking money out of their pockets without their consent.