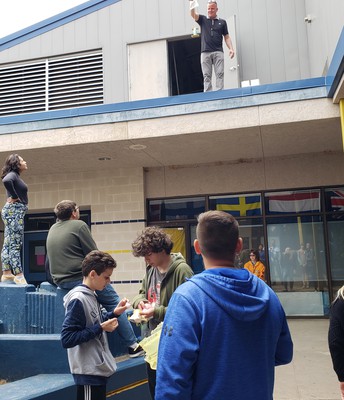 After building the different creations, the Mythbusters class went out to test them and see if their eggs could survive the fall. Some did great...others made the courtyard a bit of a mess. 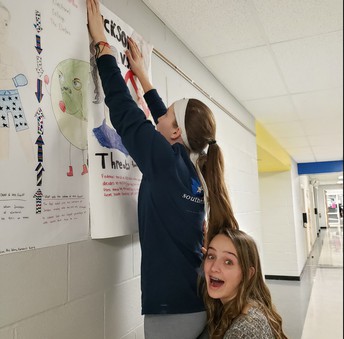 Our 8th graders were putting their posters in the halls from Coach Fox's class, and also doing a great job of keeping each other safe from falling! 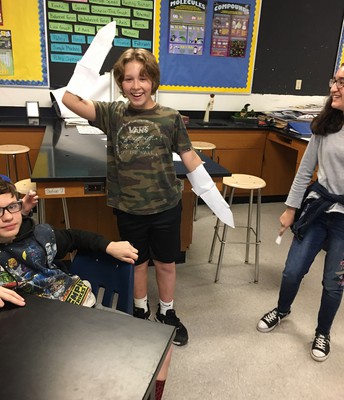 Mrs. Sosa's class came up with a presentation about various types of power this week...and we had a real life wind turbine! 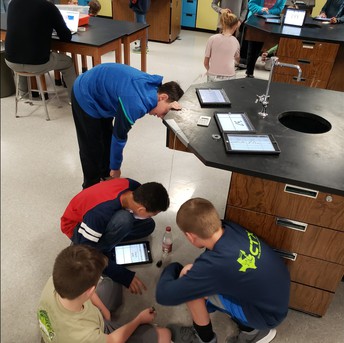 Coach Hill's class worked on an experiment to measure force and distance...and they had a great time knocking over Dr. Pepper bottles! 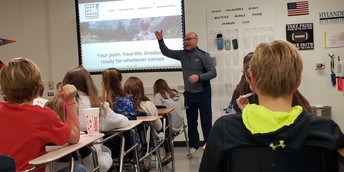 Getting Ready for HS

Coach Hylander's 8th Grade College and Career class discussed the various types of endorsements they will be able to earn when they get to high school next year. 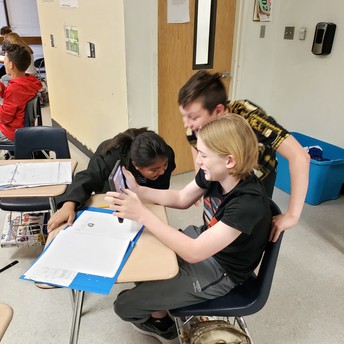 Coach Jackson's Health class were going over ways to express their emotions. This group was writing a song and it was awesome. 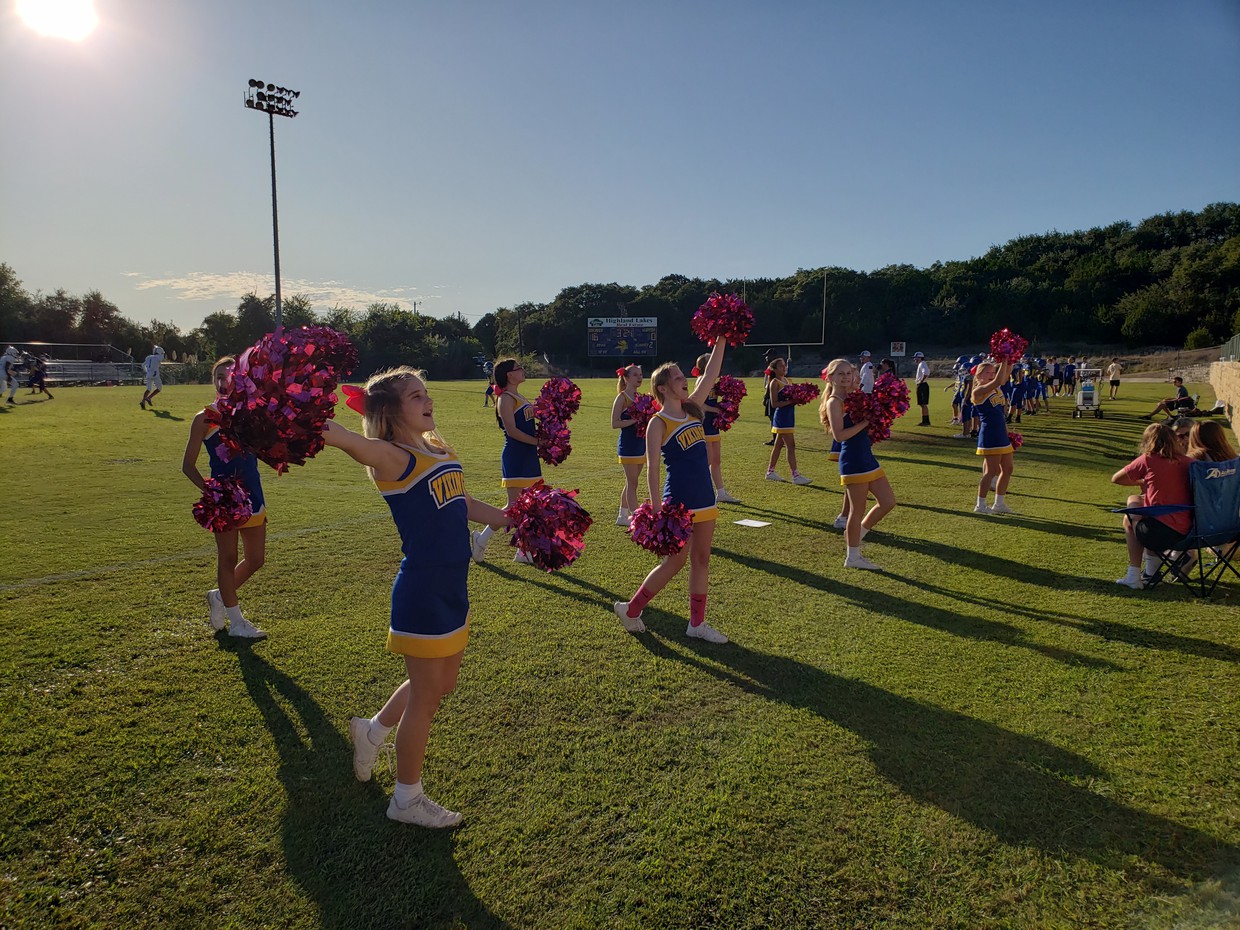 Cheer tryouts are around the corner!

Any upcoming 7th and 8th grade cheerleader candidates need to fill out the Cheerleading Tryout Application. (These are QR codes posted around the school).

There will be a MANDATORY Informational Meeting on Tuesday, March 3rd from 7:30-8:00pm in the LVMS Cafeteria. If you are unable to attend please make sure you send a representative. You will be receiving important information about cheer tryouts and other upcoming mandatory events.

Valentines Day at a middle school campus...what could possibly go wrong?? The PTO will be selling Flowers for Friends during this week's lunch, however, that will be the only deliveries made during Valentines Day.

If your student gets a delivery of flowers, candy, or any other Valentines Day gift, they will have to pick it up in the office after school is over. Thank you! 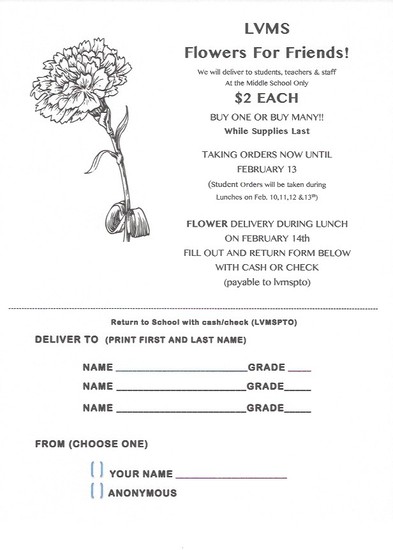 In an effort to increase safety and security for all of our students, beginning on Monday, February 3rd, all visitors will have to leave their photo ID in the front office until they check out. If you have any questions, please contact eric_holt@lagovista.txed.net

Here is the schedule for Benchmark testing in the Spring. All tests will start at 8:30, unless noted otherwise.

Follow this link - https://www.yearbookordercenter.com/?event=general.displayLanding&jobnumber=18995 to buy a Yearbook. Yearbooks on sale until March 31st.

Stop The Bleed Training - This Week!

HB 496 requires districts to annually offer instruction on the use of a bleeding control station to students enrolled in grades seven or higher. LVISD will offer this free training to students and their parents on Wednesday, February 12 from 6:30 - 7:30.

Due to space and resource requirements, please RSVP for this training with Heather Stoner at heather_stoner@lagovista.txed.net. 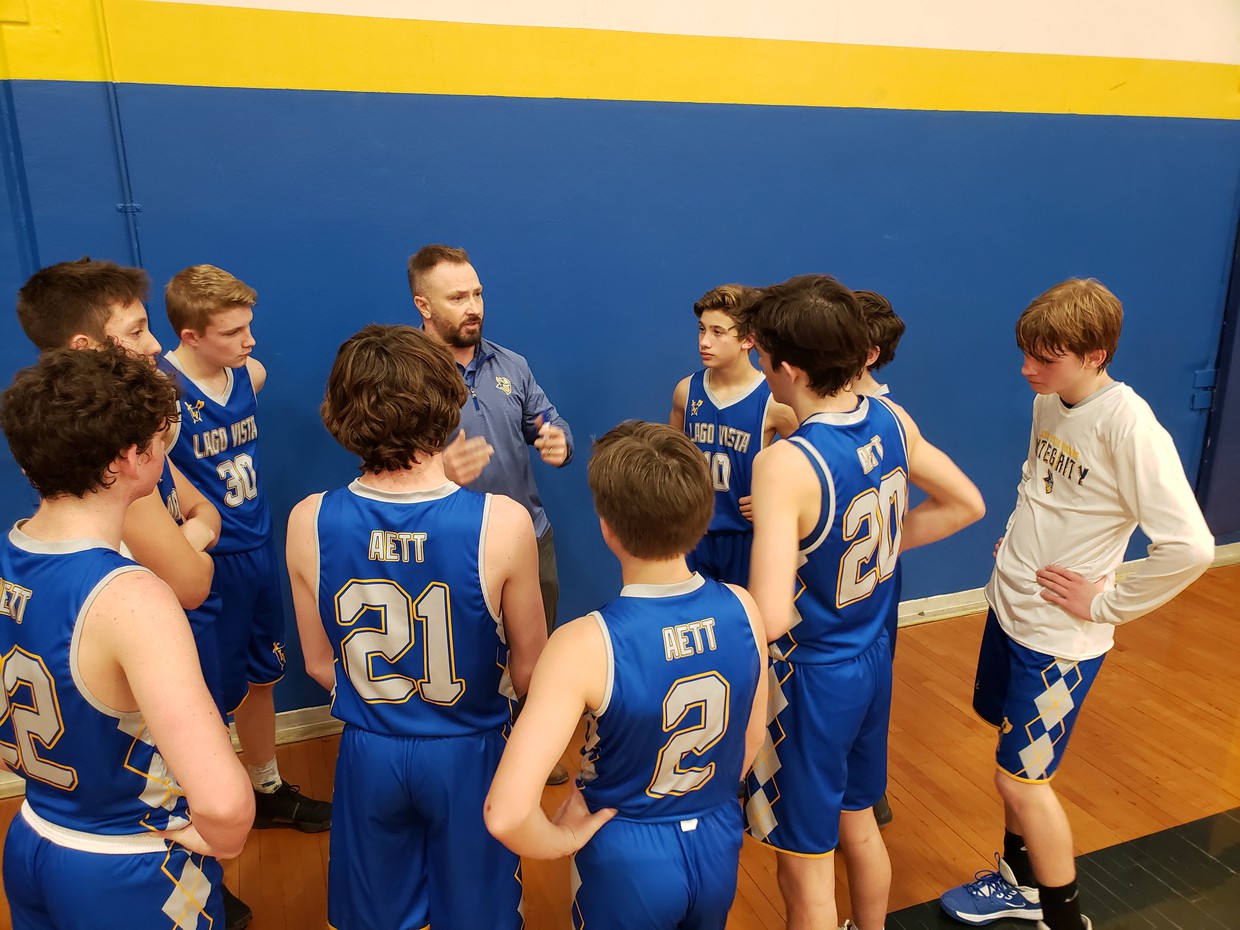 The 8th grade A team played the Blanco Panthers this week in Blanco. This was a hard fought game in which the lead went back and fourth throughout the contest. In the end, the Vikings lost to the Panthers by a a few baskets. This was a outstanding defensive effort by the Vikings however, they struggled with rebounds against a much bigger Blanco team. The Vikings will play Gateway this week at home.

In the first quarter of the 7A game, Lago took an early lead behind leading scorers Micah Helton and Grayson Buster. By half time, Lago had a 10 point lead with defensive specialists Brooks Jackson and Henri Sisemore leading the way. At the end of the game, Lago trailed by one until a game winning layup made by Henri Sisemore. It was an awesome game in a very intense and loud gym.

The 7th grade B team took the early lead in the 1st quarter going 8 points up. However, Blanco came back at the half and put the Vikings only up by 2. Rallying forward, the Vikings played extraordinary defense and ended up winning the game by 2 points. The final score of the game was 12 to 10 in favor of your Vikings. The defensive player of the game was Landon Jimenez, with 4 blocked shots and 3 forced turnovers.

In the 8th grade B game, the Lago Vista Vikings had a different story. The Vikings took an early lead in the 1st quarter and led at the half. The Vikings never let off the gas and ended up with a big win at the end of the final buzzer. The final score them of that game was 26 to 16, in favor of the Vikings. Defensive player of the game goes to Gannon Girard for great 2-foot defense. The offensive player of the game was Aaron Holt.

Girls Finish Their Season Against Blanco

The 8th Grade A team played at home vs. Blanco this past Thursday. Going into the game, the team knew it would be a tough challenge to knock off the undefeated Blanco squad. The LV girls played extremely hard but came up short 27-10. The season ended with LV finishing 7-3 in district play. Even though the score was lopsided, the Blanco coach informed the team after the game that we were the only team during the year that played them tough both times and gave them a challenge. Proud of their efforts and look forward to watching them play at LVHS!

Our 8th grade B team played hard against Blanco this Thursday. They improved overall but unfortunately could not bring home the victory for their last basketball game of the season. The girls played better collectively as a team and have had a great season. They did make great improvements overall throughout the year and it did show. They have been a great group of girls to work with this year! Those that contributed to the team against Blanco were: Sabrina Vaughan, Gabby Spragley, Ava Loucks, Cheyenne Hernandez, Bethany Arozco, Isabelle Johnson, Nadelyn, Gracie Clarkson, Julietta

Lago Vista faced off against Blanco at home Thursday night to finish their season. The Lady Vikings came prepared ready to play hard, smart, and aggressively taking the lead to 10-2 at the end of the first quarter. They kept up the defensive pressure and only let Blanco score 4 more points, making it 12-6 at the half. The Lady VIkings amped up their offense in the third and fourth quarter and maintained the same strong defense, ending the game 21-8. Congratulations Lago Vista on an amazing season!!

Our blue team was determined to have a victory against Blanco again this season for their last home game and they succeeded! It was a low scoring, nail biting match the entire game and they finished ahead by one point with a final score of 9-8. Paige Parsons led the team with 4 points. We saw great improvement defensively with Sydney Abbitt who had to step up as a starter and also scored 4 points. I am very proud of their hard work this season! Also contributing to the team were: Sienna Parsons, Isabella Adams, Claire Brumfield, and Lily Medina.

Follow Eric Holt
Contact Eric Holt
Embed code is for website/blog and not email. To embed your newsletter in your email, click HERE to see how or reach out to support@smore.com