Aristotle was more of a philosopher rather than a poet. He writings covered many subjects including physics, logic, and human nature. However, he also wrote many writings over poetry, music, and theater. Aristotle had a set of rules and definitions on how to make tragedies and what defines them. It includes: recognition (Anagnorisis), tragic flaw (Hamartia), Reversal (Peripeteia) and Aristotle's Poetics.

Tragedy- a form of drama based on human suffering that invokes in its audience an accompanying catharsis or pleasure in the viewing and always ends with a sad ending.

Aristotle didn't write any tragedies himself, he just wrote pieces telling playwrights how he thought tragedies should be made. 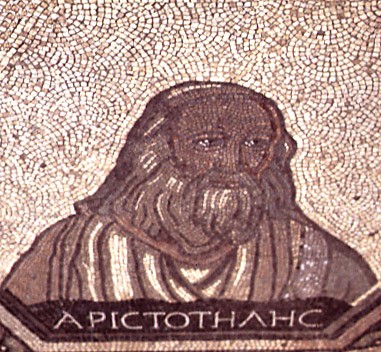 Recognition is one of the three terms that Aristotle uses in defining tragedy. Throughout the play the hero or heroine may achieve some kind of revelation about human fate, nature, or the will of the gods.

The recognition in Medea seems unclear but when Medea is debating whether or not to kill her children she is in a moment of weakness. She is so caught up in making sure she didn't leave her enemies unhurt that she slaughtered her children just to get to Jason. Her desire for revenge makes her shift to knowledge and she continues to plan how to kill her children.

"A change from ignorance to awareness."

In just about all Greek tragedy plays the hero makes a mistake that eventually brings upon their downfall. Not because he is morally bad or sinful, but just because he doesn't know enough. The actual Greek translation is closer to "mistake" rather than "flaw." However, Hamartia may be a moral weakness, as when a character is moral in every way except for being prideful enough to insult a god.

A reversal is a change of a situation to its opposite. In Medea Jason's luck reverses, but not in one play. In the previous plays about Jason's adventure he is successful in his near impossible mission, returns with the golden fleece and a wife and should be set up for happiness. However, his luck changes when he abandons Medea and Medea slaughters his bride and his only two children.

Aristotle had 3 main rules that went along with writing tragedies:

1. Tragedies should not be episodic. That is, the episodes in the plot must have a clearly probable or inevitable connection with each other. This connection is best when it is believable but unexpected.

3. Suffering (some fatal or painful action) is also to be included in a tragic plot which, preferably, should end unhappily.