In recent years it was shown that compared to other developed countries Canada has an average rate of approximately 1 percent. United states also has a similar growing rate however when it is compared to other countries it is higher including Europe. In 2005 Canada had the largest net international migration as a portion of population growth Canadian population increased during the mid 1900's. the fertility rate levels were very high. however Canada's population growth is heading into a zero growth rate. 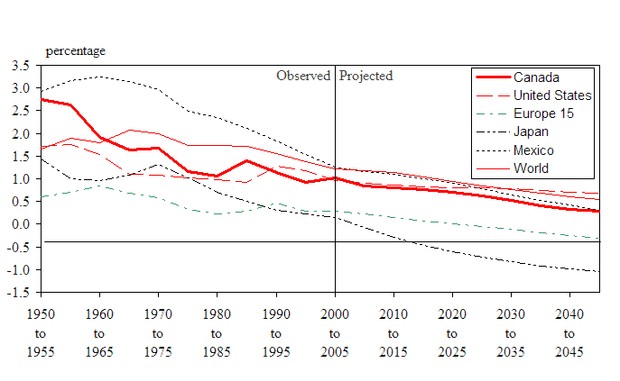 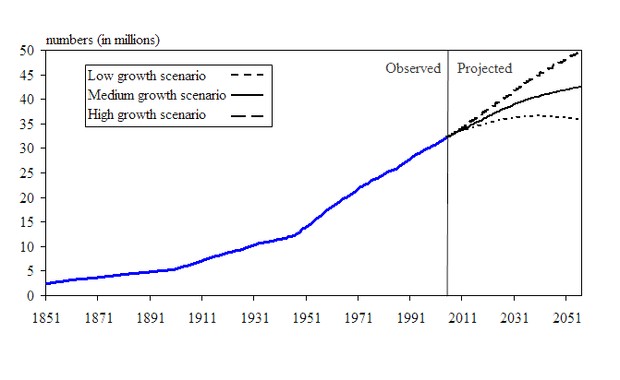 There is Currently 250,000 immigrants immigrating to Canada yearly. Immigrants come to Canada mainly because of its availability of jobs, better health care, guarantees any child no matter what gender; boy or girl to have an education, guarantees any "Canadian Citizen" rights such as voting. Many immigrants leave their home country because its; overpopulated, unsafe/poor living conditions, poverty, lack availability of jobs, corrupt government, and/or war. Most immigrants come from Asia(including the middle east), the Philippines is Canadas main source of immigrants, they also come from india, china and Pakistan. Immigrants tend to live in cities with over 100,000 inhabitants, such as Toronto,Vancouver,Edmonton and Montreal. About 70% of immigrants choose to live there because it has diversity of other cultures and more job opportunities.

I predict in 2050 immigrants will continue to come from Asia(including the middle east) China, India and Pakistan.I think that as Africa and the other developing countries start to develop more, there will be more immigrants coming from there too. They will go to cities with over 100,000 inhabitants such as Toronto,Edmonton, Vancouver and Montreal(because of the job availability and diversity to other cultures.) As more immigrants come they major cities will become over populated,and small towns will become cities. Some challenges Canada might face is overpopulation and lack of resources due to the amount of people in Canada.

In this Picture you can see that most immigrants come China Pakistan India and the Philippines. Africa isn't developed yet so I predict that in the future when its more developed people will start to immigrate more as well.

and will most likely not come from the African and American countries because currently there is a deadly disease called Ebola, which was created by the American government and it's going around in African and America countries which is causing internal bleeding and is a form of 'population growth control'(conspiracy theory)so Canada will stop allowing people from certain places that have the virus such as Africa and America, to stop immigrating into Canada.So,as time goes on the virus would spread and canadas immigration will be isolated and slowing coming to a stop