The History of Ice Cream

Who doesn't enjoy a chilly and flavorful treat on a hot summer day? Ice cream is a very popular snack or dessert around the world. Many nations claimed to have invented it, but it appears to be an American symbol now. Quaker colonists introduced ice cream to the U.S. Up until September 9, 1843, ice cream was made by the "pot freezer method." Nancy M. Johnson of Philadelphia, Pennsylvania, was the first U.S. patent for a small-scale handcranked ice cream freezer. In the year 1850, a dairyman named Jacob Fussell from Baltimore, Maryland, opened up the first commercial ice cream factory. His business boomed, and he became the father of the ice cream industry. One of the most popular ice cream creations, the ice cream sundae, was soon invented later on in the 19th century. In the 1930s, grocery stores started to sell ice cream. It was a big hit.

There are endless types of ice cream flavors. In fact, there are tons of colorful flavors such as strawberry, lemon, blueberry, etc. that provide a delicious taste.

Chocolate ice cream has always been one of the most popular flavors besides vanilla. Chocolate is rich, creamy, and will suit any chocolate lover.

These ice cream sandwiches are always an excitement to make. You can choose any flavor of ice cream with two cookies to make a sandwich. M&Ms, sprinkles, chocolate chips, and other ingredients are used.

What makes up ice cream? by studentsix 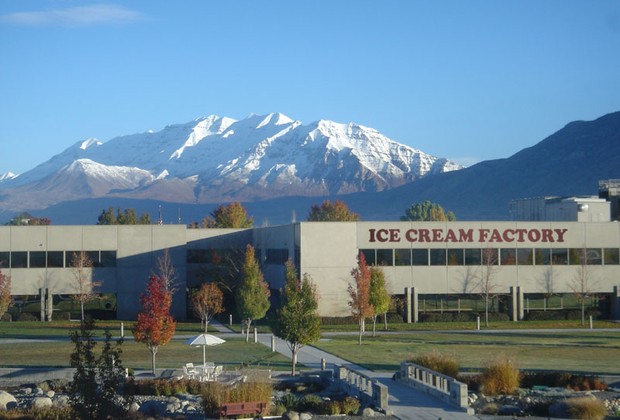 Right above is an ice cream factory. This is where ice cream is produced today. Workers are located inside, but the machines do most of the work.