Pet enthusiasts are constantly debating whether cats or dogs are superior. Now there is a report that confirms that it may be a toss-up - when it comes to drinking liquids. While one has figured out how to do lap up liquids without as much as wetting a whisker, the other has developed a smarter technique.

Physicists have long puzzled over the drinking mechanisms of the animals. That's because while humans possess cheek muscles that can create the suction necessary to draw up water, cats and dogs do not. This means they have had to get a little creative.

In 2010, a team of researchers led by MIT engineering professor Roman Stocker, decided to finally solve the mystery and spent several hours analyzing the drinking habits of Stocker's pet cat, and those of other cats, ranging from kittens to lions, by watching videos of them lapping up water.

What they discovered was that the graceful animals had figured out an efficient and elegant way to intake liquids. They began by gently touching the surface of the liquid with their tongues and then quickly pulling it back into their mouths. This quick action allowed a decent amount of water to stick to the tongue. To ensure it would not roll out, the cats shut their mouths firmly after each lap.

While that mystery was put to rest, nobody bothered to investigate how dogs drank water, largely because researchers believed they used a similar mechanism, with only one difference - they used their tongues like ladles. Turns out, this is not the case.

This latest study, the results of which were unveiled at the American Physical Society's Division of Fluid Dynamics meeting held in San Francisco from November 23 - 25th, was performed by a team of researchers from Virginia Tech and Purdue University. Similar to the physicists at MIT, the scientists began by studying the drinking habits of various dog breeds and sizes.

What they discovered was that while cats use the tip of their tongues to initiate the water column, dogs smash their tongues past the liquid’s surface. Though this creates a bigger surface area for water adhesion and allows them to draw in a larger amount of the liquid with each lap, it also makes them real sloppy.

While this was definitely a win for cats, an analysis of the force behind the tongue revealed that felines only pull with a force that is twice that of gravity; dogs, on the other hand, draw the column of water in with a force that is a stunning eight times that of gravity. Though this compounds the messiness, because it causes the water to fling out with much greater inertia, it also allows dogs to quench their thirst faster. The one thing they do have in common, is the ability to close their mouths before the liquid rolls out.

In conclusion, while cats have figured out a technique to drink water in a neat, dainty manner, dogs use sheer force to ingest it as quickly as they can. The scientists are not sure about the reason for the difference in the drinking methods. Some believe it may have to do with the sensitivity of the cat's whiskers, while others think it may be because cats hate water. Dogs, on the other hand, love getting wet.

Though this research satiates the curiosity of the researchers and pet owners, especially those that fret over their drooling dogs, it appears to have little value beyond that. Regardless, Stocker embraces the curiosity that inspired the experiments. As he states, “Although people may not appreciate that, curiosity is often what motivates science" - and who knows, the biomechanics of a cats’ tongue may someday be handy in designing robotic devices that gently move around water. 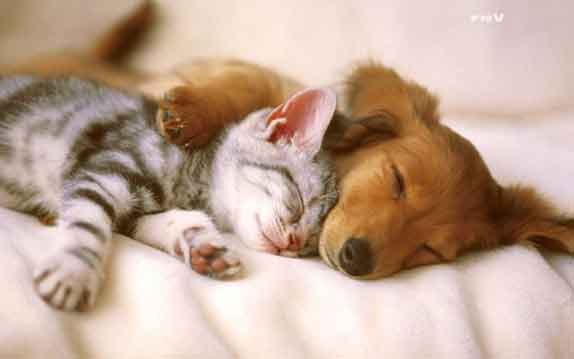 Cats truly aren't messy when it comes to drinking water, dogs can be very messy depending on the breed or just how the dog is in general (meaning not all dogs are messy). But when it comes to which one rules or drools it's just your opinion on which animal you like best. But in our opinion, we think dogs rule because they're fun, cute, soft, & really cool animals.

Follow Lea Gabriel
Contact Lea Gabriel
Embed code is for website/blog and not email. To embed your newsletter in a Mass Notification System, click HERE to see how or reach out to support@smore.com