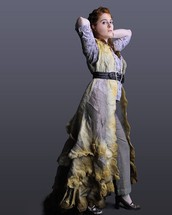 The 2 days Sheer Delight workshop by the international designer Horst on the 26th and 27th July will explore the properties of thin natural and synthetic fabrics combined with Merino wool fibers. Ofcourse you will learn how to make his very unique style with splashing colours and rich adornments. There is no need of special experience in felting. You will learn how to use the sander in the best way.

Simple pattern creations will be used in the designs for a better understanding use of templates for solid construction and durability of Horst Couture products sold in store.

Industrial dyes of choice will add a stunning accent to each piece that will be made in natural wool.

Surface design and adornments will be explored for individuality and creativity.

Bring your favorite sheer fabrics to create an original piece to fit your body to show off your very own fashion!

there are also two one day workshops in making a hat (or bag) and a vest in the wellknown Horst-style with simple adornments and flames. 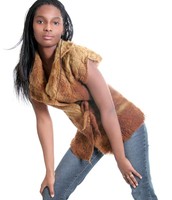 Horst, designer from Ohio in the USA, will be holding workshops in UK, the Netherlands and Germany. Horst has been creating couture dresses and garments since 2001, using his own developed method of felting. His garments have been sought after by museums and private collectors alike, and have been published countless times, both in magazines and newspapers.

He is very thrilled to come to the Netherlands for the 4th time to teach a very new and different workshop. He will be in the Netherlands also to have a fashion show at the 10th of July at the OBA theatre in Amsterdam during the downtown fashionweek. See more of his works at www.horstcouture.com

Facebook
Please send an email for more information about prices, lodging, navigation, registration and payment conditions (also available in Dutch)
Amsteldijk Zuid 180, Amstelveen, The Netherlands fiberfusing@gmail.com 0031(0)297-582384 blogspot.fiberfusing.com
B&B
workshop schedule at atelier Fiberfusing 2014
Embed code is for website/blog and not email. To embed your newsletter in a Mass Notification System, click HERE to see how or reach out to support@smore.com
close
Powered by Smore
Powered by Smore