When Was the Last Time You Wrote a Positive Note Home to Parents?

This article is a great reminder to regularly communicate positive messages with the parents or our students. I felt challenged by this, and I've decided to send positive notes home with all of the students in my SAT group. I think I'll just use our postcard style notes, so the kids will also feel free to read them. Modeling positive language is a great way to foster a culture of encouragement. I just wrote the first one!

Lessons from The Hiding Place

This week, I've been re-reading one of my favorite books: The Hiding Place, by Corrie ten Boom. If you don't know the story, Corrie, a 50-year-old Dutch woman, along with her sister and father, was part of the underground in the Netherlands during World War II, helping Jews to hide and escape. Most of her family was arrested, and she survived her time in prisons and concentration camps. After the war, she worked to help people recover and shared her story with the world.

Every time I read this book, I am challenged in a multitude of ways. The first is in the area of thankfulness. One memorable part of the story is when Corrie and Betsie first enter the dormitory at the concentration camp. They are trying to say a prayer of thankfulness, and Corrie is shocked when Betsie specifically thanks God for the fleas. Later, the sisters are amazed at their freedom to speak about God and hold worship services in the dormitory. They eventually realize that it is the fleas that keep the guards out of the room. This challenge to be thankful for things that seem awful and that we don't understand is an important reminder to me. At this time of year, when we are so busy and tired, it's easy to complain about things that we didn't plan. Instead, I want to be thankful for each "inconvenience" that arises and look for God's hand in my life through that circumstance.

Another challenge is in trusting God each step of the way, even when we don't see the big picture. "My job was simply to follow His leading one step at a time, holding every decision up to Him in prayer." Corrie wrote this when she first started trying to help Jewish people escape. She had no idea how to begin, but just walked by faith one single step at a time. How often are we called to live this way? Each decision we make and each experience we have does play a part in God's plan. We may see the plan now, in the future, or not until heaven, but we must trust that He does indeed have a plan.

As we wind down another school year, be encourage that you are in God's plan and that he already sees your future.

April 29: All S2 Newsletters must be sent out 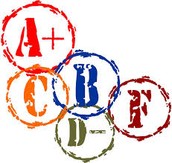 Memories of sixth grade flashed through my head the day I sat through my first training on cooperative learning. In sixth grade (and every other grade of elementary school) my teachers utilized the popular group work philosophy that was the fad at the time. In sixth grade I remember being assigned to write a report about Scandinavia with Robbie, the kid who failed every assignment he touched. Robbie sat next to me and smiled while I dutifully copied copious notes out of the encyclopedia. He nodded approvingly while I wrote the whole paper. And he grinned when we got back our A on the paper. What a team! To be fair, I did try to include him in the process, but since he had a hard time reading, it was pretty tough for him to get involved. I did read all of my notes and the paper aloud to him so that he could at least know “what we had learned.” Then and there I decided I had officially had it with group learning. I was so glad to get out of elementary school and move on to a learning system that did not involve me doing everyone else’s work for them.

Imagine the irony, then, when I was asked to take on active learning training at Dalat! What switched for me and has me embracing something I swore off at the age of 12? It was a key difference between the group learning of the 70’s and 80’s and active learning. It’s the big difference that Ken O’Conner speaks of, and it’s an important one to note for all of us using active learning. Active learning is not about getting kids to do summative assessments together! If you are grading it, do not use active learning. Active learning is practice—formative assessment. It’s short—a few questions at the most. It’s a time to process one part of the lesson and then move on to the next. It does not always have to be done in a group or pairs—active learning can also be done alone. When I hear about students sitting and doing graded class work together in pairs, I know something has gone wrong. While a pair is great for short practice, it’s not great for the homework context. It can be very unfair to both students if one is stronger than the other because it will inevitably lead to the weaker one getting the stronger one to do the work for him/her. If a student is struggling, the last thing he/she needs is someone else doing the work he/she doesn’t know how to do! Growth will never come this way. No, active learning cannot replace students doing work on their own, another necessary component of a strong education. Next week I will discuss practical steps to take to prevent active learning from going wrong while still keeping intact all the good it can offer.