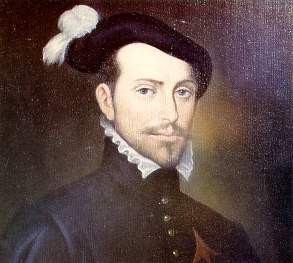 Hernando Cortes was born in Spain. The exact date of his birth is unknown, but most historians agree he was born in 1485. Of four children, he was the only boy. At 14 he was sent by his parents to school at one of the best universities in Spain. His parents dreamed that he would study Latin and become a lawyer, but Cortes didn't. After just 2 years, Hernando returned home. The 16 year old boy wanted to sail to the West Indies, search for gold, and conquer new land. He got interested in that because of Columbus' discoveries.

The Defeat of Cuba

In 1503, Hernando arrived in Santo Domingo, the capital of Hispaniola. The young explorer is now 18. 3 Years later, he joined the Spanish military and helped conquer Cuba for Spain. After his troubles, he was given a large area of land and many slaves. In 1519 Cortes was sent to the Gulf of Mexico from Cuba. His orders were for him to explore the area known as Mexico, trade with the natives there, and bring slaves from Mexico back with him to Cuba. On his journey he had horses, some weapons, and 600 soldiers. When he arrived in Mexico, Hernando didn't listen to Cuba's leader's instructions. Instead he claimed the land for Spain. He intended to take control of Mexico and start an empire for himself. The only thing in his way was the Aztec Empire.

The Aztec civilization lived along the Gulf of Mexico. They were fearless warriors who had created an extremely large empire with many cities, towns, and villages. They formed this powerful empire by defeating other groups of people. Then they would take hold of their land and force them to pay yearly taxes. A religious duty the Aztecs believed in was warfare. Prisoners captured during a war were sacrificed to their gods. They also designed their own calendar, built big temples for religious ceremonies, and created many beautiful sculptures. The Aztecs were farmers who performed slash-and-burn agriculture. First, they would chop down the trees in a section of a forest. Next they would burn the remaining vegetation. The ashes left behind had nutrients that would help their crops grow. Finally, they would plant their crops there. The Aztecs also often built canals to provide water for their crops. They turned shallow lakes into areas for their crops by scooping mud up from the bottom to form islands. They planted their seeds in the islands and added mud as normally as you add water to your plants. The mud watered the crops. 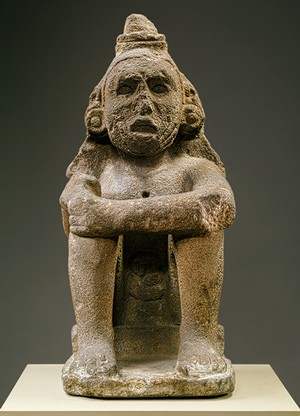 Now you know a little about the Aztecs, so how did Cortez defeat such a powerful empire?Easily. Cortes could recruit people who were defeated by the Aztecs and had to pay yearly taxes. He could recruit them because they wouldn't have to pay their taxes to the Aztecs anymore. In 1519, Hernando and his small army left. In 3 months, Cortes and his miniscule army of volunteers traveled 300 miles to the Aztec empire. Hernando Cortes was greeted very kindly by the Aztec emperor. He was given expensive gifts and even invited into the emperor's house. Clearly, the emperor had no idea about the plan Cortes was going to put into motion. Immediately, Hernando took the emperor prisoner and demanded that the Aztecs had to make a payment of gold and jewels for the emperor's safe return. At first, it went as Cortes had hoped, the Aztecs started gathering treasures to pay. But, unfortunately for Hernando, the emperor got hit in the head with a stone and died. After he emperor died, the Aztecs attacked Cortes and his army. Hernando retreated, but soon came back and formed a blockade around the whole Aztec capital. Because of this, the Aztecs couldn't get the necessary food and water to live. Thousands of Aztecs died of disease or starved. After Cortes had won the battle, he and his fighters demolished the Aztec's buildings and structures. Next, they built Mexico City right on top of the Aztec ruins. They had founded New Spain. It was now 1521. 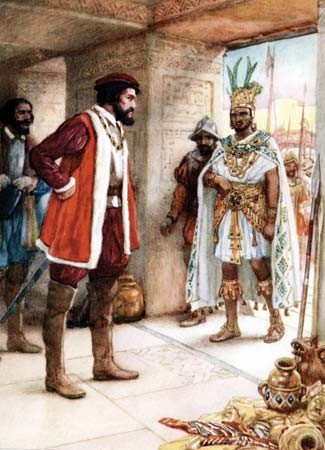 Hernando and His army fighting the Aztecs 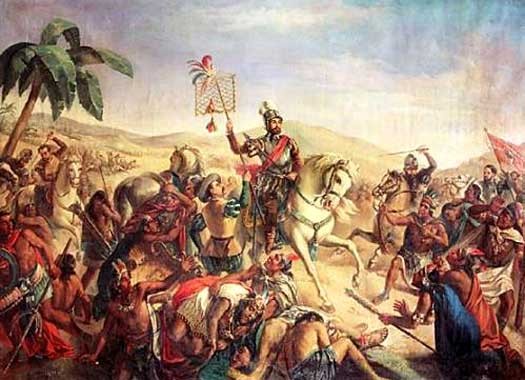 Interview WIth Hernando Cortes About Accomplishments and Sponsor

David: What do you think were your two greatest accomplishments?

Hernando: I had what I thought to be to be many accomplishments, but the two I think are most important was defeating the Aztecs and building Mexico City on top of the Aztec Empire's ruins. The blockade was the key to defeating the Aztecs. If I hadn't come up with that, I don't know if we would've beaten the Aztecs.

David: Who sponsored your trip?

Hernando: Diego Velazquez did, he was the Cuban governor at the time. He was born in Spain, like me.

King Charles V made Hernando Cortes governor of New Spain. But, because the king didn't fully trust Hernando, he also appointed four royal officials to help Cortes. Governor Cortes also founded multiple cities in New Spain. He chose men to explore and conquer new land for Spain. Governor Hernando also wanted Native Americans to give up their native customs and religions and start believing Christianity. Hernando was also one of first Spaniards to grow sugarcane in Spain. Another first was that he imported black slaves from Africa into New Spain. By now, Cortes was very rich and powerful. He put that power to use by leading a expedition to Honduras where he gained control and had their governor arrested. Leaders in Spain had become very concerned about how powerful Governor Cortes had become. Several men were sent from Spain to get him out of power. In 1528, Hernando Cortes was exiled from New Spain, or banned from his own country.

After Hernando was exiled from New Spain, he returned to Spain. King Charles V rewarded him for expanding New Spain's boundaries. He was granted permission to return to New Spain and keep conquering new land. The King also gave Hernando land in one of the wealthiest areas in New Spain. The only thing he didn't get back was his position as the governor of New Spain. In the year 1530, Cortes returned to New Spain. He put his time and energy into constructing his palace. In 1536, he explored the northwestern and Pacific shorelines of Mexico and discovered Baja or Lower California. In 1541, he returned to Spain and joined a military expedition exploring the Barbary Coast. During the expedition, he nearly drowned in a storm. After his final voyage, Hernando found himself in debt very deep. He had borrowed and spent most of his own money for his expeditions and voyages. In 1547, Cortes planned to go back to New Spain to his palace. But, sadly, he never made it back home. On December 2, 1547, Hernando Cortes died in Spain of pleurisy. If Hernando Cortes was born in 1485 (historians aren't sure, but most agree on 1485), then he lived what was then a long life of 62 years.