Karley is using Smore newsletters to spread the word online.

Get email updates from Karley: 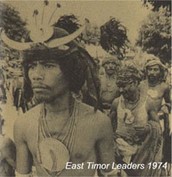 The location was in southeast Asia, East Timor.The perpetrators were the Indonesians and the victims were the civilians all men, women and children of East Timor. The Indonesian killed up to 180,00 people by starving and torture through it's 24 year occupation. In an estimation, about 73,00 people actually died from starvation and illnesses. 60,000 Timorese people had already died during the invasion.

The international response was that the US provided training and military arms. The UK also sold arms to Indonesia.

Karley is using Smore newsletters to spread the word online.

Follow Karley Alvarado
Contact Karley Alvarado
Embed code is for website/blog and not email. To embed your newsletter in your email, click HERE to see how or reach out to support@smore.com