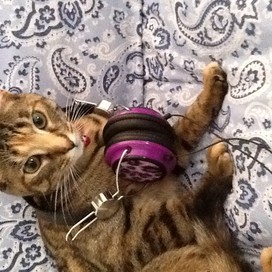 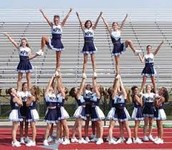 Cheerleading originated in the United States, and remains predominantly American, with an estimated 1.5 million participants in all-star cheerleading. The presentation of cheerleading as a sport to a global audience was led by the 1997 start of broadcasts of cheerleading competition by ESPN International and the worldwide release of the 2000 film Bring it on. Due in part to this recent exposure, there are now an estimated 100,000 participants scattered around the rest of the world in countries including Australia, Canada, China, Colombia, Finland, France, Germany, Japan, the Netherlands, New Zealand and the United Kingdom. 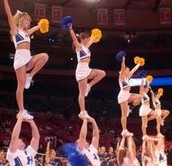 In the early 2000s, cheerleading was considered one of the most dangerous school activities. The main source of injuries comes from stunting, also known as pyramids. These stunts are performed at games and pep rallies, as well as competitions. Sometimes competition routines are focused solely around the use of difficult and risky stunts. These stunts usually include a flyer (the person on top), along with one or two bases (the people on the bottom) and, one or two spotters in the front and back on the bottom. The most common cheerleading related injuries are: sprained ankles, sprained wrists, back injuries, head injuries (sometimes concussions), broken arms, elbow injuries, knee injuries, broken noses, and broken collarbones.Sometimes, however, injuries can be as serious as whiplash, broken necks, broken vertebrae, and death.

No matter how hard it looks TRY IT!

Follow Madison Klimczuk
Contact Madison Klimczuk
Embed code is for website/blog and not email. To embed your newsletter in a Mass Notification System, click HERE to see how or reach out to support@smore.com
close