Seokhyun is using Smore newsletters to spread the word online.

Get email updates from Seokhyun:

The Development of Solar Energy

The Development of Solar Energy

Why Is Solar Energy Necessary?

Solar energy, a clean and inexhaustible source of energy, has grown at an exponential rate in the last decade and it will be the best solution to environmental damages caused by human’s overuse of unhealthy, nonrenewable resources such as oil, gas and fossil fuels.

The Documentary, "Here Comes the Sun" Gives plenty of reasons why Solar Energy will come to dominate the energy market. The earth has many conflicts, a major problem the earth has been dealing with is pollution and an unhealthy environment. The pollution from non-renewable resources is breaking down our home, the earth we live in. However the creation of solar energy has greatly affected the outcome of our earth. With this new innovation, we have clean, renewable energy that anyone can use. 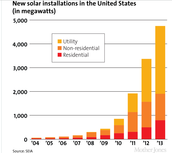 Is there a way to reduce the environmental damage from non-renewable resources?

We believe the use of solar energy can greatly affect the environment on the earth we all live on. Not only is this cost efficient but the reliability rate is much greater than using non-renewable resources. Solar power will not create pollution in our environment and will slowly heal the damage that has been created due to oil, fossil fuels and other non-renewable resources. Because solar energy is solely based on relying on energy from the sun no harmful pollution is released in the environment.

Seokhyun is using Smore newsletters to spread the word online.