What is GPS? What does it do? How does it help us?

What is GPS? What does it do? How does it help us?

GPS stands for Global Positioning System. GPS is an accurate worldwide navigational and surveying facility based on the reception of signals from an array of orbiting satellites. We use GPS in our everyday lifestyles e.g. SAT NAV. GPS war originally used to assist soldiers and military vehicles; planes and ships. However GPS isn't just here to help people find their way around places, it also has an important role in the eart sciences. Meteorologists use it for weather forecasting and global climate studies; and geologists can use it as a highly accurate or surveying and in earthquake studies to measure tectonic plates during and inbetween earthquakes.

This is something which we use in our everyday lifestyle, sometimes without even realising it. GPS is actually extremely useful to have, especially if you're lost.

These are what monitar our every move and tells us where to go through GPS, smart phones and Sat Nav.

Sat Navs aren't the only things that can tell us where we are, in fact smart phones can as well, as long as they have a certain GPS app downloaded onto the smart phone e.g. GPS tracker.

GPS has many uses some of which that were used during world war are now being used during current wars, take Afghanistan for example. GPS also allows a user to tell exactly where they are located. It determines a user&apos;s location and then displays it on the unit&apos;s electronic map. GPS can also help out the deaf people because they can&apos;t hear what people are saying, so by having GPS on a smart phone they can see where they are and see where they want to go. It also helps people who are blind by using brail and talking out loud so they can either hear or use brail to get their way around places.

What are the dis-advantages of having GPS on our smart phones???

As well as there being many advantages of having GPS on our smart phones it also has its dis-advantages. Some of the dis-advantages of having GPS on our smart phones is that our parents would be able to track us, if they had GPS on their smart phone. This means that we wouldn't be able to lie about where we have been, because they would have been able to have seen exactly where we were. However that does mean that we get to see where they have been as well. Also GPS devices are limited by having clear access to the satellites that provide the tracking. In locations with tall buildings or sparse coverage, reception can be poor. Another disadvantage is the price, as some GPS' can be pretty expensive to buy. 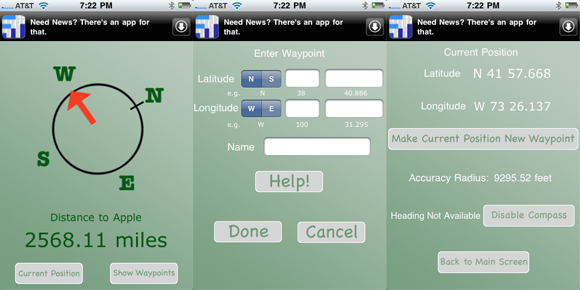 These are just some of the many apps which we can download onto our smart phones to help us find our way. The apps which I have written above are all free apps, which each have their own ups and downs.

Follow Hannah Wright
Contact Hannah Wright
Embed code is for website/blog and not email. To embed your newsletter in a Mass Notification System, click HERE to see how or reach out to support@smore.com
close