Charles Sherrington was born in Islington, London on November 27, 1857. His father, James Sherrington, died when Charles was very young. His mother, Anne Brookes, remarried Dr. Caleb Rose. He was a classical scholar and a noted archaeologist. He was very interested in English artists from the Norwich schools.

Charles was not always interested in science. After his father died, when his mother remarried Dr. Caleb Rose, is when he realized that he liked art. Dr. Rose was known for being a patron of the arts, especially liking English artists from Norwich schools. This interest in art translated from Rose to Sherrington and led to Sherrington's activism in science and anatomy.

During Sherrington's career, he did Silliman Lectures at Yale in 1904. One of his most known lectures is 'The Integrative Action of the Nervous System. Although his work was near immaculate and the lecture in itself was very well-thought out, it was two years before his lecture was published. He experienced other hardships at the end of his life when he had frail health. Although he was faced with many obstacles, he still was a very influential scientist. 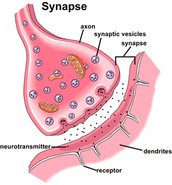 Sherrington did extensive work with reflexes. He explained that reflexes are goal-directed, and their goals are to serve as a object for natural inquiry. His work on spinal reflexes shows the most basic portion of the nervous system in mammals. Even though he gave a very simplistic idea of how the spinal reflexes work, his ideas displays examples of all synaptic (of or relating to a junction between nerve cells) functions. Sherrington realized that information is transmitted between nerve cells by contact. Due to this, he introduced the term "synapse" in 1897.

Sherrington realized that information is transmitted between nerve cells by contact. Due to this, he introduced the term "synapse" in 1897. He also coined the term "neuron." This is another word for nerve cells. These are bookends of synapses. Synapses are the gap or the junction which help the neurons transmit information. He is also known for the law "Sherrington's Law:" For every activated neuron of a muscle, there is a corresponding inhibition of the opposing muscle.

The Intergrative Action of the Nervous System

The Intergrative Action of the Nervous System started off as one of Sherrington's Silliman Lectures at Yale University. Two years after, it was published and became one of his most famous works for many years. In this book, Sherrington talked about neurology and psychology.Its respect is comparable to Isaac Newton's Principia. This is his most known book, but he also wrote others. Another well-known one is Mammalian Physiology: a Course of Practical Exercises.

Charles Sherrington was a very busy man, considering he made new words, laws and ideas. But that did not stop him from finding love and having a family. He married Ethel Mary Wright in August of 1891 and had a son who he called Carr E. R. Sherrington in 1897. In phsyique, Sherrington was well-built and not very tall. This enabled him to carry out very long researches. Even besides his family, and stature, he was a man of many skills and talents. He was a medical historian (of course), poet, book collector, and sports enthusiast. During his teen years, Sherrington was heavily involved with rugby football. Charles Sherrington was a man that did many things. He lived a long life, and died at 94 from a sudden heart failure.

"The Neuro Times: Primary Source: The Integrative Action of the Nervous System." The