By: Zach, Danae, and Grayson

By: Zach, Danae, and Grayson

Odysseus the Beggar Talks to Penelope

Odysseus and Penelope sit down and talk about Penelope's problems. She misses her husband and she doesn't want to remarry. Odysseus the beggar tells Penelope that he met Odysseus. He explains how Odysseus is a very intelligent man and that he praises him. Upon hearing this, Penelope cries, showing that she still wants to be with Odysseus. Odysseus realizes that Penelope has passed the loyalty test. Penelope also tells him about the bird dream she had.

The beggar also tells Penelope that Odysseus is sailing home and could be arriving soon. Penelope becomes very hopefully and tells Eurycleia, a wet nurse, to wash the beggar's feet.

While washing the beggar's feet, Eurycleia tells him that he looks a lot like Odysseus. He doesn't have much to say to that. Then Eurycleia sees the scar on Odysseus's leg. She recognizes the scar from a boar's tusk that was driven into his leg while hunting about 20 years ago. Eurycleia knows it's Odysseus, but she swears not to tell anyone. 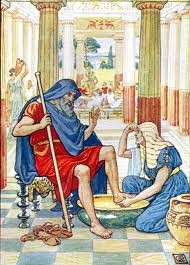 Euryclea's eyes between her joy and her grief filled with tears, and she could not speak, but she caught Odysseus by the beard and said, “My dear child, I am sure you must be Odysseus himself, only I did not know you till I had actually touched and handled you.” (Homer pg. 130)

This night began with Odysseus not being able to sleep. He couldn't stop thinking about how he should plan to kill the suitors. Then while trying to fall asleep, he hears his wife Penelope crying in her sleep. Penelope prays to Artemis saying, “Great Goddess Artemis, daughter of Zeus, drive an arrow into my heart and slay me; or let some whirlwind snatch me up and bear me through paths of darkness till it drop me into the mouths of over-flowing Oceanus, as it did the daughters of Pandareus." (Homer pg. 132) Penelope would rather die than have to choose someone to remarry.

After hearing this, Odysseus prays. “Father Zeus, since you have seen fit to bring me over land and sea to my own home after all the afflictions you have laid upon me, give me a sign out of the mouth of some one or other of those who are now waking within the house, and let me have another sign of some kind from outside.” (Homer pg. 133)

Both Sides Begin to Plan

A prophet comes to visit Odysseus and Telemachus and explains to them how he sees danger ahead because he visualized lot's of blood and death.

Follow Zach Forret
Contact Zach Forret
Embed code is for website/blog and not email. To embed your newsletter in a Mass Notification System, click HERE to see how or reach out to support@smore.com
close