In this religion you are called a Muslim. Muslims main beliefs are Prayer, Friday prayer at mosque. There is also the Declaration of Faith which is the first pillar of Islam. The last one is Follow the five pillars. The Islam Religion has many Holidays like Ramadan which celebrates Allah giving Muhammad message. The other one is Eid Al Fitr celebrates end of Ramadan;gifts,food,family,thanks. Muslims worship in a Mosque and their Holy Book is the Qu'ran. In the Mosque the worship leaders are called Imam which is a prayer leader, a mullah which is a teacher and a Muezzin leads call to prayer, traditionally from high atop a minaret. Loudspeakers are used today. Muslims also have many traditions which is the Five pillars of Islam which is a faith statement that there is only one god named Allah and Mohammad is his messenger; pray facing Mecca five times daily, charity, fasting, hajj and no eating of pork. The Holy City for Muslims The Dome of Rock in Jerusalem. There is also Mecca that is in Saudi Arabia aka Makkah. Many people think that Allah is the God for this religion but that is not true the most common God between all three religions is Abraham. The most common view between all three is they believe it is the same God that created everything.

This is a Mosque where Muslims will worship and Pray to their god.

This is a person that leads the Islam faith. 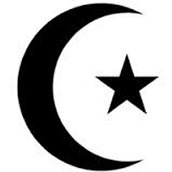 This is the symbol for the Islam religion.

These are the five pillars that represent the Islam traditions that Muslims preform.

The Qu'ran is the holy book of the Islam religion.

Mecca is the holy Islam city.
Islamic Call to Prayer - [Islam Calls You]