Hriju is using Smore newsletters to spread the word online.

Get email updates from Hriju:

Sodas Drank by Male and Female

Sodas Drank by Male and Female

Does gender affect how much soda sophomores and juniors drink on average per day?

Males drink more soda on average per day than females do. 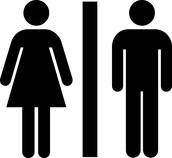 Comparative: Between males and females, who drinks more soda?

Experimental group: Sophomore and Junior males and females at CHS

Two Factors Held Constant: All subjects surveyed were of Asian descent and were sophomore or juniors at CHS. 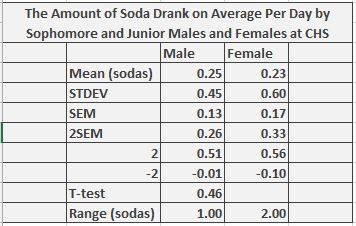 Bar Graph: The Effect of Gender on the Average Amount of Sodas Drank Per Day 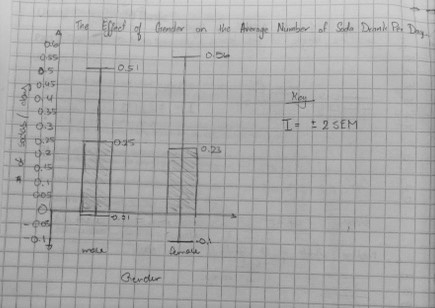 Gender does not affect the number of soda students in tenth and eleventh grade at CHS drink on average per day. Males drink an average of 0.25 bottles of soda, and females drink an average of 0.23 bottles of soda per day. There is a slight difference in the average amount of soda male and female drink, and while it can be interpreted that females drink more soda, the standard error of mean shows very little difference between the two lines of the 2SEM. The male’s ± 2SEM ranged from -0.01 to 0.51 and the female’s ± 2SEM ranged from -0.1 to 0.56. The line of 2SEM overlaps from -0.01 to 0.51, which indicates that the data was not significantly different. Additionally, in the t-test, the value was 0.46, significantly above 0.05. Since the p value was above 0.05, it can be concluded that the difference between the genders is not very significant. Therefore, the independent variable of gender does not affect the amount of soda CHS sophomores and juniors drink on average per day. According to the research about teens’ soda drinking habits, males and African Americans consume more sodas on average per day than females and white or Hispanics (1 In 4 Teens Drink Soda Daily: CDC). The result of the experiment conducted contradicts the research because the research suggests that males drink more sodas than females per day. The result in this experiment was not supported by the research because of a few possible reasons: the subjects surveyed were Asians, and Coppell students are moving from drinking soda to other sugary drinks such as Gatorade and tea. Due to cultural reasons, Asians are usually raised to drink less soda. It is also part of the Asian behavior to create wellness in their daily diet, which results them to limit cold drinks in general, and especially with meals (10 Things You Need to Know About the Asian Diet). Most of the Coppell student body participates in athletics and band. These two activities require a lot of replenishment leading them to the choice of Gatorade, which can be easily purchased in lunch lines. With Tea2Go location within walking distance from Coppell High School, students grab a quick drink before or after school, as it has become a popular hangout spot (New Tea Cafe Becomes Favorite Hangout Spot). Such factors allow students to make other choices and limit their soda intake everyday.

In the sophomore and junior class at CHS, gender does not affect the average amount of sodas drank on a daily basis; therefore, the hypothesis that males drink more soda on average per day than females was not supported by the experiment. The purpose to determine whether gender affected the amount of soda sophomores and juniors drink per day was achieved.

In this experiment, there were multiple sources of inaccuracies. To begin with, only the Asian population in CHS was surveyed, which limits the variability the data could have if subjects were chosen from other ethnicity. Asians are generally less likely to drink soda every day due to their cultural influences, which caused a limitation in the data. Furthermore, since the question simply asked how much soda they drink on average per day, the subjects had to estimate the amount and answer with whole numbers. For instance, the subject might drink soda at least once a month, but according to the data, it suggests that the subjects do not drink soda at all. Lastly, there were 25 subjects surveyed, 12 male and 13 female. This may have affected the mean of the average amount of sodas drank per day because the total sodas drank by males were divided by 12, while the total sodas drank by females were dived by 13, making the male seem as though they drank more soda per day.

Hriju is using Smore newsletters to spread the word online.