Life In The Concentration Camps By: Lexi Darrah

Life In The Concentration Camps By: Lexi Darrah

In Ashwitz I prisioner lived in old brick barricks. Three tier wooden bucks were installed in each building. The overcrowding fourced the basements and lofts to be used as living quarters also. More than 700+ people were assigned to each bunk. The barricks had no heating and we're very dirty and gross. 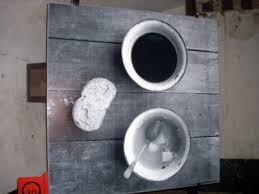 On March 31, 1942 a WVHA decree established a work day of a minimum if 11 hours in all concentration camps. Work included leveling out roads, erecting new blocks and buildings, and even laying roads. The majority of Ashwitz was near the mills, mines, and factories of Silesia which made the prisioner also do work such as dig coal, produce chemicles, and build and expand the industial plants.

At first people were shot to death in pits where gravel had been dug. From 1941-1943 most of the executions took place in the court yard of Block 11. Begging September 1941 the deaths were carried out using poisonous gas. After the dimantilation of the Death Wall many more prisioner were killed using the poisonous gas. The goal was to intimidate the witnesses and the prisioner caught trying to escape.

Outside of the gas chamber

The inside of the gas chamber