Mustafa is using Smore newsletters to spread the word online.

Get email updates from Mustafa:

The Wonders of Toronto

Home of the Observations! By: Mustafa Azhar

The Wonders of Toronto

Home of the Observations! By: Mustafa Azhar

Toronto is Ontario's Capital City and I got a chance to visit it with my class on October 28th. From what I saw, Toronto is VERY different from Mississauga. First of all, Toronto is very packed, meaning, it has a lot of people. Toronto is very developed and now it has no space left for new development on the ground. If there is to be a development in Toronto, it has to be built upwards, so for example, what I saw was that there was condos built on top of shops, which I find very amusing and interesting. Another thing I observed was that it has a lot of different types of transportation. So, Toronto has cars, buses, bikes, subways, street cars, and Taxis. In Mississauga, we do not have a subway system, we have trains but we do not have subways. We also do not have rental bikes. Toronto also has many commercial areas, for example, an art gallery, The Rogers Centre, The Eaton Centre, Ripley's Aquarium and the CN Tower. Many of the headquaters are also in Toronto. Finally, Toronto has a lot of Condo buildings because there are many people in Toronto. At the moment, Toronto has more than 2.8 million people in it. 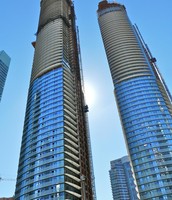 I learned that Toronto has different kind of transportation.

Some of the kinds are:

Toronto has a lot of commercial areas.

What I learned on the Trip

I learned that Toronto has a lot of graffiti. And the graffiti isn't random things (like swear words) sprayed onto the walls, the graffiti is actually really beautiful pictures sprayed on. The first picture above, is one of the graffiti's that I saw in Toronto. I also learned that there are condo buildings made on top of stores, which is kind of weird because personally to me, it does not look good. I'd rather have stores and condo buildings separated and have their own space. I also got a chance to go and experience the Kensington Market. Personally, I feel like its like Pakistan because the shops in Pakistan are exactly like the shops in Kensington Market. Finally, our bus went through Chinatown, and I was impressed to see how it was because there is a whole place dedicated to China, which is really cool. 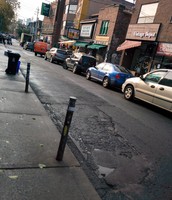 Cars parked along the road

This picture shows how populated Toronto is because they don't have enough space to park cars, so they have to park along the edge of the road.

This is one of the types of graffiti I saw in Toronto. 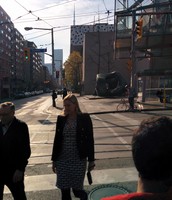 This is the art sculpture that is placed outside the Art Gallery of Ontario.

This shows how populated Toronto is.

Art Gallery of Ontario (AGO)

The AGO is a tourist attraction in Toronto. It is a place in Toronto that many people like to visit because it has all sorts of art in it.

Mustafa is using Smore newsletters to spread the word online.