Written and Illustrated by Michelle Li

Written and Illustrated by Michelle Li

It takes 84 Earth years for Uranus to make one trip around the sun. Uranus is 1.7 billion miles away from the sun. It is a gas giant. Uranus is the third largest planet in the solar system. Jupiter and Saturn are both larger than Uranus. Uranus is an interesting planet.

Did you know that Uranus is tilted on its side? Most planets have their axis tilted up, but Uranus’ axis is tilted sideways. Scientists think that an object may have crashed into Uranus and caused it to be sideways. Since Uranus is sideways, its poles are tilted directly towards the sun or away from the sun. The side that is tilted towards the sun gets 42 years of day while the other side gets 42 years of night. It takes Uranus 17 Earth hours and 14 Earth minutes to rotate one full rotation. When you look at Uranus from a telescope it looks like a smooth blue-green globe. Uranus looks blue-green because its atmosphere contains methane. Methane looks blue-green in the sunlight. Uranus has a very cold atmosphere. The average temperature is -350 degrees Fahrenheit. The diameter of Uranus is 32,000. There is no solid ground on Uranus. It’s surface is actually thick gases and ice. Deep inside the thick gases and ice there is a core that is small and rocky. Uranus has strong winds that reach the speed of 375 miles per hour. Uranus is a strange planet.

The First Mission to Uranus

Uranus has 17 moons and maybe more. In 1787, William Herschel discovered two of Uranus’ moons, Titania and Oberon. Ariel and Umbriel were found in 1851, and Miranda was found in 1948. People used to think Miranda was the smallest moon of Uranus but scientists found 10 more moons and they are smaller than Miranda. Those ten moons are believed to be made up of the same materials as Uranus’ rings.

In 1997, astronomers found two new moons orbiting around Uranus. These moons orbit in a very different path from other known moons. They are made up of clumps of ice and rock.

The moons are not circular and are much smaller than other moons. Scientists are looking for answers to why these moons are so different and why Miranda is so strange. 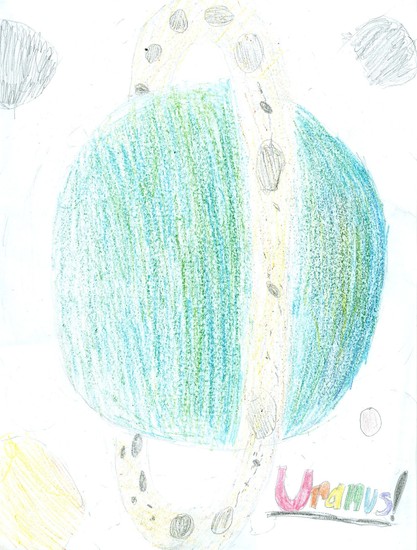