Get email updates from Debi:

February has been designated as CTAE Month to focus on the benefits of Career and Technical Student Organizations and CTAE programs in schools throughout the nation. We would like to highlight some of the great things that are going on here at RHHS!

In recognition of CTE Month, the Richmond Hill City Council acknowledged the importance of Career Tech Education in our school system and how the RHHS CTAE programs and student organizations develop employability skills, explore career possibilities, and improves academic performance through meaningful experiences during the February 5, 2019 council meeting. CTAE student members from FBLA, HOSA and SkillsUSA were present to accept the proclamation. 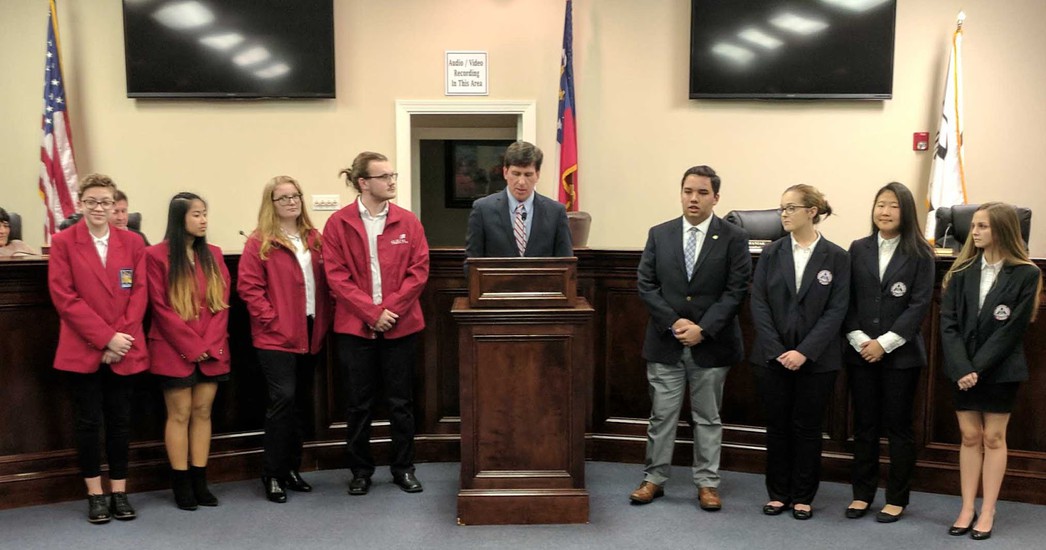 From January 31 to February 2, the Richmond Hill Model United Nations Team attended its first ever Conference at Georgia Southern University. Thirty-five students comprise the team, and they met astounding success in their inaugural year. Though the club was formed in September, Richmond Hill placed second out of twenty-one teams, many of which have competed at Georgia Southern for over a decade. Students used skills such as critical thinking, international research, and conflict mediation to tackle the globe's looming issues including human trafficking, climate change, and the escalation of tensions in Venezuela's political crisis, among others. A total of twelve students were awarded including two Honorable Mentions, ten Distinguished Delegates, and one Outstanding Delegate. Namibia (Kyle Fang) and Benin (Chloe Ricciardi) were given Honorable Mentions as part of the African Union. Togo (Kaylee Kim & Emma Griffin), Benin (Jacob Catibog & Nicolas Munsey), Bosnia and Herzegovina (Joshua Gregory & Mozeed Animashaun), and the Dominican Republic (Elle Jacobsson & Zina Shimov) were recognized as Distinguished Delegates in the General Assembly, alongside Togo (Izzy Dodge) in the Human Rights Council. Finally, Venezuela (Noah Maxwell) was recognized as the Outstanding Delegate in the Human Rights Council - rounding out Richmond Hill's awards and securing the team's ascent to second place. Though the program is now wrapped up for the season, the competitive team has its eye set on both attending more conferences and taking home first place in the years to come. 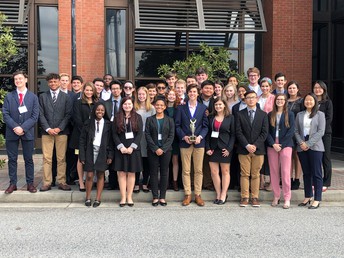 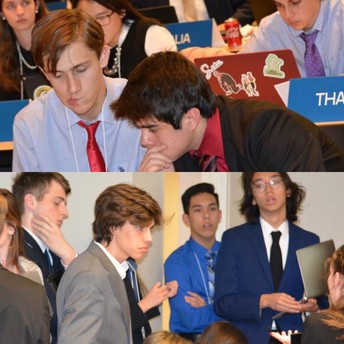 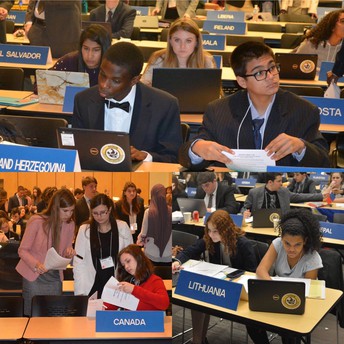 For Black History Month, the RHHS Diversity Club is piecing together an immersive experience as Richmond Hill High School's first Black History Month celebration. This celebration will teach the school community how black history started not with slavery, but with Africa. The Black History Month celebration will include all people connected to the African diaspora, to show the vastness that is the black community. This celebration will include many elements that will demonstrate the assembly’s theme. This includes a performance by the school’s dance team as a traditional African dance and step which is a dance traditional to African American history. There will also be a performance by the Richmond Hill Chorus including “The Black National Anthem” and a musical number written by Nina Simone, “To Be Young, Gifted, and Black”. And as an added bonus, numerous students are putting together an African Diaspora Fashion Show that will include numerous pieces from various African cultures around the world. The celebration will take place in room 517 after school on February 28. All are welcome to attend.

Along the hallways will be an introduction to the concept of the African Diaspora and Pan Africanism. These cultural concepts will be explored in word and pictures. Additionally, we will have a tribute to the historic culture and families of Richmond Hill, when it was known as Ways Station. Other things we have planned include a scavenger hunt and focus on other cultures connected to the African Diaspora.

RHHS has a webpage that is devoted exclusively to scholarship opportunities. We strongly encourage students to visit this page regularly. Ms. Jenny Kea, one of our Social Studies teachers, serves as our Honor Committee chair and coordinates scholarships and maintains this webpage. If you have questions, please email her directly at jkea@bryan.k12.ga.us .

The 2019 RHHS Prom will be April 6 at the Savannah Trade and Convention Center. Juniors and Seniors who have paid their class dues and are clear of the Obligations List can pick up their Prom ticket at lunch during the week of March 11. The deadline to pay class dues in order to receive a prom ticket is February 22. Any RHHS student who plans to attend Prom must be clear of the Obligations List. Students must be in attendance at school on the Friday before prom for at least half of the day in order to be eligible to attend prom.

Guests must be either enrolled in high school or out of school. No one enrolled in middle school (no matter the age) is allowed to attend. If the RHHS student's date does not attend RHHS, a Ticket Upload Request AND Prom Guest Registration form must be completed and returned to Mr. Harman in the 600 hall administration office before February 22nd.

ESPN offers a monthly SAT/ACT workshop for students called “Books and Balls”. Coordinators are considering offering this program at RHHS. Parents: would you be interested in your child taking advantage of this opportunity? Please click the link below and let us know if you are interested:

Students only pay for the years he/she attends RHHS.

February 22, 2019 is the final date to pay dues in order to get a prom ticket covered by payment of dues. Any junior or senior student who wishes to go to prom and does not pay dues before February 22, 2019, will have to purchase a prom ticket for $125. Students who have not paid dues in past years must pay those dues as well as dues for this year by the due date in order to receive prom ticket or to be able to participate in graduation week events and graduation ceremony.

Course registration for next year

Monday, February 11 is the final deadline for students to submit course selection forms to their advisor. After this time course selections will be made for them by advisor, admin, or counselor.

We have accumulated lots of lost items in our Lost and Found in the College and Career Center in room 602. If your child has misplaced belongings such as lunch boxes, clothing items, shoes, gym bags or glasses, please ask him or her to stop by and claim any lost items.

At RHHS, many of our juniors and seniors are well into their college preparation. Most are in the process of taking the ACT and SAT - and others are already visiting colleges independently and filling out applications.

RHHS is excited to be offering monthly college field trip opportunities this year to eligible juniors and seniors on a first come/first serve basis for the first 35 students to register.

RHHS junior and senior applicants must meet the following criteria:

1. Passing all classes with a 70 or higher

Eligible 11th and 12th grade students may register through this link

*Parents of the first 35 applicants each month are welcome and encouraged to volunteer as chaperones. Contact Jennifer Blanton, school counselor, at jblanton@bryan.k12.ga.us, with any questions about eligibility criteria.

Online Exam registration will end on Thu, Feb 28, 2019 at 11:59 PM. In order to register, students should click on the link provided on the school website or visit www.TotalRegistration.net/AP/112525 to register .To complete registration, students must answer all of the required questions. Registration is not complete until students have printed the pdf of the confirmation page that is provided at the end. We know that parents may desire to register their students for exams. We strongly recommend that parents and students are both present while registering to ensure that the correct exams are ordered.

Richmond Hill High School is excited to offer families the convenience of paying exam fees online at the time of registration. Please be sure to have a credit card or debit card available before beginning registration. Paying online is a great way to make sure that payment has been made while avoiding mailing payment.

Here are the important dates for the registration process:

Please contact Ms Merry Tanner, mtanner@bryan.k12.ga.us , RHHS AP Coordinator, if you would like to register for an exam not listed or have any questions.

Yearbooks are ON SALE for $80 until March 31. Also, SENIOR AD sales will end on February 15. To purchase both a senior ad and/or a yearbook, go to www.yearbookordercenter.com and key in our school’s order number (902). Once you’ve purchased an ad space, please email all text/copy and images to richmondhillyearbook@gmail.com.

The Bryan County Board of Education approved the calendars for the next two school years. Please click HERE to view the 2019-2020 and 2020-2021 calendars. 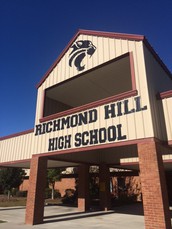 Follow Debi McNeal
Contact Debi McNeal
Paste in your blog/website to embed.
Aa Aa Aa
High Contrast Mode
Use the box below to choose the language: