Moeez is using Smore newsletters to spread the word online.

Get email updates from Moeez:

Who is Arthur Currie 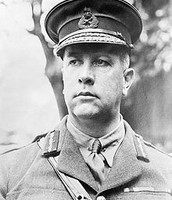 At 22 years old Arthur Currie joined the 5th regiment Canadian Garrison artillery (C.G.A) as a gunner by 1901 he had achieved the rank of corporal. While still having a military presence Currie decided to join the world of finance eventually becoming provincial manager of the Life Assurance company. By September 1909, he had risen to lieutenant-colonel, commanding the 5th Regiment C.G.A. During the first breakout of war Colonel Sam Hughes gave Currie the position of being commander of the second brigade. General Currie's promotion to brigadier general was then confirmed on 29th of september 1914 right at the beginning of the war.

What was Arthur Currie involved in that made him a leader?

General Currie had not commanded anything larger than a regiment at the initial outbreak of war in 1914. He received a brigade command in the first contingent as he proved himself being a capable organizer and training facilitator. At a time when military technology was advancing many of the other generals of the war used old battle strategies that failed to be successful with new conditions such as gas attacks and advanced machine guns, this would very often lead to an outstanding number of soldier casualties that could have been easily avoided. General Currie however made his plans with all the new conditions that are seen in war in mind. This would more often then not lead to successful battles and objectives. One example of general Currie being an excellent leader was in the battle of Vimy Ridge when the french failed taking over the 7 kilometer field with 100,000 casualties. General Currie's used the plan of digging tunnels all the way to the enemy territory where they would execute a surprise attack. This plan was made to get the mission done effectively while avoiding as many casualties as possible. Vimy Ridge was soon after captured successfully by the Canadian troops, making it their first victory in the war. Battles like this that general Currie led to victory overtime built a strong and effective reputation for the Canadian military.

Other ways of how he showed leadership

Know your enemy - and learn his favorite sport

Sir Currie shows this kind of leadership when preparing for Battles like Vimy Ridge. In the battle of Vimy Ridge specifically General Currie made a plan that he knew the Germans would not be prepared for. He knew this from watching their behaviour during previous battles. He knew that the Germans attack from no man's land which is exactly what he pushed to avoid that battle.

Appearances matter - and remember to smile

General Currie showed this kind of leadership when he would remain calm in stressful times. This is very important because the soldiers need to know that their leader is well rounded and preparing for what to do next at all times. Some soldiers in the Canadian troops have said that general Currie's confidence was best shown when preparing for a battle.

Sir Arthur Currie displayed this kind of a leadership mindset when he put his soldiers through effective and in-depth infantry training. Like how in the battle of Passchendaele there were extensive preparations. This builds soldier confidence which is an important thing for a soldier in any war, especially world war 1 were there were so many casualties. After the battle General Currie mentions "It was a truly magnificent performance, indeed it had been magnificent, not only the gritty determination shown by the Canadian infantry, but the exhausting and extensive preparations- building roads and rail lines in the mud, marshalling supplies- carried out in a mere eight days.(Dancocks 116).

Moeez is using Smore newsletters to spread the word online.