Toni is using Smore newsletters to spread the word online.

Get email updates from Toni:

*Tituba is Reverend Parris's slave from Barbados. They called her "Black Witch of Salem" (Salem Witch Trials: Tituba). This could've been racist but also because she practiced a lot of stuff kind of like witchcraft. She was different than everyone else. Her African heritage allowed singing, dancing, and spell casting. But this was highly frowned upon to Puritans. Dancing is what lead to the hysteria in Salem and Tituba probably didn’t even think anything of it because from where she’s from its harmless! One night she brought the girls out into the woods to dance and have a fun time joking around about marriage. But Abigail took this too seriously and wished death upon Goody Proctor. She drank blood and after that Betty got weird as if she was afflicted. The girls then accused Tituba of being a witch and Abigail said she made her drink blood. Tituba was beat until confessing so she confessed even though she wasn't a witch. She was the very first person to confess in Salem. She blamed others as well as herself for being seen with the Devil. She wanted others blamed and only cared for herself at this moment. Tituba ended up getting sent to jail and she stays there for the rest of the play. 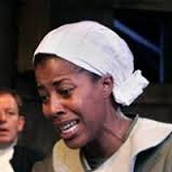 She knows she didnt do it!

About to get beat! 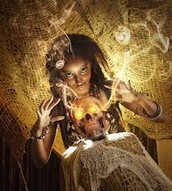 Tituba did spells for fun! 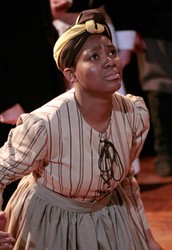 *Tituba was actually from an Arawak Village in South America (History of Massachusetts). The play said she was from Barbados, she was actually captured and taken there. Although Barbados is where Parris got her. Eventually Tituba got married to another slave named John. They had a girl named Violet and all of them lived in Reverend Parris's home. The truth is, Tituba participated on a "witchcake" on Betty, that is when she was thought of as a witch. But in the play she was thought of as a witch because of Abigail blaming her for making them drink blood and for having them dance and practicing spells and such with them. But, nowhere in the court records or contemporary accounts is Tituba said to have taught the practice of fortune telling to the girls in Rev Parris' house (Salem Witch Trials: Tituba). She only admitted to certain things , and a lot were not told in the Crucible. She admitted to signing the Devil's book, flying in the air upon a pole, seeing a cats wolves, birds, and dogs, and pinching or choking some of the "afflicted" girls (Salem Witch Trials: Tituba). Tituba seems very different from what she said in real life to the Crucible. Although, Like the Crucible, she got beat until she confessed witch she did and she was also first to confess in Salem. Tituba said “The devil came to me and bid me serve him”(History of Massachusetts). She lied because she did not want to die, she wanted her life and with that she had to lie. With this lifestyle, people had to lie to not get hung right away, and that is what Tituba did. In real life she helped out with a lot of the cases along with the other girls. She provided key evidence to the judges helping them point out witches. Tituba's husband soon became one of the afflicted. But she went to jail and couldn't really do anything. In real life she was only in jail for 13 months and then got bought out of jail by some mystery person. Those are the last records of her because then she started a new life in a new place.

Toni is using Smore newsletters to spread the word online.