An arch is a curved masonry construction for spanning an opening. 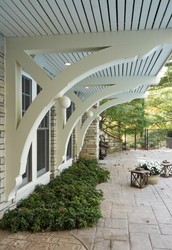 A bracket is a support, as of metal or wood, projecting from a wall or
the like to hold or bear the weight of a shelf, part of a cornice.

A buttress is any external prop or support built to steady a structure by
opposing its outward thrusts, especially a projecting support built
into or against the outside of a masonry wall.

A chair rail is a molding on an interior wall for preventing the backs of
chairs from rubbing against plaster. 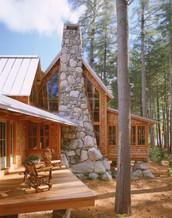 A chimney is a structure, usually vertical, containing a passage or flue
by which the smoke, gases.

A column is a decorative pillar, most often composed of stone and
typically having a cylindrical or polygonal shaft with a capital and
usually a base. 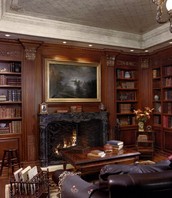 A column capital is a decretive top to a column. 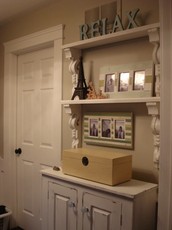 A corbel is a short horizontal timber supporting a girder. 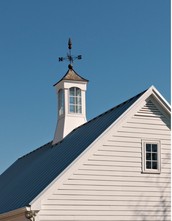 A cupola is a light structure on a dome or roof, serving as a belfry,
lantern, or belvedere.

A dormer is a vertical window in a projection built out from a sloping roof.

Eaves are the overhanging lower edge of a roof. 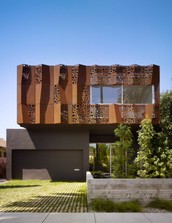 A façade is the front of a building, especially an imposing or decorative one. 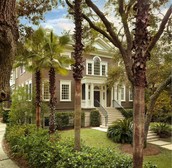 A fanlight is a window over a door or another window, especially one
having the form of a semicircle or of half an ellipse.

A finial is a relatively small, ornamental, terminal feature at the top
of a gable, pinnacle, etc. 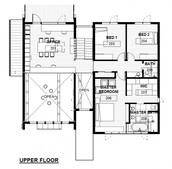 A floor plan is a diagram of one room, apartment, or entire floor of a
building, usually drawn to scale.

A fluting is something having ornamental grooves, as a Greek column.

A frieze is any decorative band on an outside wall, broader than a
stringcourse and bearing lettering, sculpture, etc. 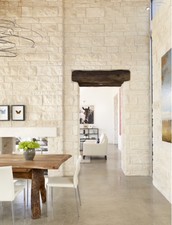 A lintel is a horizontal architectural member supporting the weight above
an opening, as a window or a door.

Masonry is cement blocks, clay blocks, brick blocks, that form the exterior of a building 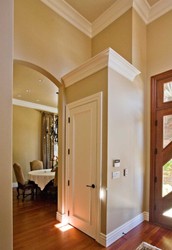 A molding is a strip of wood, stone, uniform cross sections for the full
length and a strikingly modeled profile that casts strong shadows:
used on frames, tables, etc., and certain architectural members, as
cornices, stringcourses, or bases.

A mullion is a vertical member, as of stone or wood, between the lights
of a window, the panels in wainscoting, or the like.

A parapet is an elevation raised above the main wall or rampart of a
permanent fortification. 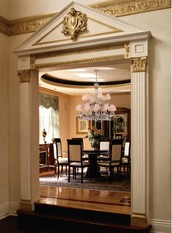 A pediment is typically triangular with a horizontal cornice and raking
cornices, surmounting a colonnade, an end wall, or a major division of
a façade.

A pendant an ornament suspended from a roof, vault, or ceiling.

A pilaster is a shallow rectangular feature projecting from a wall,
having a capital and base and usually imitating the form of a column.

A pillar is an upright shaft or structure, of stone, brick, or other
material, any upright, supporting part; post. 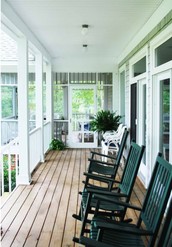 A porch is an exterior appendage to a building, forming a covered
approach or vestibule to a doorway.

A portico is a structure consisting of a roof supported by columns or
piers, usually attached to a building as a porch.

A quoin is a wedge-shaped piece of wood, stone, or other material, used
for any of various purposes. 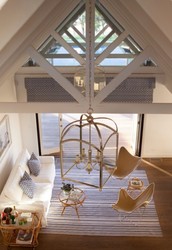 A rafter is a series of timbers, usually having apronounced slope, for

supporting the sheathing and covering of a roof.

A roof is the external upper covering of a house or other building.

A sill is a shelf at the bottom of a window inside a room. 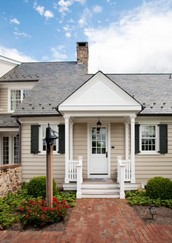 A stoop is a small raised platform, approached by steps and sometimes
having a roof and seats, at the entrance of a house; a small porch.

Stucco is an exterior finish for masonry or frame walls, usually
composed of cement, sand, and hydrated lime mixed with water and laid
on wet.

A tower is a building or structure high in proportion to its lateral
dimensions, either isolated or forming part of a building.

Transom light is a crosspiece separating a door or the like from a
window or fanlight above it.

Wainscot is wood, especially oak and usually in the form of paneling,
for lining interior walls.

Follow Sydney Blaas
Contact Sydney Blaas
Embed code is for website/blog and not email. To embed your newsletter in a Mass Notification System, click HERE to see how or reach out to support@smore.com