Kennadie is using Smore newsletters to spread the word online.

Get email updates from Kennadie:

On the morning of Sunday 30 January 1972, around ten thousand people gathered in Londonderry for a civil rights march. The British Army had sealed off the original route so the march organisers led most of the demonstrators towards 'Free Derry Corner' in the nationalist Bogside area of the city. Despite this, a number of people continued on towards an army barricade where local youths threw stones at soldiers, who responded with a water cannon, CS gas and rubber bullets. 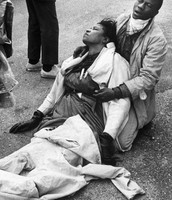 “Bloody Sunday” was televised around the world. Martin Luther King called for civil rights supporters to come to Selma for a second march. When members of Congress pressured him to restrain the march until a court could rule on whether the protesters deserved federal protection, King found himself torn between their requests for patience and demands of the movement activists pouring into Selma. King, still conflicted, led the second protest on March 9 but turned it around at the same bridge. King’s actions exacerbated the tension between SCLC and the more militant SNCC, who were pushing for more radical tactics that would move from nonviolent protest to win reforms to active opposition to racist institutions. On March 21, the final successful march began with federal protection, and on August 6, 1965, the federal Voting Rights Act was passed, completing the process that King had hoped for. Yet Bloody Sunday was about more than winning a federal act; it highlighted the political pressures King was negotiating at the time, between movement radicalism and federal calls for restraint, as well as the tensions between SCLC and SNCC.

Kennadie is using Smore newsletters to spread the word online.