Danaya is using Smore newsletters to spread the word online.

Get email updates from Danaya: 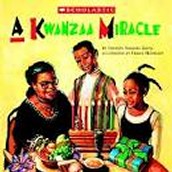 The takes place in Ashley & Darryl neighborhood.When the story is in December.The Author Chose this setting because Kwanzaa happens in December when show is on the ground sometimes .

The climax in the story was when Darryl hit Mrs. Jackson’s window with a snowball.And They Was Scared That She Was Gonna Yell At Them.But She Only Wanted To Talk To Ashely and Darryl.But Mrs. Jackson shares her pictures of her daughter and husband with the kids. Ashley and Darryl go home and ask their parents if Mrs. Jackson could be their honorary ancestor.

Ashley's and Darryl's Parents and Their Neighbors Discuss Where the Party Is Gonna Be and What Food and Who Is Gonna Bring Certain Food To The Party.But While The GrownUps Was Discussing That. Ashley and Darryl Was Planning The Surprise For The Neighbor Mrs.Jackson

Kwanzaa was getting close and all the neighbors were trying to get ready for the celebration.They had a meeting about what they should do for Kwanzaa. They decided on naming an honorary ancestor. They had to figure out who that honorary member should be.Ashley and Darryl was getting ready for the surprise for Mrs.Jackson too.

Mrs.Jackson is the meanest lady in their building.Everyone Didn't Talk To Her Because She Was So Mean To Everybody.No One Knock On Her Door For Nothing.

Ashley and Darryl decide to make her the honorary ancestor for their Kwanzaa celebration.Mrs.Jackson isn't So mean to no one anymore.

Sometimes sadness makes people do or say mean things but a little kindness toward that person can make them happy again.
"The Kwanzaa Song" by William Scott a.k.a. Djoser Pharaoh

Kwanzaa is a secular festival observed by many African Americans from December 26 to January 1 as a celebration of their cultural heritage and traditional values.

Danaya is using Smore newsletters to spread the word online.