Tiquann is using Smore newsletters to spread the word online.

Get email updates from Tiquann: 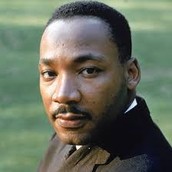 Martin Luther King Jr. was a civil rights leader. He made peaceful protests. He helped end segregation and he encouraged it by his speech, "I Have a Dream." He was one of the most important people to Georgia and will always be remembered.

Brown v. Board of Education

This was a major event between blacks and whites at the same school. An African American couldn't attend an all white school and the NAACP sued the whites and won. Blacks complained and said that they didn't receive the same services from the government like whites did. This helped Georgia because blacks could then go to all white schools.

During this event four black college students held the very first sit-in at an all white lunch counter in Greensboro, NC. They refused to leave until they were served or arrested. This helped the country because it encouraged blacks to stand up for what they want . It organized demonstrations to blacks throughout Georgia and led to various things.

Tiquann is using Smore newsletters to spread the word online.