Sania is using Smore newsletters to spread the word online.

Get email updates from Sania:

Calphurnia and Portia are the main female roles in Shakespeare’s Julius Caesar yet they still are insignificant roles compared to their husband’s/male parts. In Act 2, Scene 1, Portia talks to Brutus about his personal health when he abruptly tells her to go inside and leave him alone because it is cold and she whips back at it with all the things he has done lately.

And when I asked you what the matter was,

You stared upon me with ungentle looks.

I urged you further, then you scratched your head

And too impatiently stamped with your foot.

Yet I insisted; yet you answered not,

Brutus is rude to her and lashes out at her just when she wants to know what the matter is and wants to comfort him. Although she still ends the scene with her pleading with him to share what it is that’s bothering him but still he brushes her off as just a child and not his supposed wife, a partner.

Also almost the same thing happens with Calphurnia in Act 2, Scene 2, where she dreams of her husband, Caesar.

“Calphurnia here, my wife, stays me at home.

She dreamt tonight she saw my statue,

Did run pure blood. And many lusty Romans

Came smiling and did bathe their hands in it.”

She dreams about him in such a way that sounds horrid and when Caesar actually listens to her for once about it he decides to take her advice and stay home although later when Decius translates it a different way to him he completely brushes Calphurnia off and still leaves. Caesar immediately took the other males advice over his wife’s in a split second decision.

Both Calphurnia and Portia want and need their husbands to listen to them but both Brutus and Caesar never pay the slightest attention to them and put their own fame over their respective wives. Even though both of them are just trying to help their husbands emotionally and physically. 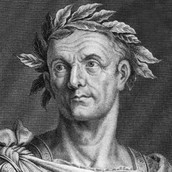 Sania is using Smore newsletters to spread the word online.