Judaism started around 4000 years ago. Abraham, a Hebrew, promoted monotheism, whereas most people in the Middle East worshiped multiple gods. Abraham was promised children whom would live in the Promised Land by Yahweh, also known as god. Abraham's descendants, known as Israelites were promised by God that they would be taken care of as long as they obeyed his laws. The Hebrews were soon enslaved in Egypt, until Moses was chosen by God to lead them out of Egypt to the promised land. At Mount Sinai, Moses was given the Ten Commandments from God. After many years of fighting, the Jews formed the Israelite kingdom, but was soon conquered by numerous other countries. This caused Jews to scatter, and after WWII and the Holocaust, Palestine was divided to finally form Israel, where the Jews would then live.

Those who practice Judaism were called Hebrews, but were soon later named Jews. Jews must follow the Torah, which are in essence the laws. The Ten Commandments, which were written in the Torah are to worship no other god then Yahweh, to not make images to worship, to not misuse the name "God", to partake in Sabbath (Saturday), to respect your parents, to not murder, to not do adultery, to not steal, to not falsely accuse someone, and to not become jealous of each other.

The holy book of Judaism is called the Tanakh. It is a collection of ancient writings that were written over around a thousand years. Jews usually go to a Synagogue in for prayers or for any religious events. In a Synagogue, the Rabbi is the one who teaches the laws of the religion, also known as the Torah.

One of the major Jewish event is Rosh Hashanah. It is the Jewish New Year festival, and fasting begins on that day. Ten days later, there is Yom Kippur is called the Day of Atonement, and Jews fast, pray, and ask Yahweh for forgiveness of their sins. The Passover takes place in the Spring and marks the Jews being freed from Egypt, the giving of the Ten Commandments, and the journey to Israel. The Hagaddah which is the story of the Jews leaving Egypt is read in the celebration with a ritual meal. There is also Hankukahh, which celebrates how the oil in the temple lasted eight days when there was only enough for a few days in order to keep the eternal light lighted. The Menorah holds eight candles to represent the eight days and a extra one to light the others. It is the central focus of prayers during Hanukkah. During Hanukkah, families get together to feast, play games, and exchange gifts.

Similarities of the Three Religions

All three religions, Christianity, Judaism, and Islam all have the same religious figure. Excluding God, who just has a different name in each religions, they all are related to the prophet Abraham. The three religions also view god as their savior and follow his teachings. They also all are monotheist religions, meaning that they only believe in one god.
Chanuka, Oh Chanukah!

The Jewish place of worship. 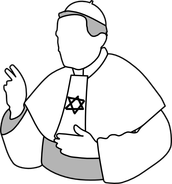 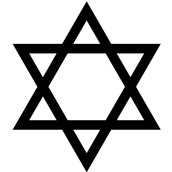 The symbol of Judaism.

The event that celebrates the oil in the temple lasting eight days when there was only enough for a few days of keeping the eternal light lighted. This is now celebrated with lighting of a Menorah's candle each day of Hanukkah as well getting together with families to pray, feast, and play games. 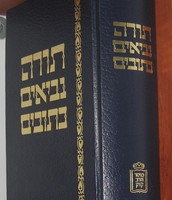 The Jews' holy book. It has writings that have been recorded for over a thousand years and also includes the Torah, which are the religious laws.

Judaism's holy city. It is the capitol of Israel, which is the "promised land" that Yahweh promised to Abraham. Jerusalem is also one of Christianity's holy city as well.