Bre is using Smore newsletters to spread the word online.

Get email updates from Bre: 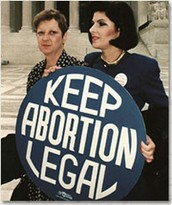 In a 7-2 decision the Court ruled that the state of Texas violated Jane Roe's constitutional right to privacy. The Court argued that the Constitution's First,Fourth Ninth, and Fourteenth Amendments protect an individual's "Zone of privacy" against state laws and cited past cases ruling that marriage, contraception, and child rearing are activities covered in this "zone of privacy." The Court then argued that the "Right of privacy" was "broad enough to encompass a woman's decision whether or not to terminate her pregnancy." It was argued that by being denying the right to an abortion, a woman was thus being denied her right to privacy and the right to pursue life, liberty and happiness. This decision involved physical, psychological, and economic stresses a pregnant woman must face.

Supreme Court ruled that a fetus was not a "person" possessing constitutional rights until it reached viability (the advanced stage of pregnancy when it could live outside the womb). The courts allowed state governments to regulate or prohibit abortions of fetuses that had reached viability, but banned such regulations on abortions in the first trimester

The Courts used the 1st, 9th and the 14th amendment stated and interpreted it where both parties would benefit as equally as possible when it comes to this controversial issue

Protest happened for both sides

Planned parenthood and other health centers give women a safe place to go get contraception and other things pertaining to their health.

Roe v. Wade, controversial when released in January 1973, remains one of the most intensely debated Supreme Court decision today. In no other case has the Court entertained so many disputes around ethics, religion, and biology, and then so definitively ruled on them all. To the political Right, critics accuse the Court in Roe of legalizing the murder of human life with flimsy constitutional justifications. To the Left, critics maintain that Roe was poorly reasoned and caused an unnecessary political backlash against abortion rights. Defenders of the decision, however, argue that Roe v. Wade was a disinterested, pragmatic ( dealing with the problems that exist in a specific situation in a reasonable and logical way instead of depending on ideas and theories) , and ultimately principled decision defending the most basic rights of personal liberty and privacy.

Bre is using Smore newsletters to spread the word online.