Stay in the know by signing up for both the BISD Remind and your student's campus Remind. 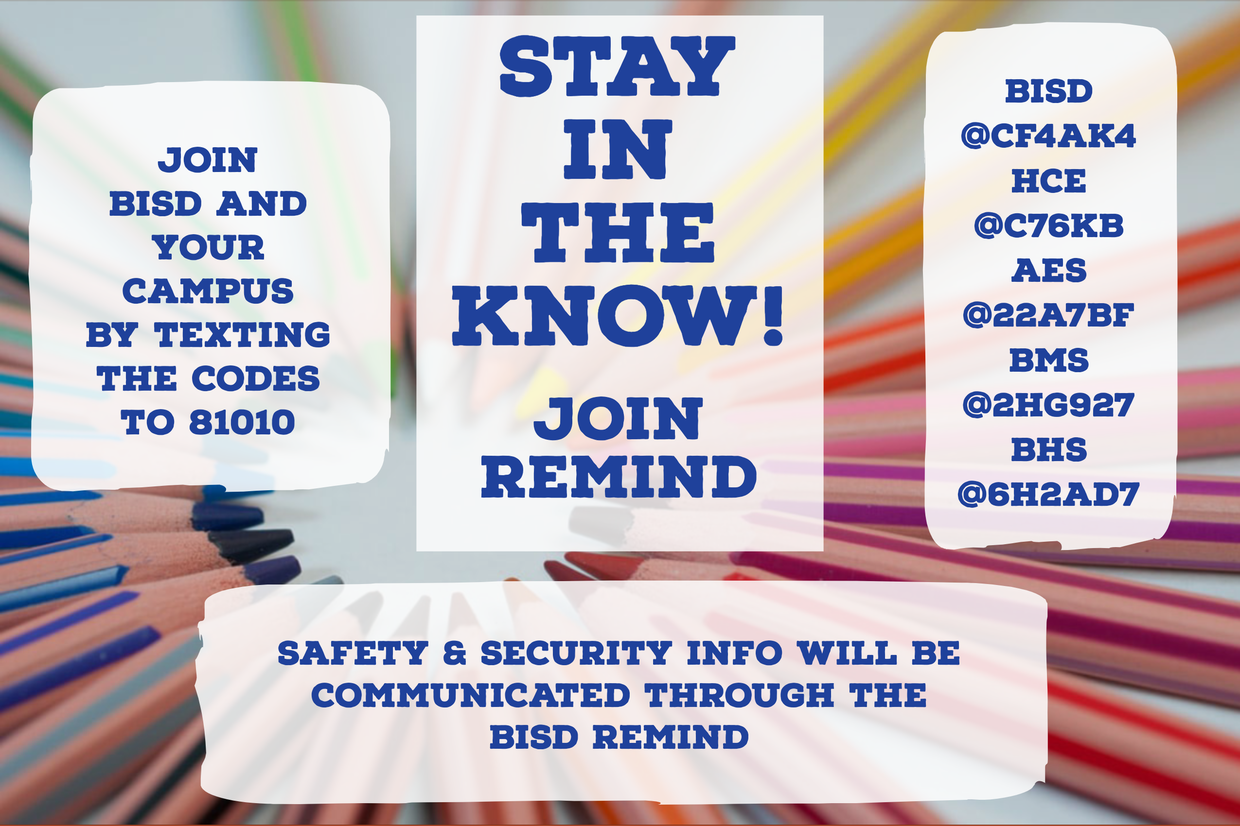 Parent Portal got a facelift this week. Click the image below to access the Ascender Parent Portal Help site. 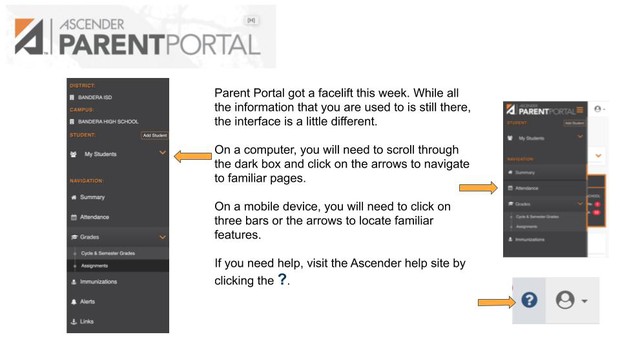 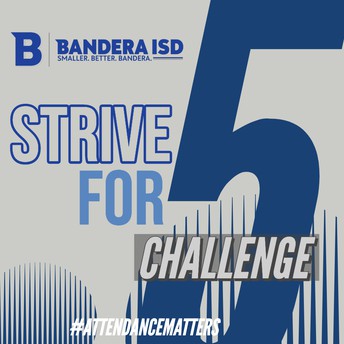 Follow these tips for keeping your child and others healthy as we head into late fall and winter. 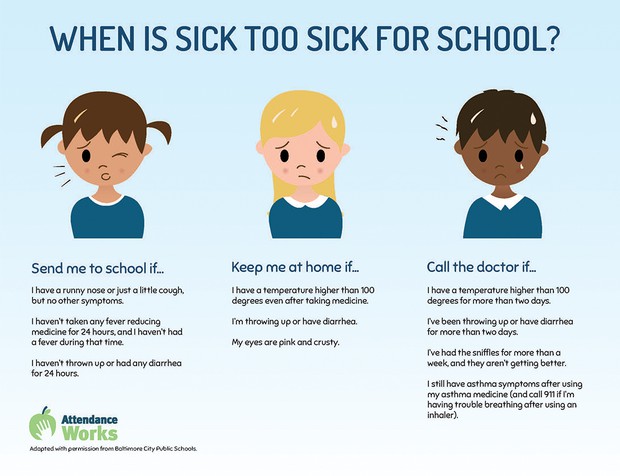 The BHS Bulldog Band earned the highest rating of "1" for the second consecutive year at the U.I.L. Region 29 Marching Contest! It was, by far, the band's best performance to date. All 3 judges gave the band a 1st Division rating. Congratulations Bulldog Band!
Uil

You are invited to the BHS Halloween Fest sponsored by the BHS Blue Hearts Club & Key Club. 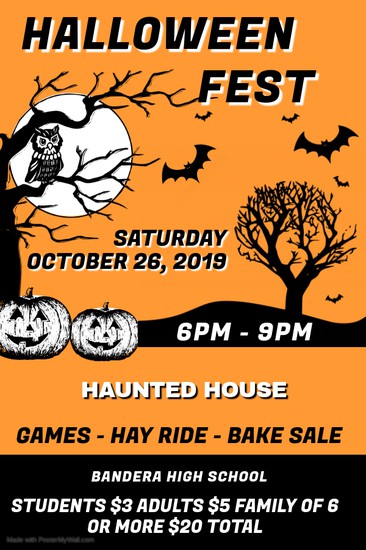 Congratulations to Bandera Middle School for hosting an amazing Space Night. The evening included a showcase of Student Spaceflight Experiments Program (SSEP) projects for a panel of judges, an interactive robotics demonstration, a planetarium, a selfie station, the BISD Food Truck, and more. What a great display of #bulldogpride #smalltownbandera and #worldwideimpact .

Two BISD classrooms will receive makeovers this winter to allow students to collaborate, communicate, and create in exciting ways. Lori Bagwell at Bandera Middle School and Miranda Little at Hill Country Elementary submitted grants to transform the physical environment in their classrooms to meet the needs of 21st century learners. BISD is so proud of all the grant applicants who chose to dream with us about what's possible in schools in BISD.

Check out this cool video to see the connection between learning environment and career preparation.

Bandera ISD is highlighted in Fiscal Notes, a publication of the Texas Comptroller of Public Accounts.Click the image below to access the article.

BISD Health and Safety: Talk to your children about school bus safety. 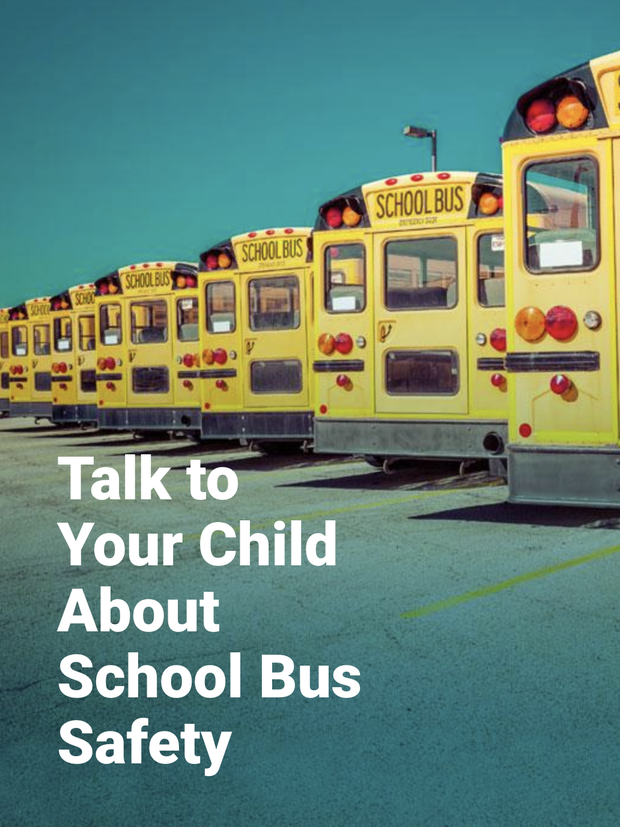 Thank you, BISD Education Foundation, for supporting teachers to pursue innovation in the classroom! 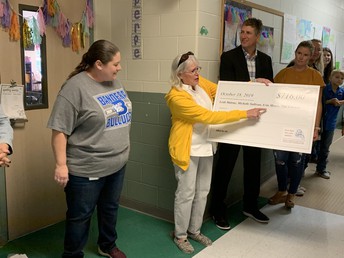 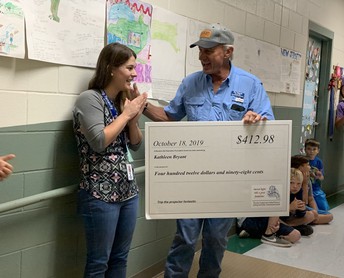 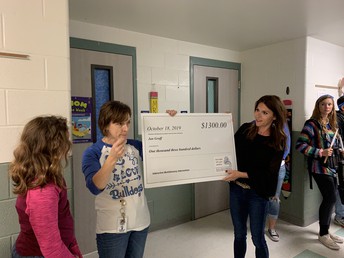 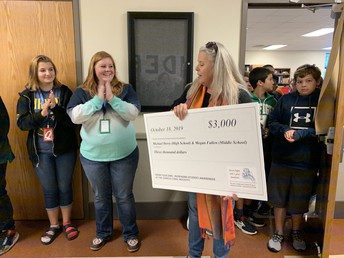 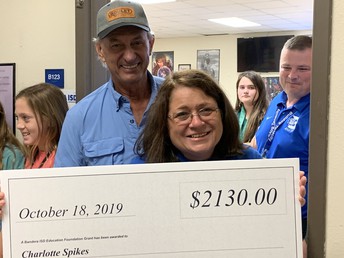 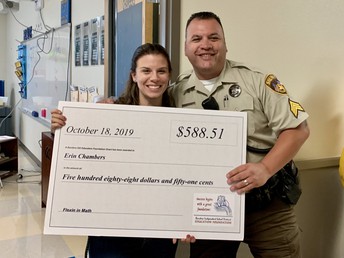 Parent Perusals: Opportunities for parents in districts served by the Education Service Center-Region 20

The Bulldogs traveled to Wimberley Friday night to take on the highly ranked Texans. The weather couldn’t have been any better for a marquee matchup under the Friday Night Lights. Both teams entered the contest unbeaten in district play. The Texans had a fast start and all the breaks, that would lead to the Bulldogs first loss of the season. The final score was Bandera Bulldogs 28, Wimberley Texans 56.

The Bulldog defense struggled with the efficient Texan passing attack in the first half of play, but would rebound to hold them to only 14 points in the 2nd half. Wimberley scored 4 touchdowns in the 1st quarter. Bandera would answer once in the 1st quarter...after a 50 yard big pass play from Gunnar Brown to Tommy Cardenas, Tommy would punch it in from the wildcat QB position from 4 yards out. The score at the end of the 1st quarter was Wimberley 28 and Bandera 7.

In the 2nd quarter the Texans would get on the board first with 2 scores. Bandera answered with a solid drive and a 7 yard TD run by Tommy Cardenas right before the halftime buzzer. Bandera would go in to the half, down 42-14. This was uncharted waters for the Bulldogs this season. When many teams would shut it down in this situation, the Bulldogs did the complete opposite. They came out in the 2nd half and played every play hard until the final buzzer! This is the kind of characteristic that good playoff teams possess.

Good blocks from the trio of Logan Williams, Gunnar Brown and Trace Decker, led to a 59 yard TD run and a 23 yard TD by Tommy Cardenas in the 3rd quarter. Blaise Slazar stayed a perfect 4 for 4 on extra points. Gage Brown recovered an onside kick by Cristian Gonzalez to give the Bulldogs some momentum and a chance at a comeback...it just wasn’t in the cards. However, this game showed the mental toughness and physical toughness of this special group. It didn’t end the way we wanted, but it was a “Dog fight” for 4 quarters and the Bulldogs never retreated or surrendered. I was dang proud of the fight in these Dogs!

Gunnar Brown and Tommy Cardenas did a solid job of filling in for Solomon MacNeil (it was a lot on their plate - with a new game plan against a highly ranked team). Gunnar Brown had 100 yards passing and ran extremely tough all night. Tommy Cardenas had 4 touchdowns, 221 yards rushing and 55 yards receiving...his punishing runs and breakaway speed was a problem for the Wimberley defense (even with them keying him all night).

Your Bandera Bulldogs are 6-1. We have a home game vs Llano this Friday night. Come out and support this TEAM as we regroup and look for win #7...at our house!!! 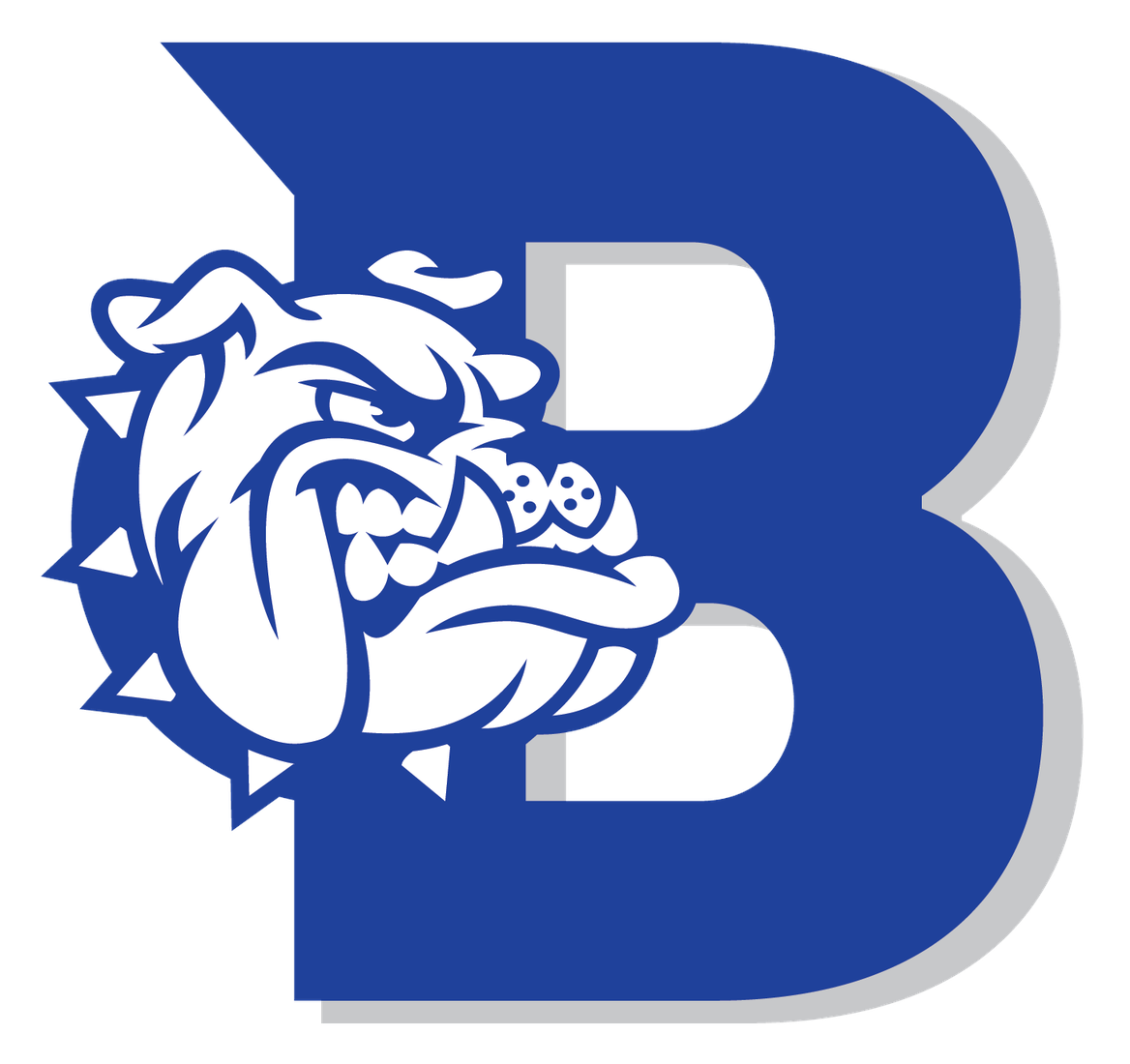 What's Happening in BISD Next Week? Click the calendar below for more information. 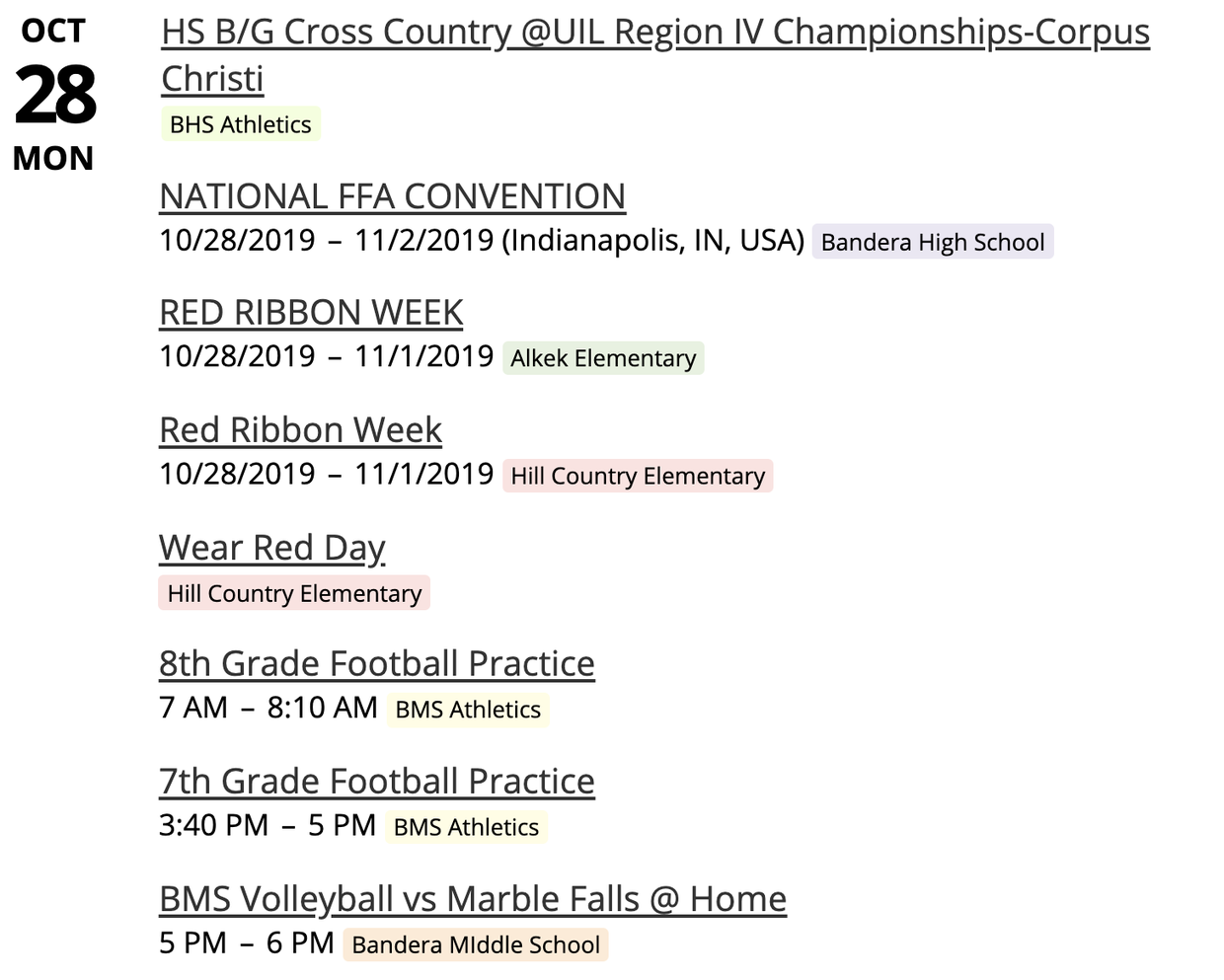