By Michael and Jazmin

By Michael and Jazmin

After World War 2 Germany was split up between England, France, America and Russia. The divide of Germany was known as East and West Berlin. This split of the country had a big impact on Communism and NATO - North Atlantic Treaty Organization.

Iron Curtain and The Domino Theory

The Iron Curtain
The Iron Curtain is the speech Winston Churchill gave in 1946 in Fulton, Missouri about his concerns of the USSR taking control parts of eastern europe like Romania, Bulgaria, Albania, and all the Slavic countries.

The Domino Theory is the effect Russia has on Eastern Europe. Communism starts slow and hits the next domino and goes faster soon it starts spreading to fast and it can't be stopped. 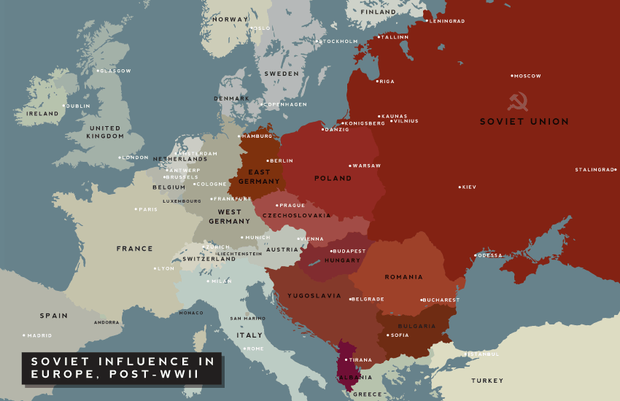 1947 the Soviet Union was invading Greece and they needed help. England took it in their hands to help them but England ran out of money. Then England asked America to help the Greeks.

Truman getting the message that England needed help and Truman went to Congress to ask for aid to give to countries fighting communist. In his speech he spoke of what would happen unless America stepped in and stopped the spread of Communism. That scared congress into giving him