The Strike of Sendai's Earthquake

The Strike of Sendai's Earthquake

The horrible earthquake struck Japan...so many loss of lives...so much houses destroyed...it was the worst earthquake in history of Japan. 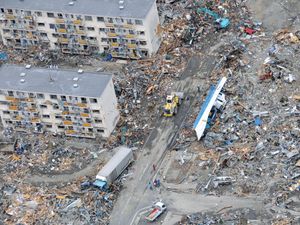 It all occurred at the 11th of March 2011,seismologists detected it 30 km below ground and 130 km far from Sendai. It was approximately 6 minutes.

Before it occurred, I researched facts about Sendai at our local church.One of them was that it was believed that Sendai was inhabited for less than 1000 years.It was found in 1600 by a land lord and a samurai,they were the first people who formed the city in Sendai.Just in time when we prayed for no disasters,a happy life,and strong health,some people (including myself) heard slight rumbles and vibrations from the ground.Just in case if there was an earthquake,I hid below a desk, and then when the rumbles stopped for a while I rushed to prepare disaster kits when no one was watching. The emergency alarm whaled,massive zigzag cracks ripped wide open.I knew I was correct,there was an earthquake.

People ran and screamed like crazy.The alarm rang again, but this time they gave emergency instructions.People were instructed to find exits,take cover from desks or tables,stay inside until the movement has stopped and it is safe to go outside and much more other instructions that I couldn't remember.It was too late.Some people already fell into the huge cracks in the ground.I was glad I saved myself because I always practice 'earthquake' lessons in my school. Whilst the disaster people from other countries were alarmed to help Sendai,since there were too much people for the rescuers in Japan to save.

When the rescue teams came,there were still way too much people to rescue.So,one of them told me to fetch them the stretchers (he pointed at the direction) because it was an easy task.After that,I also used my disaster kits to help wounded survivors.A day after the horrific disaster, many funerals were held and people acted very solemnly,some people were moaning in distress all throughout the funerals.

In conclusion, to summarise this article, it first began from a church, then a sight rumble was heard from a few people. I prepared disaster kits, an alarm warned people there was an earthquake. Another alarm instructed people, but people died already. People from other countries helped, one of them asked me to fetch stretchers. There was many funerals, and finally I interviewed some people.