Moldova is slightly larger than the U.S. state of Maryland and a bit larger than Belgium. Moldova is known as the poorest European country, but its food is known to be delicious. In this flyer, you will learn about Moldovan geography, Moldova's government, Moldovan traditional foods, some fun facts about the Moldovan flag, and more! You can even learn how to make a banana cream cheesecake and a sarmale! 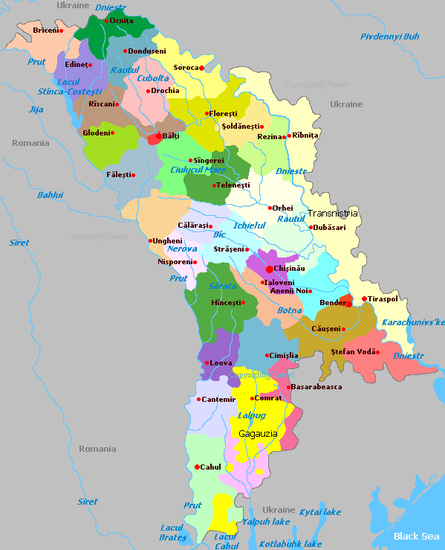 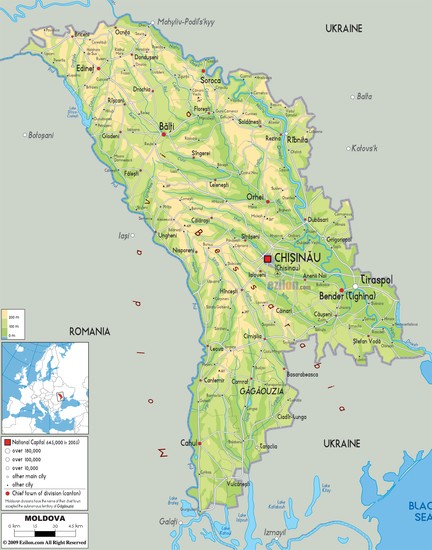 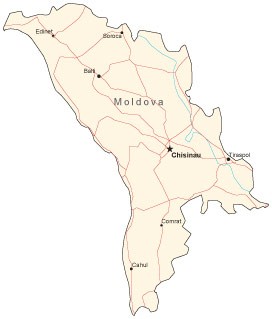 All the info you need to know

Moldova has several important cities, as there are currently 65 cities. Chisinau (the capital), Balti, Comrat, Tighina and Tiraspol are the most important cities though. Moldova is hilly with a gradual slope, toward the Black Sea. Moldova is relatively rugged, however elevations never reach beyond1,411 ft- which is the country's highest point, Balanesti Hill. Much of the terrain along the Moldavian Plateau (a part of the Carpathian Mountains) is made up of steep slopes of forest with some valleys and rivers. The Plateau is located along North East Romania, almost all of Moldova, and most of the Chernivtsi Oblast of the Ukraine. The Prut River makes up the entire western border of Moldova with Romania, but the Dniester River only forms a very small portion bordering the Ukraine. Moldova also contains the Bic River, the Colganic River and the Rut River all throughout the country. The summers are warm and long, the temperatures average about 68 degrees Fahrenheit (20 degrees Celsius). The winters are dry and usually mild, with January temperatures averaging around 25 degrees Fahrenheit (-4 degrees Celsius). Most people live in Chisinau (671,800), as it is the country's largest city and the capital. Nearly all tourists travel by plane to Moldova. If you were taking a trip from DFW to Moldova, it would be best to travel by plane, as it would take approximately 15 hours and 5 minutes, with a cost of about $3309.

Two Moldovan Parties formed a Parliamentary Democracy Government in Moldova after the parliamentary election last year. Since 1999, Moldova has been divided into ten districts. Moldova is a form of limited government. Nicole Vasile Timofti is the president of Moldova, as he was elected in 2012. The Parliament makes the laws. The only current issues is that Moldova just voted on February 19 so that in the future, they will have a new form of European Democracy. The citizens in Moldova do have similar rights that we do in the U.S. We both elect a president, have 3 branches, we vote on our representatives, and the parliament makes the laws. We both have forms of democracy and elections. Moldova is not a member of the United Nations, and, since Moldova is Europe's "poorest" country, they usually do not have much country interaction and they do not often offer foreign aid. However, the United States has given aid to Moldova, and some other European countries offer aid.

Moldova has no natural resources-it completely depends on imports (mainly from Russia)- aside from a very little amount of gas, oil reserves, and gypsum. The currency is called Moldovan leu; one U.S. dollar would equal $18.44 Moldovan leus. The most exportable items are petroleum, bauxite, aluminum, chemicals, steel, vegetables, manufactures, animal products and textiles. Moldova usually ships these products to Italy, Germany, Russia, and Romania. The most important importable products come from Germany, Russia, Italy and Ukraine, and the products mostly consist of chemicals, textiles, fuels, and mineral products. The GDP per capita is $2,229.62 U.S. dollars ($41,118.68 Moldovan Leu) I would not consider Moldova a wealthy country compared to the United States because it is the poorest European country, they have very little to live upon, and they are very small country.

The official Ethnic Groups of Moldova are: 75.8%-Moldovan, 8.4%-Ukrainian, 5.9%-Russian, 4.4%-Gagauz, 5.5%-other. There have not been any conflicts between the groups. All children have to go to school until they are 18, just like the U.S. Though all children have to go to school, the parents have to pay for them. Men and women have equal rights in Moldova. The literacy rate in Moldova is 99.1%, with males as 99.7% and women as 98.6%.

The official language of Moldova is Romanian, and 98.5 percent of all people in Moldova are Orthodox Christians, even though the government limits the activities of the church. The Moldovan flag became its own on May 12, 1990 and it remained official after Moldova's independence from the Soviet Union in 1991. The flag was based off the Romanian flag, so that it can represent Moldova's heritage with Romania. In flags, every color has a meaning. Therefore, the blue stripe represents determination, liberation, alertness and good fortune. The yellow signifies wealth and energy, as in the sun. Some people also use yellow to signify happiness. The red stands for power, revolution, vibrancy and war (symbolic of bloodshed). Other meanings include courage and domination, while it can also be viewed as an alert of danger. The symbol in the middle is the coat of arms and it consists of the eagle of Walachia, it was holding an Orthodox Christian cross in its beak and an olive branch in one talon, with the scepter of Michael the Brave of Walachia in the other. 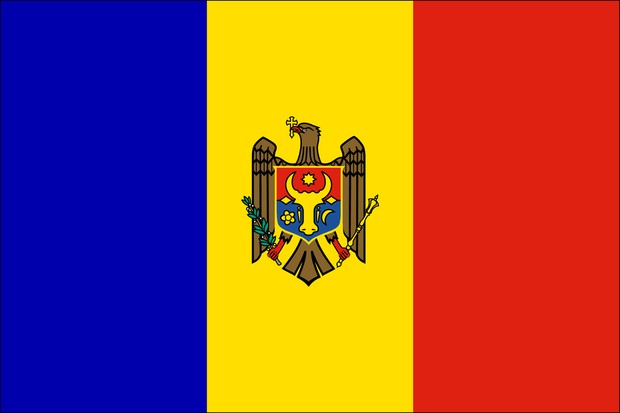 January 1 is New Year's Day, and January 7 is Orthodox Christmas Day. March 8 is International Women's Day, April 13 is Orthodox Easter Monday, May 1 is Labor Day and May 9 is Victory and Commemoration Day. Finally, August 27 is Independence Day and August 31 is Limba Noastra (National Language Day).

Traditional Moldovan food is mostly based on meat, fish, vegetables, cereals, and cheese. The food incorporates elements from Russian, Ukrainian, Gagauzian, and Bulgarian dishes, but it used to incorporate food by the Greeks. Moldovans love the maize served with fried meat, sour cream, and a type of Moldovan cheese called brinza. There is also a dish called sarmale, which is made of rice, meat, and vegetables rolled in cabbage leaves. Another popular dish is Placinte, which are pies stuffed with brinza, potatoes, cabbage or apples. Moldovans also have a special taste for wine. 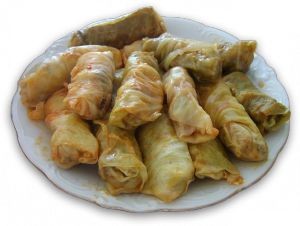 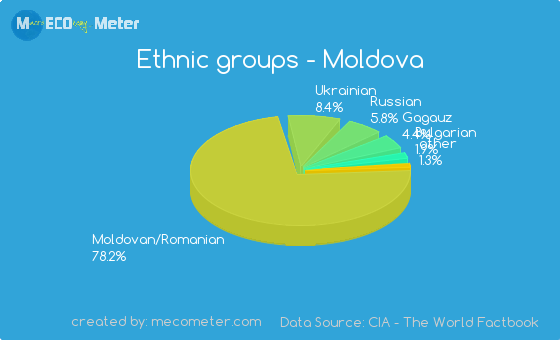 Based on these data sets, I conclude that most people are Moldovan and they have the most GDP Per Capita in January 2014. In the second graph, it shows that in January of 2014, Moldova had 1,136.23 GDP per capita, and it is good to have a high GDP. In the first graph, it shows that just about 3/4 of Moldova's population is Moldovan. Moldova is a very poor country, so it makes sense that most people are Moldovan, as not many outsiders desire to live there. Currently the Moldovan government are working on a better system to work towards more wealth than they currently have, so maybe in a few years the graphs' numbers will change.