Get email updates from Lola:

The First Bank of the United States was necessary due to the crippling amount of debt the newly-formed U.S. was under due to the Revolutionary War, and the fact that up until this point, every state had it's own currency that could only be used in that state. The bank was created in order to help relieve a lot of war debt, and to unify the country's currency

The Second Bank of the United States was forged for a lot of the same reasons the first was. The War of 1812 had left a sizable debt on the American's shoulders , and inflation was skyrocketing upward because of private banks issuing a large amount of notes. There was, however, some opposition of this bank from protesters that disliked the idea of a Central Bank and it's control over them.

During the Civil War, banking was vastly different than what we practice today. A unified monetary system had yet to be established, and this posed a problem when the Civil War broke out in 1861. Wars are expensive, and they're hard to fund when everybody has some different kind of currency. That's why, on February 25, 1863, President Lincoln signed the National Currency Act, which unified the nation's currency and loosely tied banks together in the process.

The National Banking Act of 1863 was really the government's attempt at establishing some dominance over the nation's banking system without forming a central bank. The goals of this act was to create a system of national banks. To charter them out, loosely like what we do today. The second goal was to create a unified currency, which was also the goal of the National Currency Act. The third- create a secondary method of funding the war, (backing up the currency) 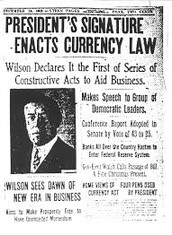 The Great Depression was the largest economic downturn of the civilized Western Society. It all began when the Stock Market crashed and sent Wall Street into a panic, and wiped out millions of investors. From this, consumer spending and investing dropped, which definitely did not help. Banking panics ensued, and consumers began demanding their deposits in cash, which forced banks to liquidate loans in order to supplement their insufficient amounts of cash. Many banks were forced to close their doors.

The Glass - Steagall Banking Act was put into place in order to separate commercial and investment banking activities. This was to prevent insider trading, and other suspicious banking activity, which is believed to have been the culprit behind the stock market crash in 1929

The 1970's is when the Glass - Steagall Banking Act became controversial. Banks were frustrated that they were limited in their banking activities, and feared losing customers if they weren't allowed more freedom.

In 1982, the regulations established in the Glass - Steagall act were loosened a little. This became a problem when Savings and Loans banks took advantage of the deregulation, and began giving out more money than they could. This hit the stock market pretty badly, and the federal government had to end up giving investors their money back, which heightened the national debt extremely.

This act broke down the walls established between banking and insurance. This allowed more banks/companies to do more things. For the most part, it was a good thing, despite the fact that it reduced competition and allowed the possibility of a universal bank

Follow Lola Renae
Contact Lola Renae
Embed code is for website/blog and not email. To embed your newsletter in your email, click HERE to see how or reach out to support@smore.com