supriya is using Smore newsletters to spread the word online.

Get email updates from supriya:

Harvard is the oldest institution of higher education in the United States. This school was established in 1636. Harvard has over 20,000 degree candidates including undergraduates, and professional students. It is also the #2nd national university (2014).

This statue you see is John Harvard. The school is named after his last name! 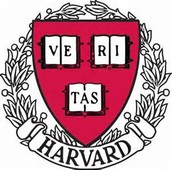 Some of our U.S presidents received an honorary degree like John Adams (1781), John F.Kennedy (1956) and etc. The colors of Harvard are crimson because Harvard undergraduates held a plebiscite on May 6, 1875 and crimson won by a wide margin. The students newspaper is called magenta because that color was in the running for the Harvard color but lost.so they named the newspaper "the Magenta".

the location of Harvard is in Massachusetts which is famous for the intellectual activity of its writers and educators. Harvard has no mascot! John Sassamon is the first Native American to go to Harvard. The acceptance rate for Harvard is 5.9%. For athlectics there is a lot for example, track & field, baseball, and etc.

supriya is using Smore newsletters to spread the word online.