Here is a summary of this cool link! by Emily Nadel

Here is a summary of this cool link! by Emily Nadel

A. W. H. Phillips studied wage inflation and unemployment in the UK during the late 1800’s to mid 1900’s to contribute his macroeconomic theory of the Phillips curve. The Phillips curve illustrates the relationship between the rate of inflation and the unemployment rate. He theorized the inverse relationship between unemployment and wages. He also made connections among the unemployment rate and the labor market. The Phillips curve represents this relationship. This extended further beyond just wages and economists applied it to the relation between price inflation and unemployment in which “the prices a company charges are closely connected to the wages it pays.” Edmund Phelps and Milton Friedman turned to argue that only real wages concerned the scenario in which the real wages adjusted to have the labor supply equal to the labor demand in order to come up with the “natural rate” of unemployment. They went on to argue that the government could not switch high inflation for low unemployment because then the purchasing power of the worker’s wages would then be reduced due to the inflation as well as prices increasing. In the short term, workers suffer from “money illusion” in which they see that their money wages have risen and willingly supply more labor which further decreases the unemployment rate without realizing that the purchasing power has fallen initially because prices rose faster than expected; however, over time they learn how to expect and anticipate these changes in prices accordingly. Economists began to accept a part of both Friedman’s and Phelps’s analyses that “there is some rate of unemployment that, if maintained, would be compatible with a stable rate of inflation.” In other terms, some call this the “nonaccelerating inflation rate of unemployment” (NAIRU). Government and businesses use the Phillips curve as a fundamental element of almost every macroeconomic forecasting model and it is accepted by most otherwise diverse schools of macroeconomic thought.

Here is a helpful video for further explanation!

Some Helpful Graphs and Visuals! 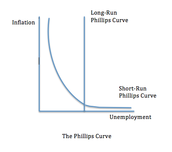