Get email updates from Jacey:

This is a government that controls the political, economic, social, intellectual, and cultural lives of its citizens. Joseph Stalin outmaneuvered his rivals to gain control of the government. Stalin was determined to transform the Soviet Union into a powerful industrial state. Stalin created a new kind of government, today called a totalitarian state. In a totalitarian state, the government is a single-party dictatorship that controls every aspect of the lives of its citizens. Individual rights count for nothing. Citizens must obey the government without question, and critics are silenced. Also, the totalitarian state supports extreme nationalism. Stalin used propaganda, censorship, and terror to force his will on the Soviet people.

German U-Boats in the Atlantic

Battle of the Atlantic was a war by German U-Boats against Britain’s marines. For nearly six years, Germany launched over 1,000 U-Boats into combat, in an attempt to block British Isles, by forcing the British out of the war.

The Japanese surprising the U. S. from planes above, bombing and destroying our ships.

The first U. S. warship sunk by a U-boat. Seen on March 9, 1932 on her recommissioning in Philadelphia

Rise of the Totalitarian Regimes

Joseph wanted to control the government so he created a new one called the Totalitarian State.

In 1936, FDR proposed that the Cash and Carry policy replace the Neutrality Acts of 1936 at a session in the US Congress. The act would allow the sale of goods to opponents, as long as they arrange for the transport using their own ships and paid immediately in cash. The act would allow the US to stay neutral, while still being able to provide material aid for Britain and other countries in the war. However, the act would eventually cause Britain and European Allies to become in debt, so a new plan would have to be revised, called the Lend-Lease program, that would demand payment at a later time. The act contributed to the U.S. maintaining their non-intervention in the war, until Germany and Japan both declared war on the U.S.

The Lend-Lease Act of March 11, 1941, was the principal means for providing U.S. military aid to foreign nations during World War II. The act authorized the president to transfer arms or any other defense materials for which Congress appropriated money to "the government of any country whose defense the President deems vital to the defense of the United States." Britain, the Soviet Union, China, Brazil, and many other countries received weapons under this law. By allowing the president to transfer war material to a beleaguered Britain--and without payment as required by the Neutrality Act of 1939--the act enabled the British to keep fighting until events led America into the conflict. Although the act seemed right to many people, it brought the United States one step closer to entering the war. One person that didn’t agree with the act was Senator Robert Taft. He believed that the act would give the President power to carry on a kind of undeclared war all over the world, in which America would do everything except actually put soldiers in the front-line trenches where the fighting is. 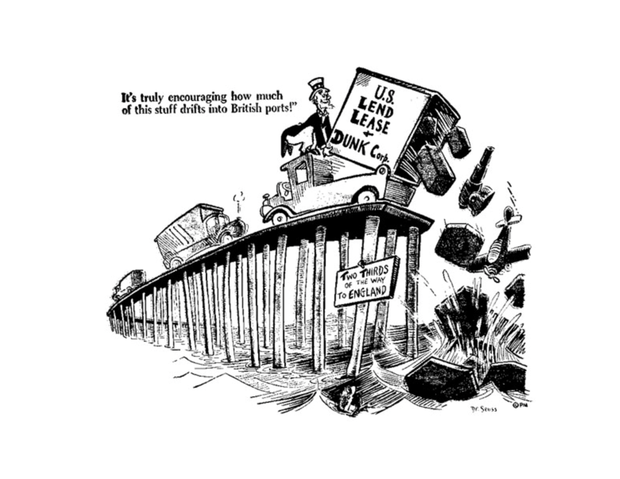 The Attack of Pearl Harbor occured on the morning of December 7, 1941. The Japanese had a drastic surprise attack on the U. S. Naval Base. Within 2 hours of the horrific surprise we had already lost 2400 Americans, 21 ships were either sunk or badly damaged and 188 or more U. S. aircrafts were demolished. The reason for the Japanese attacking was because they were tired of trying to come to solutions with the U.S. Their plan was to completely wipe out the United States Naval Power before an announcement was made. Japanese attempted to stay hidden and out of sight so they avoided many shipping lines. Starting at 6:00 am the Japanese began their first wave of complete destruction. Before the bombs had gone off Commander Mitsuo Fuchida said allowed, "Tora! Tora! Tora!" (meaning tiger! tiger! tiger!) a code word simply giving the hidden message that the Japanese had caught them by total surprise. The Japanese's first plan was to take out the U. S. 's airplanes. For the very few planes that got into the air they soon found out that they were greatly outnumbered. At 9:45 the Japanese returned back to their aircraft carriers. As a result 2,335 servicemen were killed and 1,143 were wounded from the U.S. compared to 29 aircraft and five midget subs from the Japanese.

Follow Jacey Cauhorn
Contact Jacey Cauhorn
Embed code is for website/blog and not email. To embed your newsletter in a Mass Notification System, click HERE to see how or reach out to support@smore.com
close