Before heading out to the zoo, learn a little bit about the fascinating Fisher!

Visitors will be in awe over this furry and fierce animal! This species can grow up to around 3 feet, with just over ⅓ of that being the length of their tail alone! Generally, they weigh 4-11 pounds. Their thick fur is a dark brown to black color with lighter patches on its underside. It has quite short legs, with retractable claws on the end of its 5 toes per foot.

Tracks of a Fisher in snow

In the wild, Fisher cats are generally carnivorous, feeding off of smaller, weaker mammals such as rodents, various birds, hares and rabbits, and shrews. If the fisher cat cannot find prey, they will resort to consuming things like berries, nuts, and insects. Unlike most species, the fisher can actually attack and hunt Porcupines. They know to strike in the face where there are no sharp quills to weaken the creature. This is just one of the many things that show how vicious and sneaky the animal can be. Only at the new Raymond Zoo will you be able to get this close to a fisher and not have to worry! 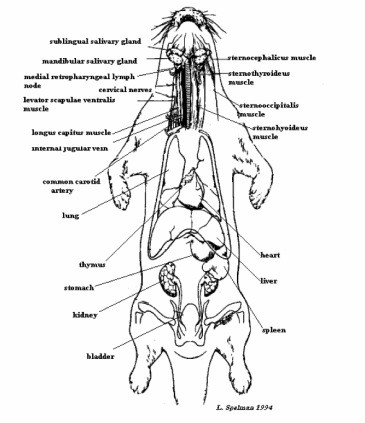 diagram of the internal anatomy of a River Otter, a close relative of the FIsher

If you are interested in seeing a local wild animal in a safe environment, the Raymond Zoo's Fisher exhibit is perfect. Fishers thrive in wooded areas, like the coniferous and deciduous forest biomes. They live solely in North America, with the vast majority being near or around the Canadian border, as shown in the image below. While there is a fair number of fishers in California near the Sierra Nevada in California, most have been seen in New England and Canada. Some specific states to have seen a fisher cat include Minnesota, Tennessee, New Hampshire, Maine, West Virginia, New York, Idaho, Montana, and Vermont. Parts of Canada to report the presence of fishers include Nova Scotia, Manitoba, and Ontario. 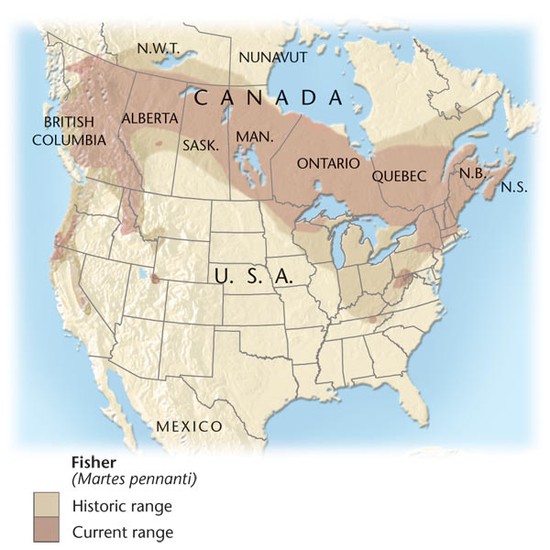 It is not uncommon for the Fisher to be mistaken for other animal, especially if the person only catches a glimpse of it. Fisher cats are closely related to weasels, minks, and otters, amongst many other members of the Mustelidae family. All of these creatures have very similar body structures, with long bodies and short legs.The main difference between these three creatures and the Fisher is the long, fluffy tail the Fisher has.

With deforestation becoming more and more of an issue, fishers are put in danger. They typically seek shelter in wooded areas. Major causes of trees being cut down are to make room to build roads, to use for construction and as firewood, and the ever growing logging industry. Trapping also poses a threat to these creatures, which is why many states have set up laws against the harm and hunting of the animal.

Young fishers are vulnerable to predators, such as owls and coyotes. Mange, fleas, and tapeworms are also not rare occurrences in fishers, but their generally solo lifestyle and not reusing their dens helps to cut down the number of cases.

These creatures have excellent sense that allow them to be great hunters. Their strong sense of smell allows them to stalk prey and follow their path of scent. They also have excellent vision which allows them to spot rather agile animals like hares and rodents from quite a distance. They are quite viscous animals and their ability to easily find and seek out other animals makes them even more of a creature to be feared.