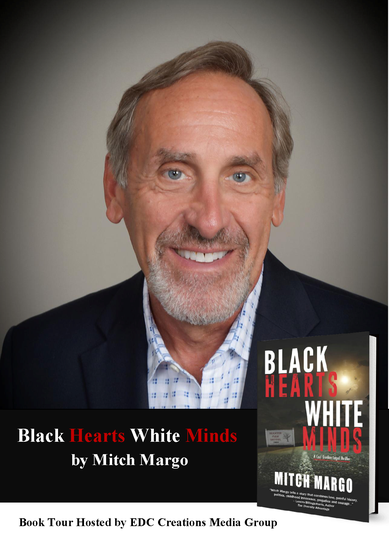 Black Hearts White Minds, a novel by attorney Mitch Margo has been compared to Harper Lee’s To Kill a Mockingbird. An inheritance across racial lines challenges every tradition in the segregated town. Set in the deep south, 1964 Alabama, the story is about injustice and honor acting in concert as tensions between whites and Blacks in the state’s fifth largest town of Stockville rise.

Historical fiction shrouded in legal battles and intrigue, a New Yorker lawyer with his own personal fight forges bonds with a Black family matriarch standing against the way things have always been.

Heroism for hatred, honor for life, controversy in death, friendship and forbidden love fill the pages of this remarkable tale of societal ills, culture clashes and political change.

Listen to Mitch read from the book: http://www.audioacrobat.com/note/CPlHwp5k 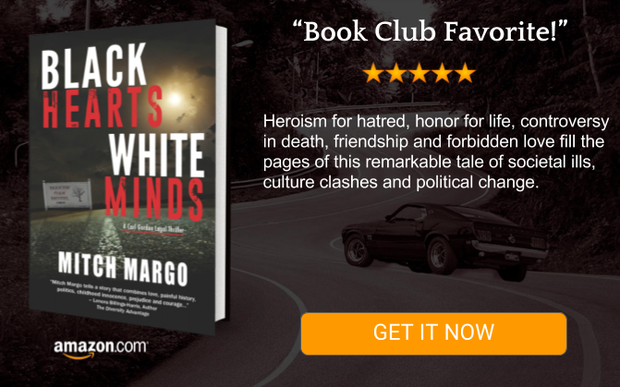 Carl Gordon is nothing if not impulsive.

He’s a New York Assistant U.S. Attorney who tries to escape the nightmares of his wife’s death by lying his way to Stockville, Alabama to enforce the Civil Rights Act. He arrives unprepared for life in the segregated South, where the Ku Klux Klan controls the town. It’s not long before the Klan turns its attention to the outside agitator, him.

Oleatha Geary wants no part of it.

She’s the tough and tender Black family matriarch, who inherits a grand home in an all-white, race-restricted neighborhood called Northwoods. She doesn’t want the home, but she’s pressured by her adult children to fight Stockville’s most powerful white citizens.

Stockville, Alabama is about to explode.

It’s the summer of 1964. Stockville is Alabama’s 5th largest city and its powerful white citizens think they’ve got “their coloreds” under control. Not so fast. Segregation is crumbling. Nonviolent protests have started and a clandestine group of Malcolm X disciples is planning its revenge against the KKK. 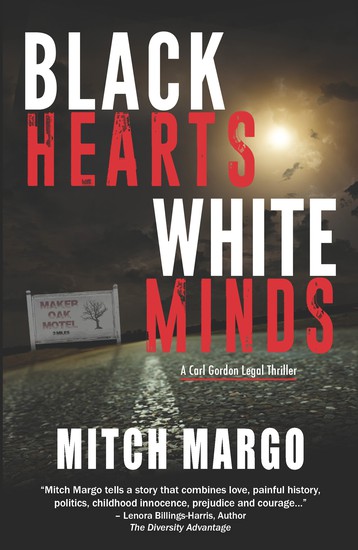 “As I read Black Hearts White Minds, I was reminded by turns of Harper Lee, Willie Morris, and John Grisham. Like Grisham, Mitch Margo is an attorney; like Morris, he's a former journalist, and like Lee, his writing is evocative with a moral center straight and true…”

"The early sixties are often thought of as a time of lost innocence. Margo reminds us that the era was anything but innocent in the American south. His novel rings with authenticity and his characters’ struggles in the fictional town of Stockville, Alabama foretell the problems we still face today. Stockville is not really so far from Ferguson.

“… Black Hearts White Minds transports readers to a time and place in American history … when the Civil Rights movement was slowly gaining traction, and segregationists, including the Ku Klux Klan, would stop at nothing to trounce the efforts of blacks and whites fighting for justice… Margo has crafted a narrative that is equal parts engrossing, heartbreaking and hopeful, populated with richly drawn, compelling characters, and an overarching essence that captures the enduring nature of the human spirit, no matter the obstacles.”

“… Mitch Margo sets his first novel in one Alabama town, allowing him to explore the era on a distinctly human scale through ordinary people and not so ordinary events…. ⦋Margo⦌ has a knack for dramatic structure and a sharp eye for contrasting, engaging personalities. And his plot twists manage to be simultaneously startling and entirely credible, no mean feat.”

“Mitch Margo tells a story that combines love, painful history, politics, childhood innocence, prejudice and courage…You will want to read it more than once.”

A Guide to Making Diversity Work

“I simply loved this book, the story, the characters, and of course the basketball concept...on his first time out, Mitch Margo scores a triple double...”

“Black Hearts White Minds … is a lively, engrossing novel about two families struggling with the brutality of Jim Crow, one black … the other white…The plotting is deft, the characters vivid, and the ambience as thick as Southern humidity. Mitch Margo knows how to tell a story.”

Join Mitch Margo for the Black Hearts White Minds online media campaign with Ella D. Curry. We are seeking active social media ambassadors. Mitch encourages current and new readers to stop by for a visit to meet the characters from Black Hearts White Minds. Please share the banners below on your social media pages. Link the banners to Mitch's tour page: https://www.smore.com/yacuy

“Margo has crafted a narrative that is equal parts engrossing, heartbreaking and hopeful, populated with richly drawn, compelling characters, and an overarching essence that captures the enduring nature of the human spirit, no matter the obstacles.” 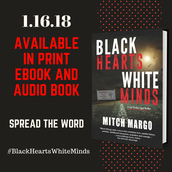 Invite Mitch Margo for an Interview

Black Hearts White Minds - what does it mean?

Become a Host on the Blog Tour

We are seeking active social media ambassadors. Mitch encourages current and new readers to stop by for a visit to meet the characters from Black Hearts White Minds.

A former reporter for The Detroit News and Los Angeles Herald Examiner and a syndicated columnist for 14 years, Mitch Margo is a native New Yorker and St. Louis trial lawyer. He's witnessed the clash of cultures which are woven into his first novel, Black Hearts White Minds. Much of the story is drawn from his personal experiences, interviews, and hundreds of hours of research. He credits his eclectic law practice for a new storyline every few days.

As general counsel to the Missouri Valley Conference, and a former youth coach, Mitch has an insider’s view of basketball that enables him to write about it authentically. He's also a member of the Washington University Sports Hall of Fame, at one time holding the school record in just about every baseball statistic. He's proud of his days as a student/athlete, but hasn't lost sight of the fact that you can’t get too much farther from Cooperstown and still be in a hall of fame.

Mitch Margo would love to speak for your organization!

Mitch is an experienced speaker with a core message, an engaging manner, and a warm presence. Having written from the heart a book that shows the triumph of youth and sports over racial tensions and legal obstacles, Mitch is eager to share his message about “Where do we go from here, and how do we get there.”

– How self-esteem can come alive in the context of sports

– Race Relations and what it means to be an American

– Is the “Melting Pot” still a relevant concept?

– How can we move to higher ground and regain civility and mutual respect?

– Disputes of many kind